Skip to content
My alarm went off at 5 a.m. this morning and I laid there for a few moments wondering what the weather outside would be like. It was one of those nights where I had dreams of sleeping in and missing my fishing trip! I looked outside to a fresh blanket of snow and heard the wind howling. I awaited a text from a friend Lenny, who would make the call on whether or not we should head out for lake trout today. At 5:30 a.m. ‘Should we try it?’ My reply ‘I’m game!’ So I got ready and off I went outside with arms full of gear to load up the truck. I tried the passenger door which was frozen shut and the rest of the truck was covered in a sheet of ice and snow on top – great. I set everything down, pried the driver door open and cranked the heat in attempt to melt the windshield enough to scrape it off. I thought to myself ‘the things we do for fishing’, hopped in the truck and off I went to Loughborough Lake.

I arrived and met Lenny, unloaded my hut from the back of the truck, packed the gear into it and we set off on the ATV. We made it to the spot Lenny picked and set up. He fished outside and I set my hut up and began fishing in 55 feet of water. A few minutes later Lenny hooked one! 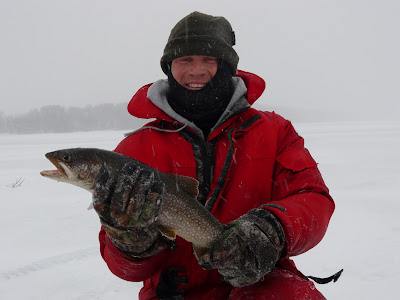 What a beautiful fish! My first time seeing a lake trout in person. This gave me hope that there would be more!

I used a white tube jig on my baitcaster to start and fished just off bottom, marked a few fish and even had some chasers, but no commitment. I switched over to my spinning set up with a Pearl Jigging Shad Rap. I’ve only ever fished for walleye and panfish while ice fishing, so I am confident with the Jigging Raps and how to work them. I began jigging for awhile and not long after I finally hooked into my first laker!! It hit like a train and thrashed around like mad! I had it right up to the hole and LOST IT! Nooooo! It was disappointing, but very exciting none the less. I knew I was doing something right, and just needed to work on landing these aggressive fish properly.

My next hit and I landed my first ever lake trout!!! 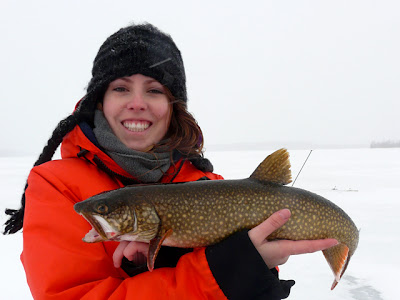 Then my second ever lake trout: 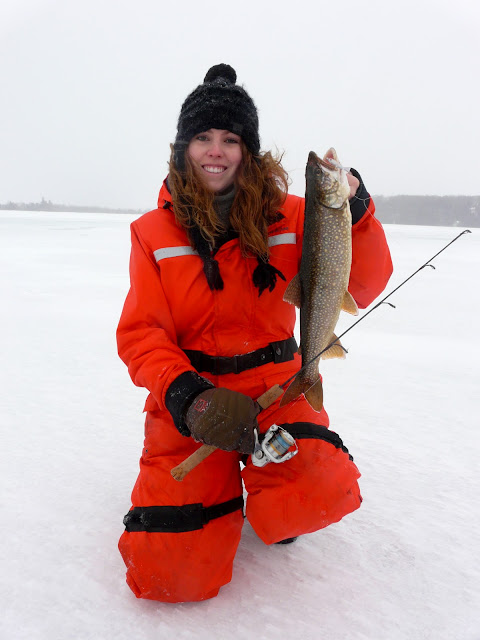 By now I was feeling great! Something about catching a fish through the ice really warms you up on the coldest of days. At this point I was satisfied with even catching my first laker, and couldn’t believe the fight in these fish! They come up on the flasher so quickly that you must be on your game to set the hook. I fished at the bottom of the water column the whole time and marked fish sitting right on bottom. I would pull my bait up in a ‘quiver’ motion while reeling and then drop down and repeat. Every so often I would reel in a few inches of line and jig higher off bottom, then drop back down. When I marked a fish I would quickly work up and away from them. This is when I got a nice strike! I had the fish halfway to surface when it freed itself. I pulled up to check my lure for any twists, dropped back down and got SLAMMED on the way down at 20 feet. This was a good fish, could it have been the same one? I took my time and the fish was taking drag – love that sound! When I got it up to the surface I started yelling for Lenny and cheering ‘GOOD FISH ON!’ This is the point where it feels like a life and death situation – have to land this one! I worked the fish slowly to the hole and got a glimpse… wow! Pulled the fish up through the hole, flipped open my hut and was cheering ‘Look at this beast!’ I couldn’t believe I landed it the way it was fighting! I suppose you would like to see it 🙂 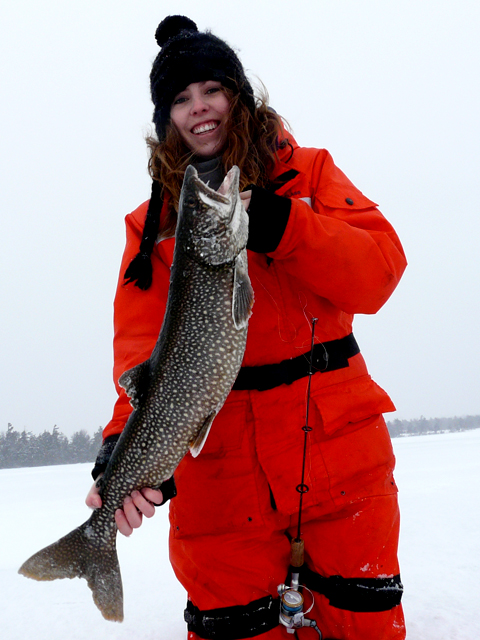 All fish were released after photos and I am still smiling! What a great morning on the ice! Another fish off the list. Thanks Lenny!