I absolutely love targeting and catching a new type of fish. It’s fun to learn about the species and learn new fishing techniques to broaden my fishing experiences. I had been out once in the past for a few hours in search of musky, had one follow and no hits. I’ve heard about how they are ‘the fish of 10,000 casts’ and just hoped that someday I would get the chance to land one.

My friend Greg Amiel invited me out to fish on Friday for salmon, so I took the day off. Thursday night the weather forecast on Lake Ontario was not looking promising (wind-wise), so he asked me if I would be OK with fishing for musky instead. Of course I said ‘Yes!’ and was really excited to try for musky! I had a positive attitude, but knew that they were no easy task to land. Something new is always fun!

I got up at 1am (yes, that early!) on Friday, got ready and left home at 2am to head to Greg’s place near Toronto . Greg and his fishing buddy Arnaldo were ready to go when I got there at 5am, so off we went. I fell asleep for a little while on the way there, so I have no idea which lake we were on 😉 Let’s call it, ‘Lake X’ in the Kawarthas. We all have our own Lake X somewhere, right? Wink, wink 🙂

We fished hard, trolling and casting and covering a lot of water. I was casting when I had my first follow. I reacted fast doing the ‘figure 8’ as Greg showed me. The fish startled me, but I was excited to see my first musky! However, this fish was not interested. It gave me hope!

We were trolling when the first musky hit, and it sounded like a salmon peeling line! I could not have been any happier reeling in my first ever musky! 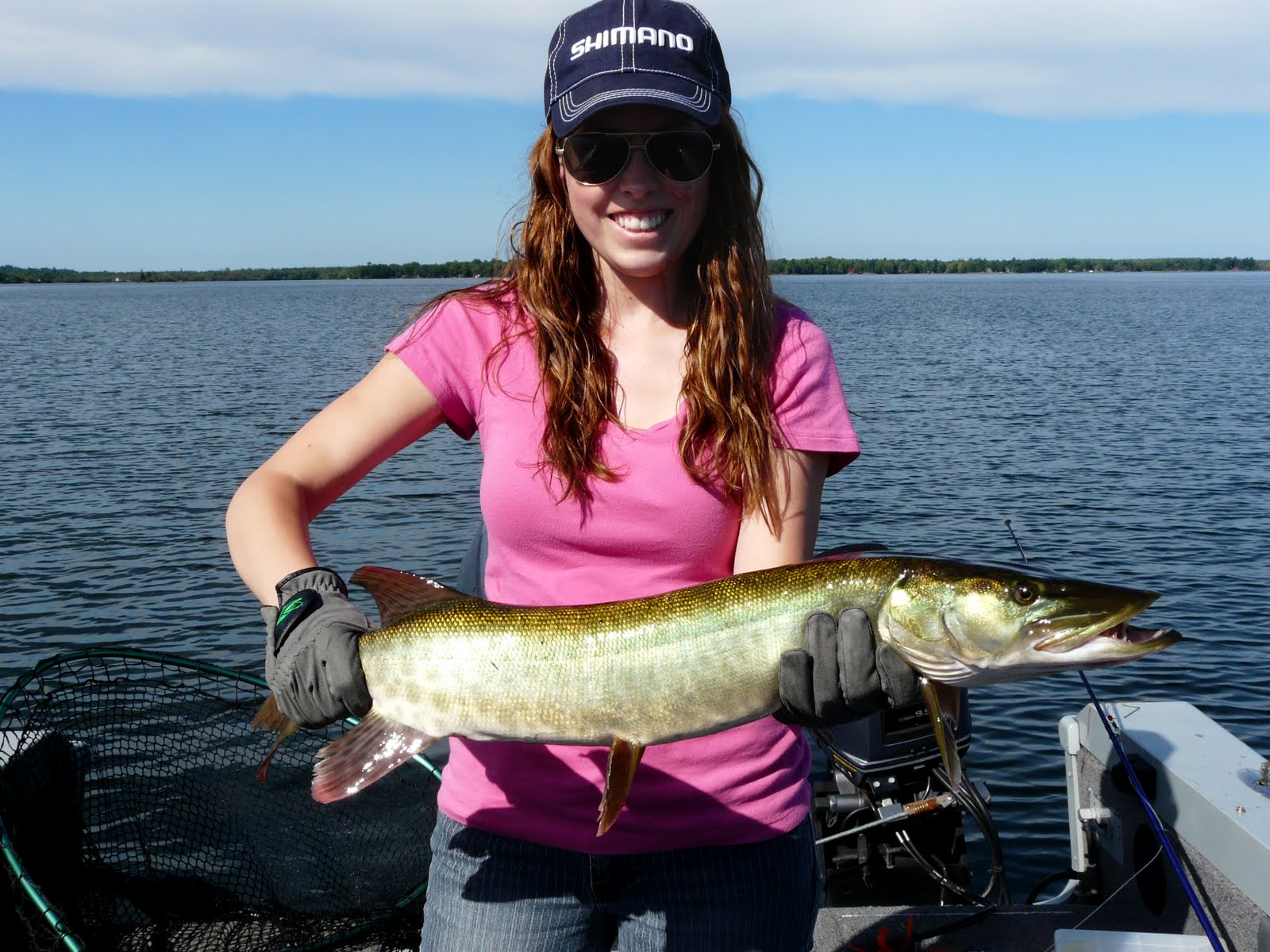 What gorgeous, yet terrifying fish! I will admit, as I was fishing I was nervous and excited at the same time. I knew I could potentially catch the biggest fish I’ve ever seen in person. It was a great feeling! No wonder there are so many musky lovers out there!
I was so happy at this point, and felt that my whole weekend had been made. We continued to fish hard, and spent the afternoon casting. I was throwing a double cowgirl and it felt like my arms were going to fall off, but I didn’t want to stop. Sometimes I just don’t know when to quit. As I was watching the blades spin about 20 feet from the boat, there was a flash and a BAM! Fish on! I may have shrieked and even jumped up and down a little, as I was so excited! I had a positive attitude about this fishing trip, yet I didn’t expect to catch a musky – let alone 2 musky! 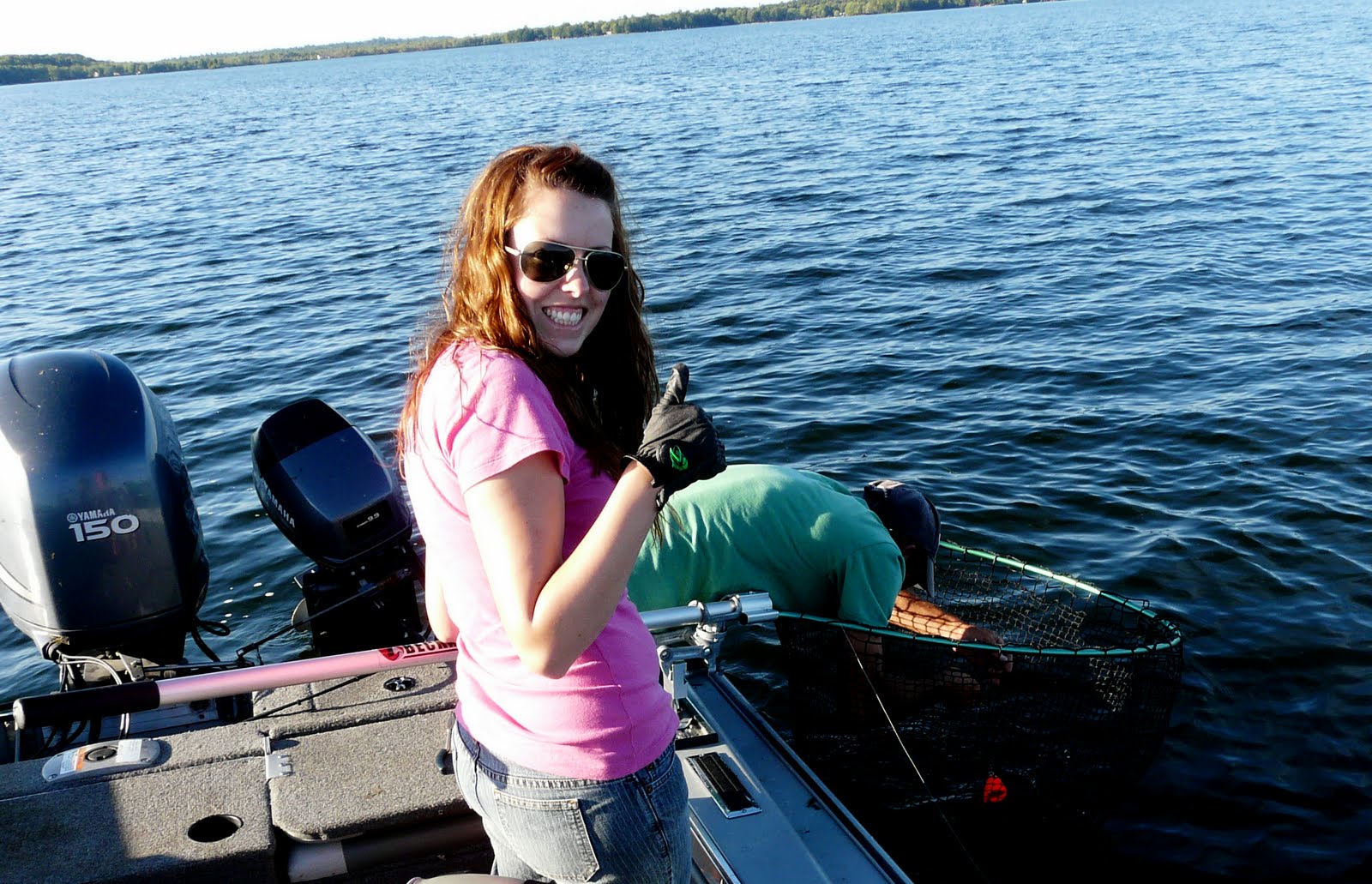 Greg is helping me unhook the beast! Musky get pretty frisky! 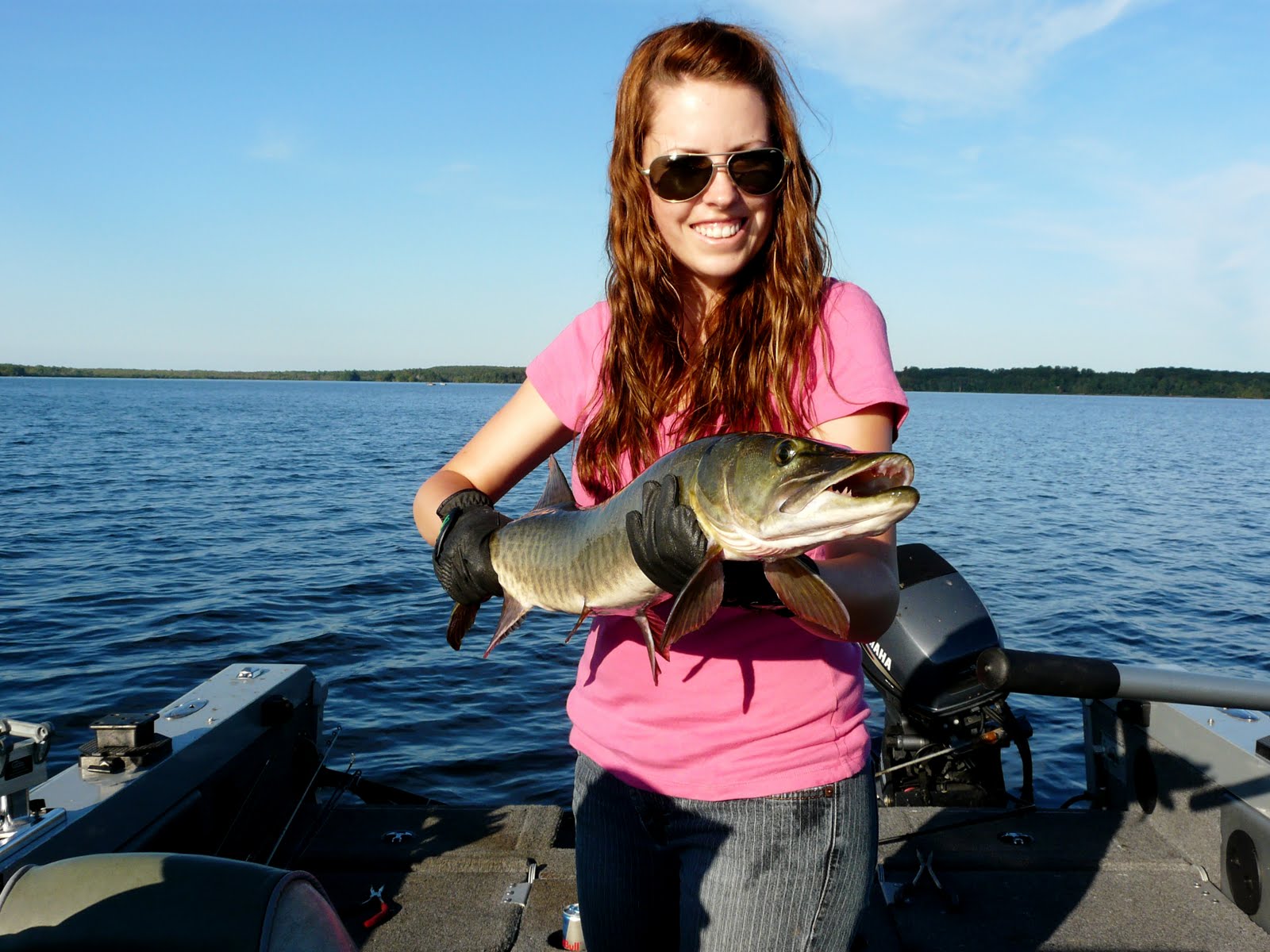 Musky #2 – we’re both smiling!
And this is a photo of the same fish, however it is now my favourite fishing photo! We are both so happy to meet each other! 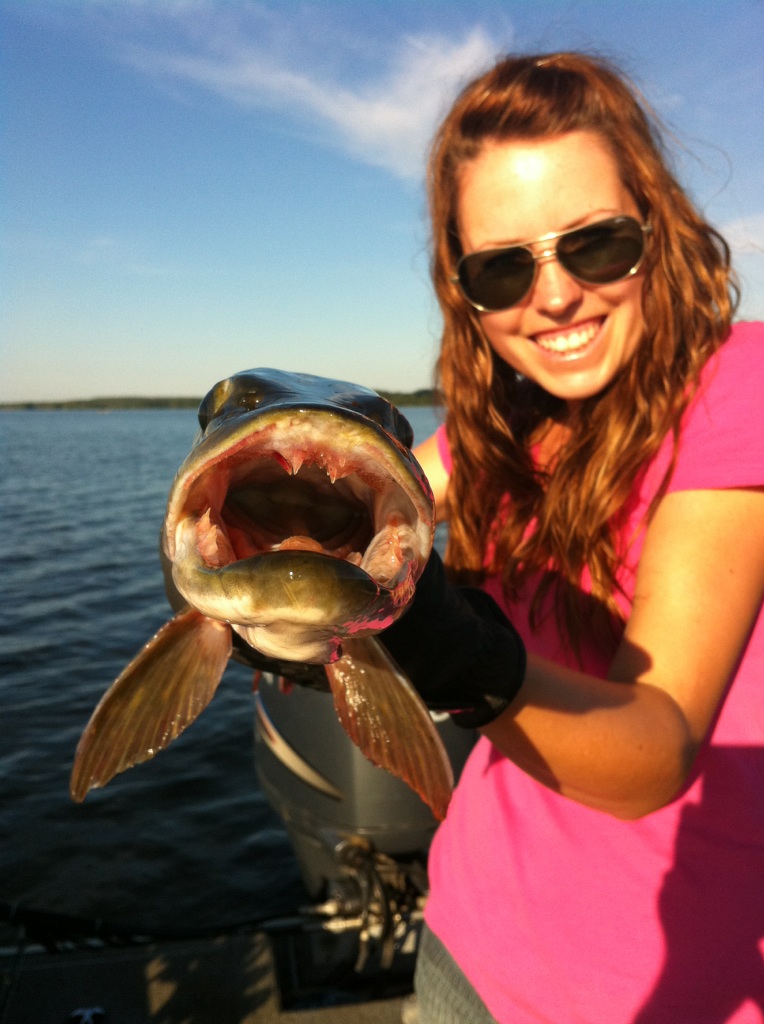 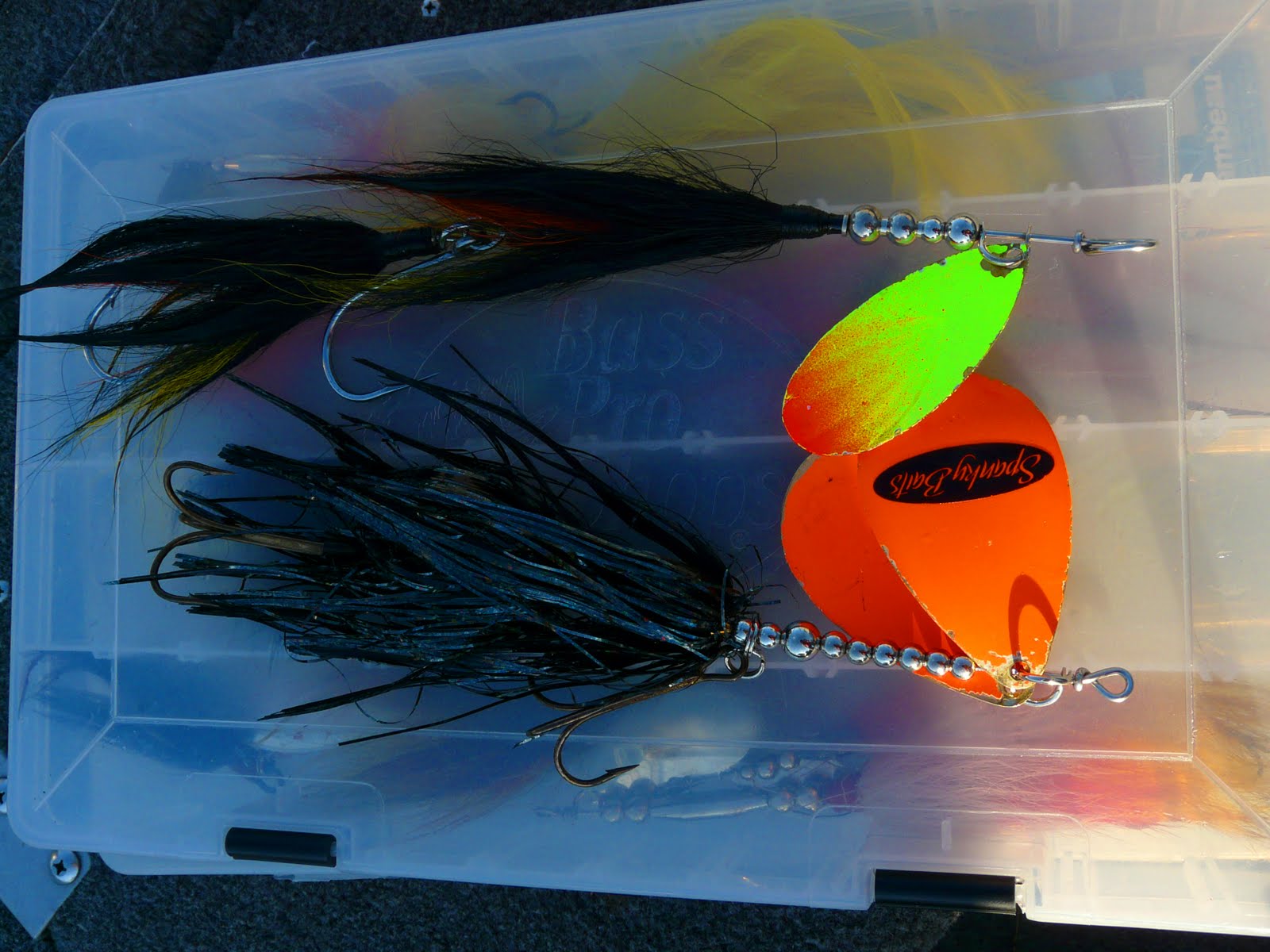 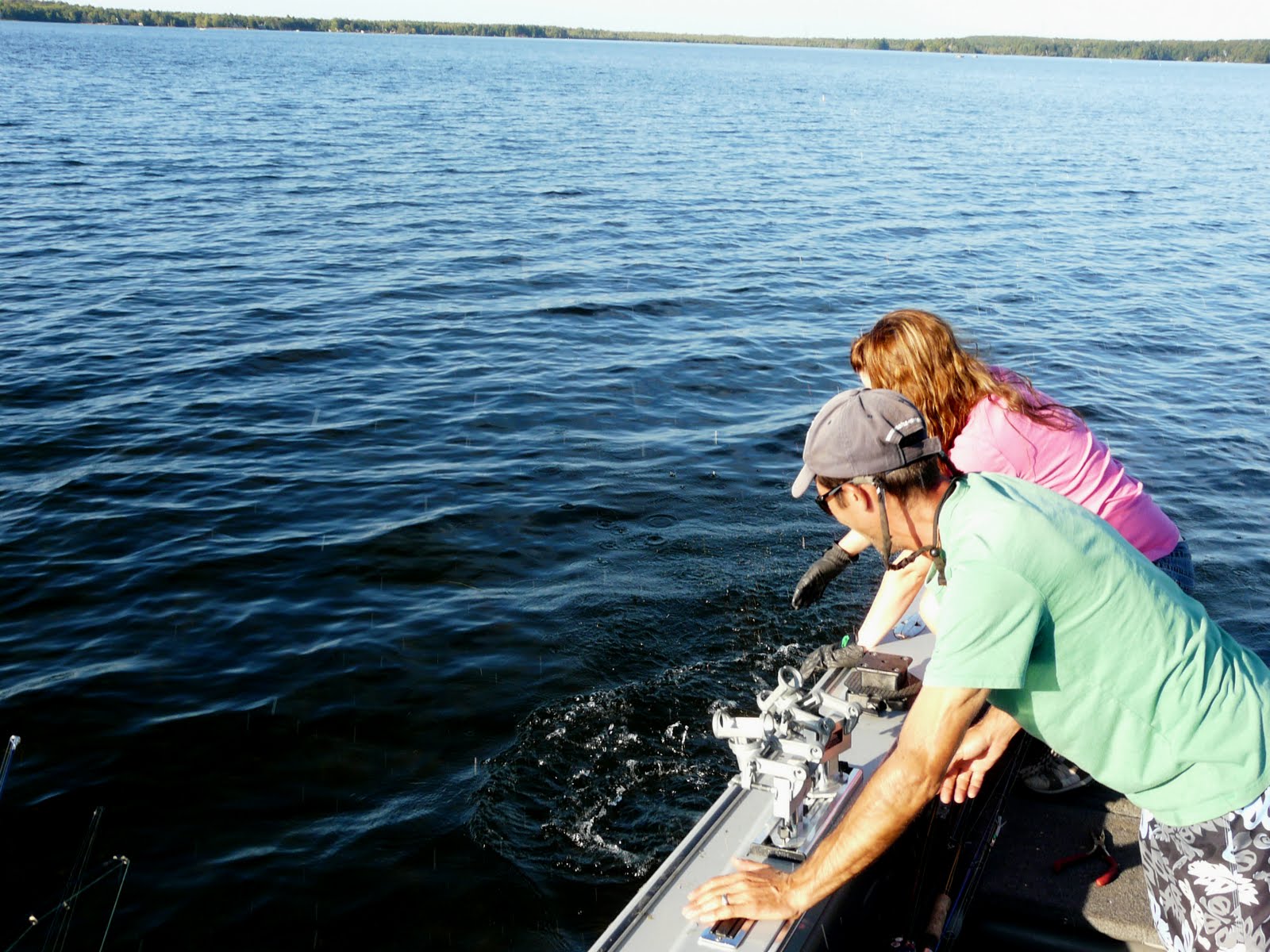 The release
Both fish were out of the water just long enough for photos, and released quickly back to their home. I tried to gently lower them into the water and let them gain strength to swim away, but as soon as they saw water they bolted and escaped! No way I could hold onto these strong fish for long!
Thank you so much Greg and Arnaldo for an amazing experience catching my first muskies! Can’t wait to go again!
Ashley