Skip to content
There’s not many fish I’m afraid of aside from musky. That was up until today when I landed my first ever gar! Don’t get me wrong – I am THRILLED! However, hooking and landing these toothy creatures is one heck of a challenge! But I knew what I was getting myself into… 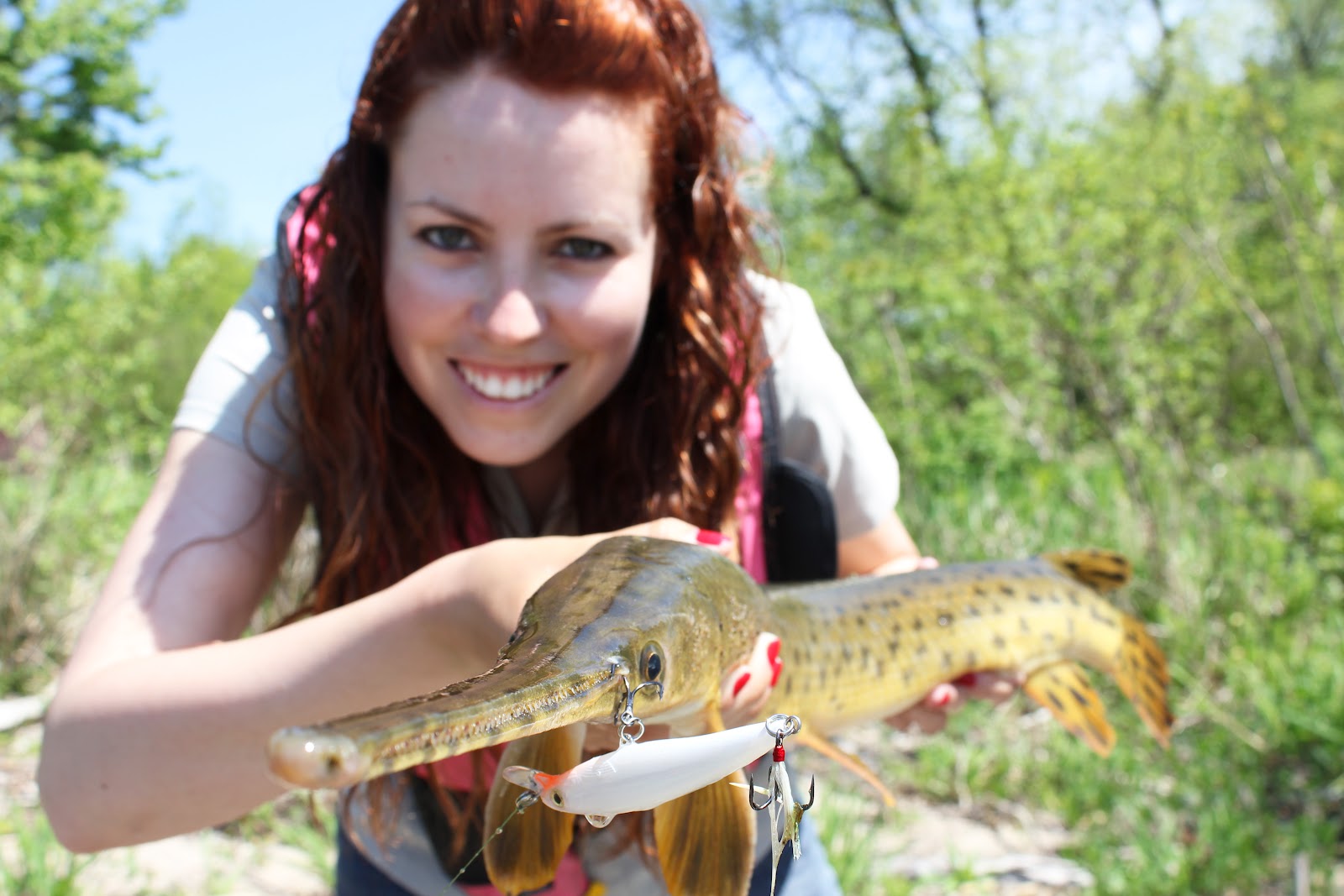 My first ever gar!
I have spent many hours in the last few days on some flats in the Bay of Quinte trying to spot gar from a distance that I could cast to without spooking them. The spots I’ve seen them were in about 1-3 feet of water on beautiful beach-like shores that go on forever. Normally these are NOT the places I fish, as I rarely see any typical game fish on spots like that, so it’s been overlooked so many times in the past. I barely knew anything at all about gar. I normally spend most of my time on the Bay searching for weed lines, and any sort of structure, and contour lines for other species and this outing went against all of that.
My friend Matt hooked and landed a gar on one of our last trips, and since then I have had a hard time giving up trying to get one myself. His advice was to spot them and cast behind them or around them, bringing the lure up beside them swimming the same direction they were or right in front of their face – and they would chase it down and strike. This was right on the money! The conditions this afternoon were perfect – sun high in a cloudless sky and a slight breeze which hid me from gar but calm enough for me to spot gar at a distance without too much chop on the water. Did I mention I was in my kayak? 🙂 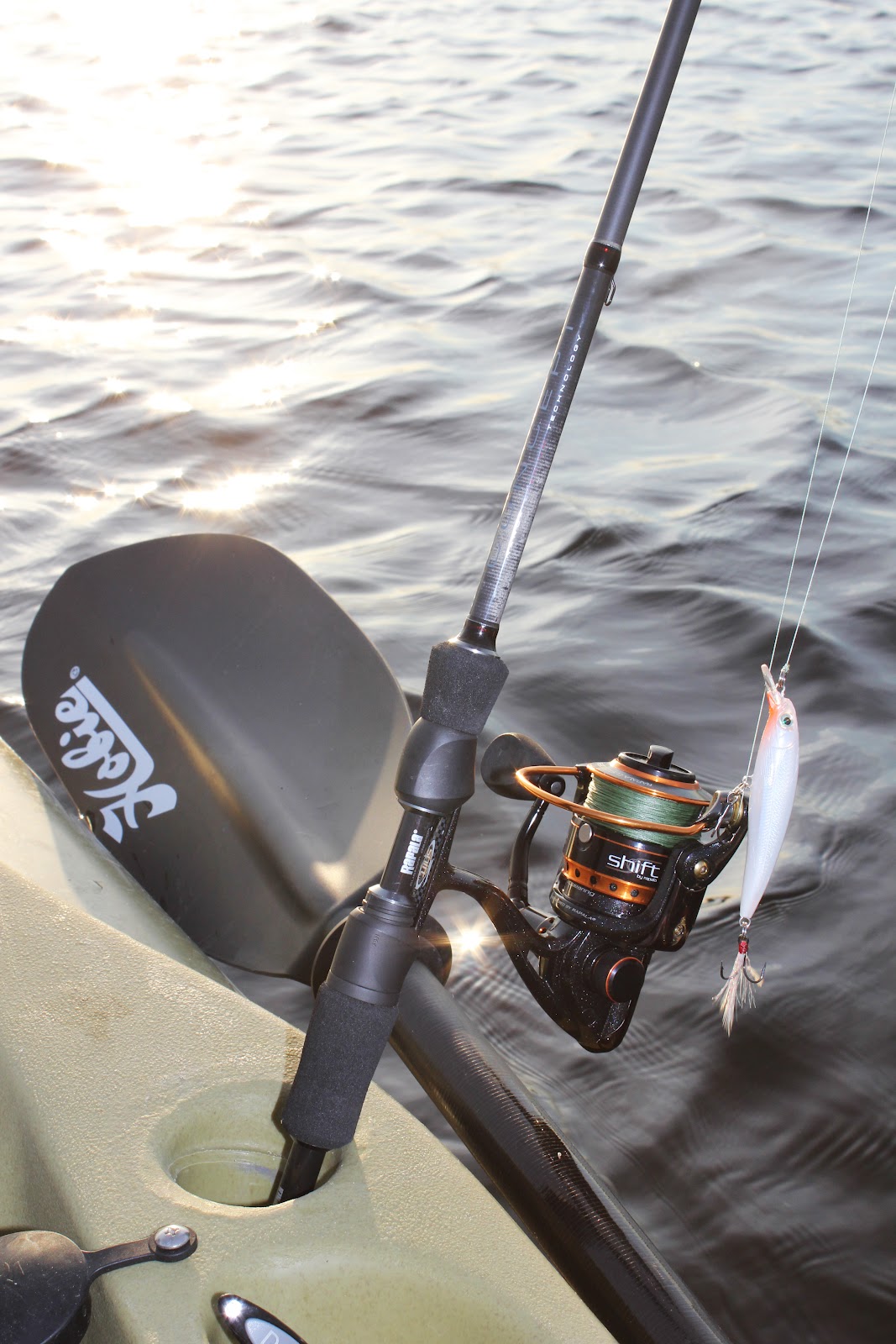 My weapon: a 6’3″ medium x-fast Concept rod, Shift reel, Suffix 832 30lb test, and an X Rap – oh, and a Hobie Outback 😉
I was fishing alone briefly until Matt arrived, and today was the first time I had any real action from the gar. In my first few casts I had some interest which was exciting enough for me. With the wind being down and the visibility being great, I could spot them before they saw me and get good casts in before I was noticed. I spotted one from quite far away, and followed Matt’s advice. I reeled slowly, and twitched, paused and reeled and repeated. The gar took a couple of chomps at my X Rap when it paused and then really chased it as I pulled it away and then it closed in on it!  My first gar!!! Matt was now on the water at this point, so we met up on shore to snap some photos. 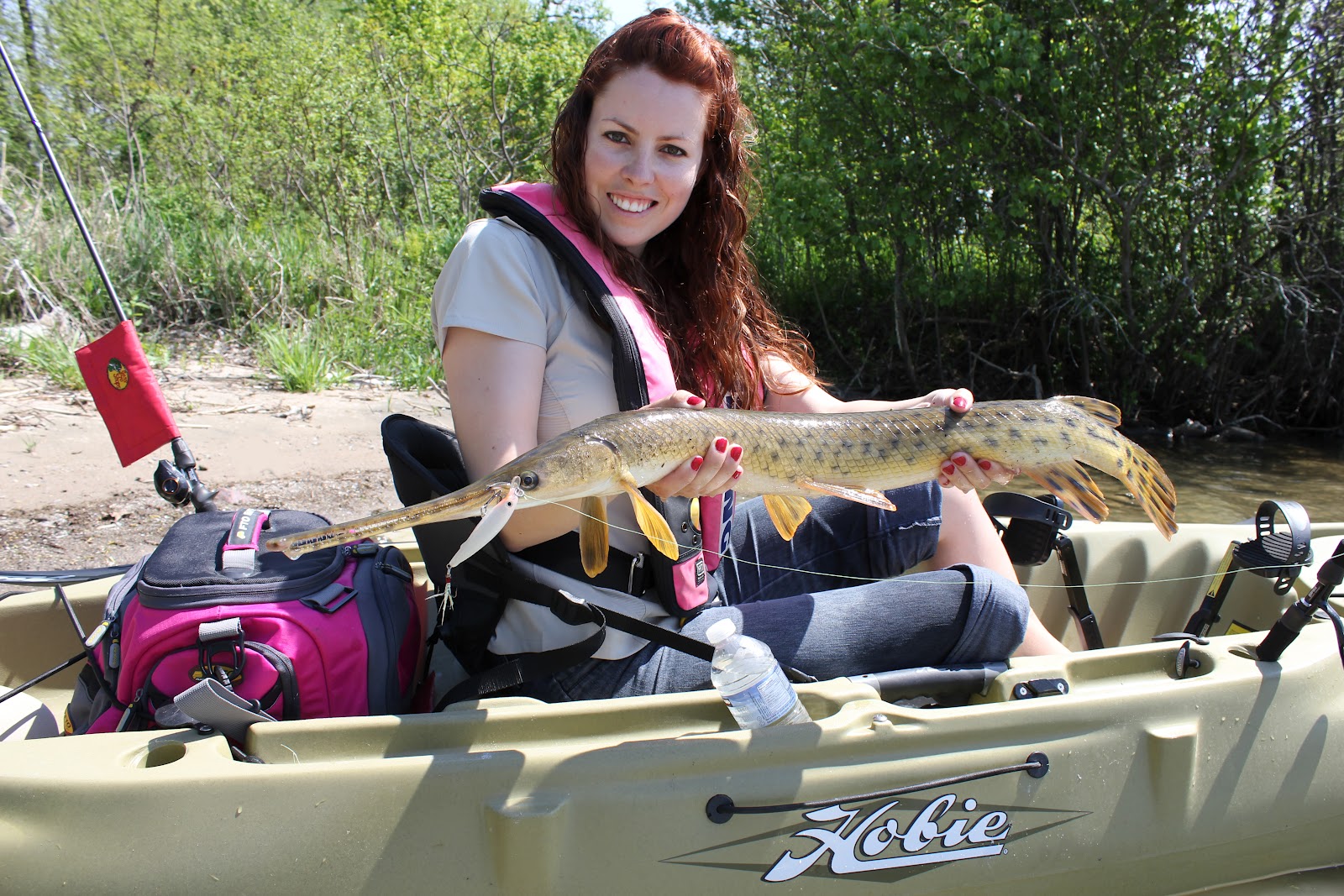 A proud moment catching a new species!
It’s such a rewarding feeling crossing another fish off the list, especially when you’ve spent hours on them and gone home wondering what you did wrong. Fish can really mess with your mind!

Matt caught a nice one and tied up the score! 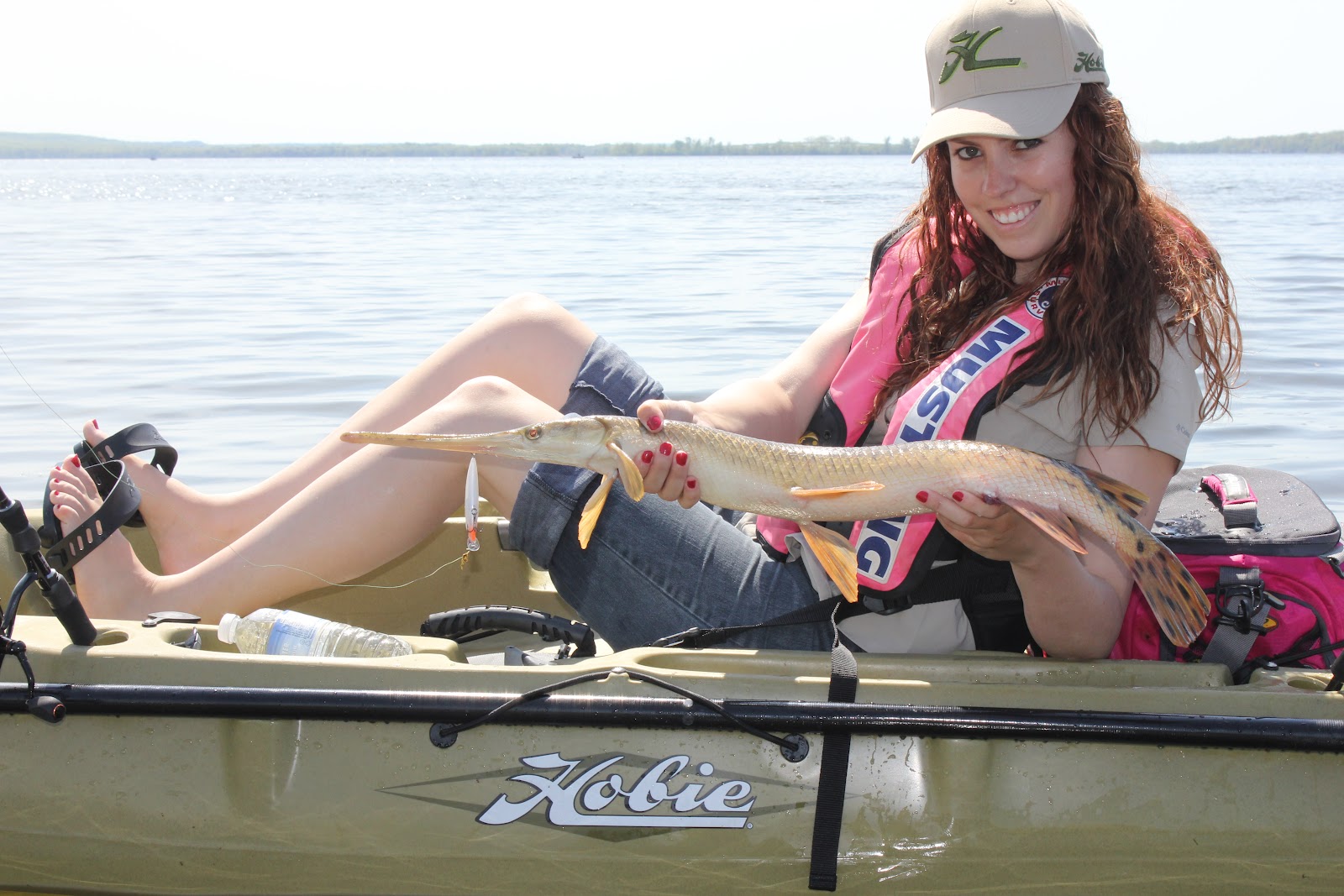 My second gar was a lot lighter in colour. 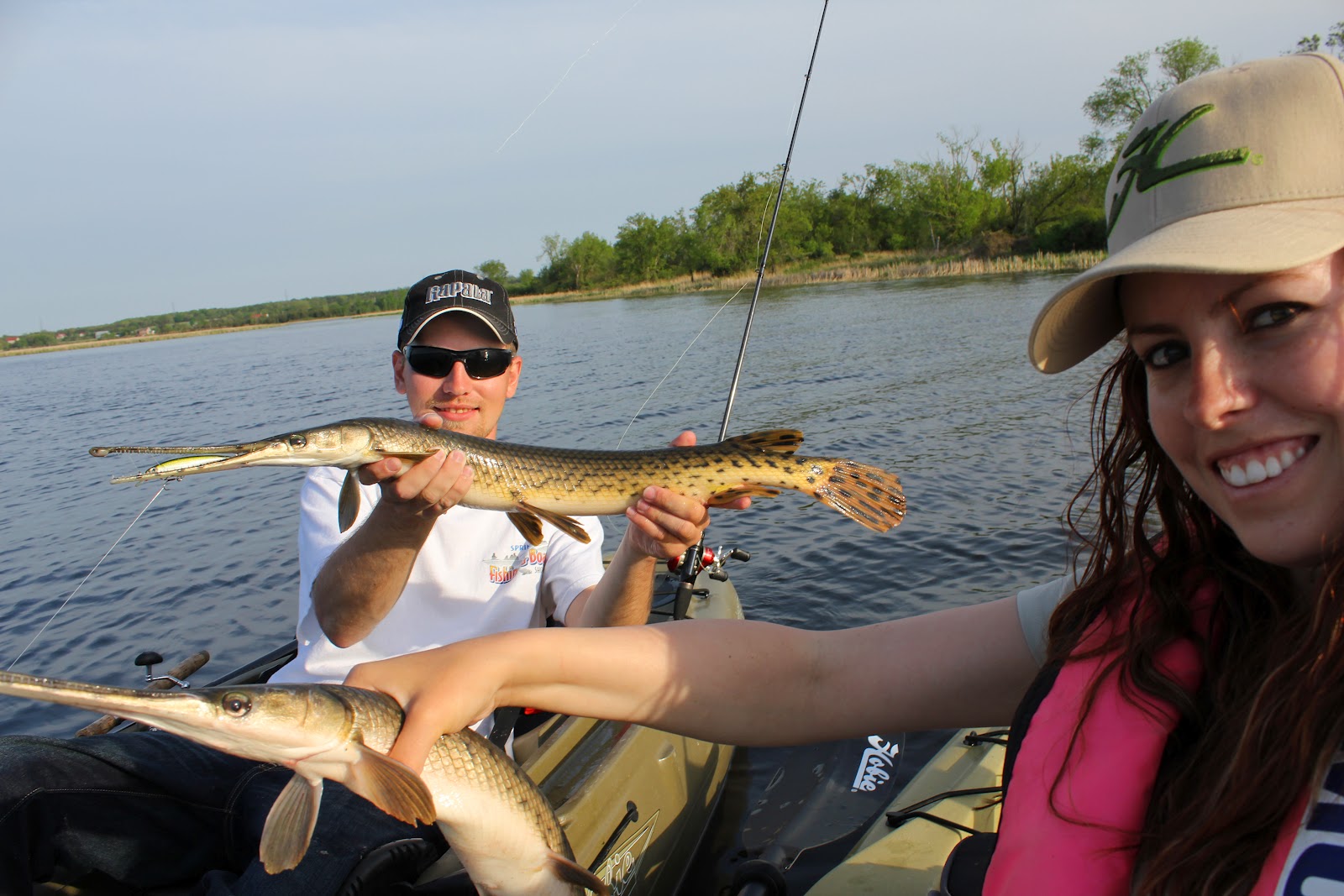 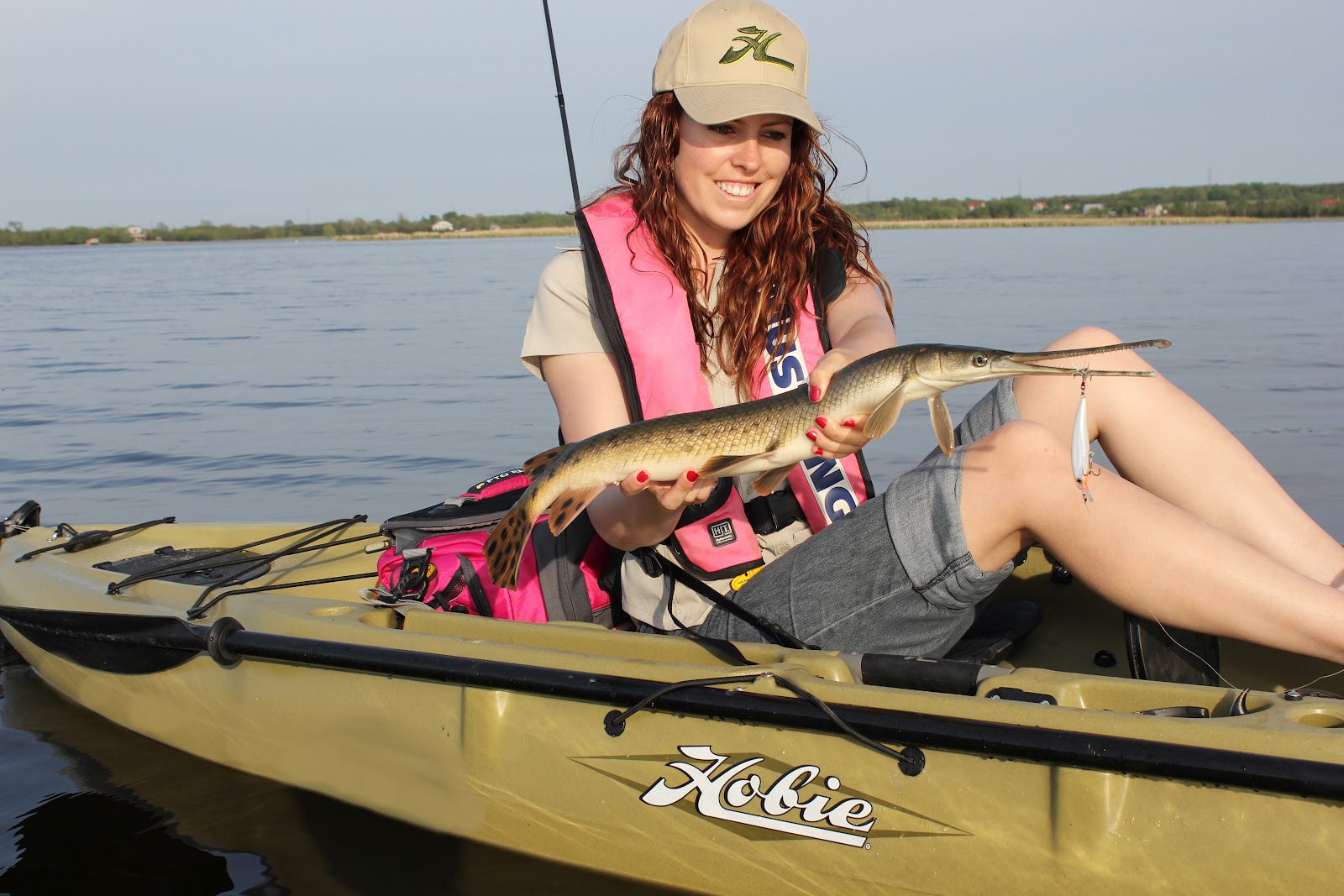 We ended up with 15 gar by the end of the day! We started off sight-fishing them, but then stumbled on a huge school that were surfacing and we didn’t want to spook by getting too close. We were casting in and around it and getting them to strike either in the school, or along side the kayaks! These fish were the most aggressive, and jumped out of the water when hooked and really put on a show. At one point I screamed a few times when the gar I was battling got right up to the kayak and thrashed around, and suddenly the boats in the area all moved in!! Haha. Yeah, I felt pretty girly at that moment, but like I said – these fish are scary and I wasn’t interested in getting stitches!
I can now say I am addicted to another species, is that really what I need? Heck yes 🙂
Thanks for reading!