Skip to content
Here in Ontario, musky (muskellunge) are undoubtedly one of the largest fish you can pursue. They are often referred to as ‘the fish of 10,000 casts’ as they are challenging to hook and to land, or ‘water wolf’ because they are an ambush predator and at the top of the food chain. They will inhale any type of prey that can fit into their mouth up to 30% of their own size! They are absolutely beautiful – yet extremely scary in my opinion! Being afraid of a fish I am pursuing doesn’t prevent me from doing it, it just gets my heart pumping a little faster and keeps me on my toes. Every move has to be calculated to ensure my own safety, and proper fish release.This weekend I shared the water with Jeffrey Fortuna who visited all the way from California! Jeffrey is part of Hobie Cat’s marketing department and was in the area on business, so we planned a couple days of fishing since he was nearby! He is a phenomenal photographer and after getting to know him – he was an absolute pleasure to spend a couple of days with! Jeffrey is responsible for most of the photos/videos you will see from Hobie. I’ve looked over their website many times dreaming of those types of experiences – big fish, new species, getting towed by them in a kayak and the awesome pictures to follow!

We arrived at ‘Lake X’ Saturday morning and set out in search of bass and walleye, and I brought my musky rod too, just in case. We were both fishing out of Hobie Mirage Outback kayaks. The bite was really light, meaning the fish weren’t hitting hard at all. We had a few smallies, rock bass and a largemouth landed as we moved onward and into a shallow bay. Jeffrey was a bit of a distance from me as I picked up my musky rod and started casting. I fan casted the area using my musky set-up: Rapala R-Type 8’6 fast action, extra heavy power musky rod, Andros reel, Sufix 832 65 pound braid, a 12 inch 150 pound test fluorocarbon leader, and the bait – a 9″ Storm Thunderbeast in chartreuse perch colour. About 4-5 casts in I saw it…… I was at the end of my retrieve and was right at the kayak pulling my bait out of the water to recast and saw the biggest musky I’ve laid eyes on following my bait from a few feet away. I pressed the button on the reel quickly and let enough line out and to work the bait out from under the kayak in the same direction. The fish didn’t spook at all, it actually paused, then swam right under the kayak after my swimbait and SMASHED IT right beneath me! I held on because I knew I was in for a ride! 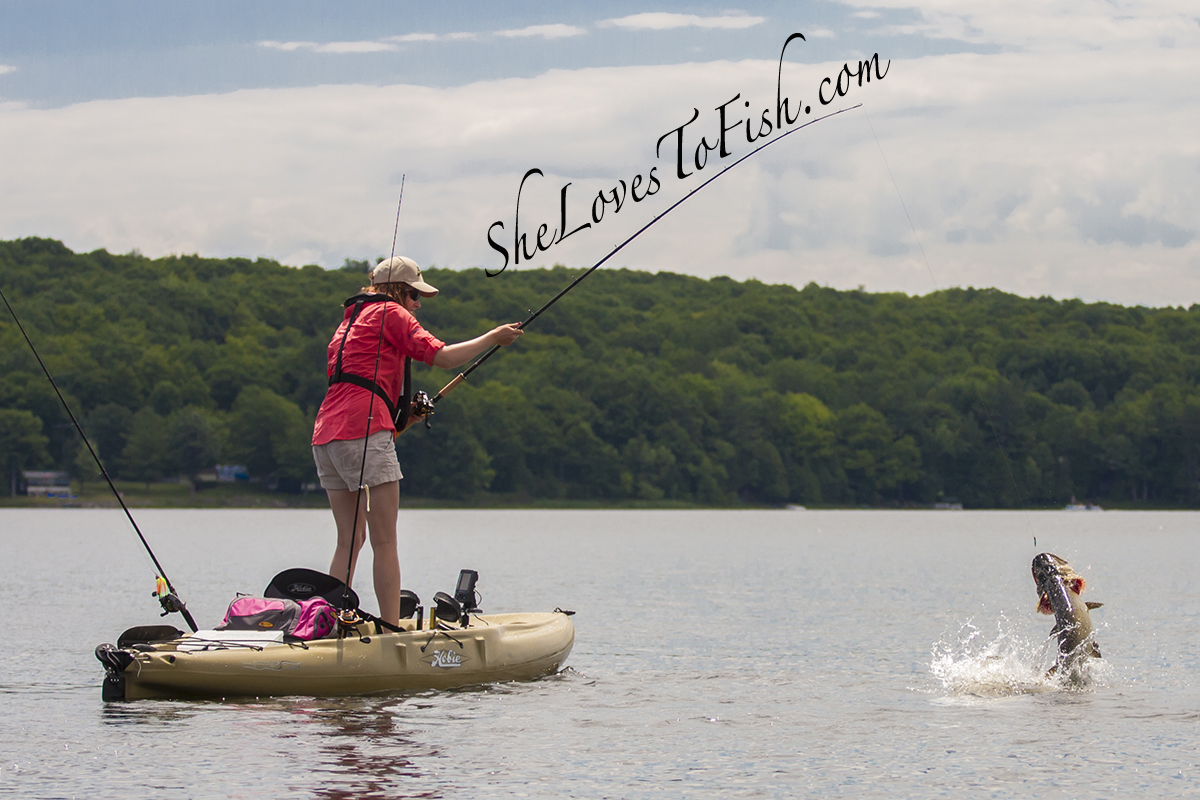 I couldn’t believe what was happening! The fish bolted and splashed and I screamed ‘This is the fish of my life!’ and Jeffrey immediatly peddled over and started snapping photos and video too!
My heart was pounding, my legs were shaking as I got towed around. The fish was jumping completely out of the water and for a second I thought about tarpon. You know you’re sick when you hook into a beast like this and think about bigger ones! The jumping and the head shakes just reminded me of what I’ve seen on WFN of tarpon. I got the musky near the kayak and grabbed my Lock ‘n Lip, gripped the bottom lip, and removed the hooks carefully as Jeffrey captured the whole experience. 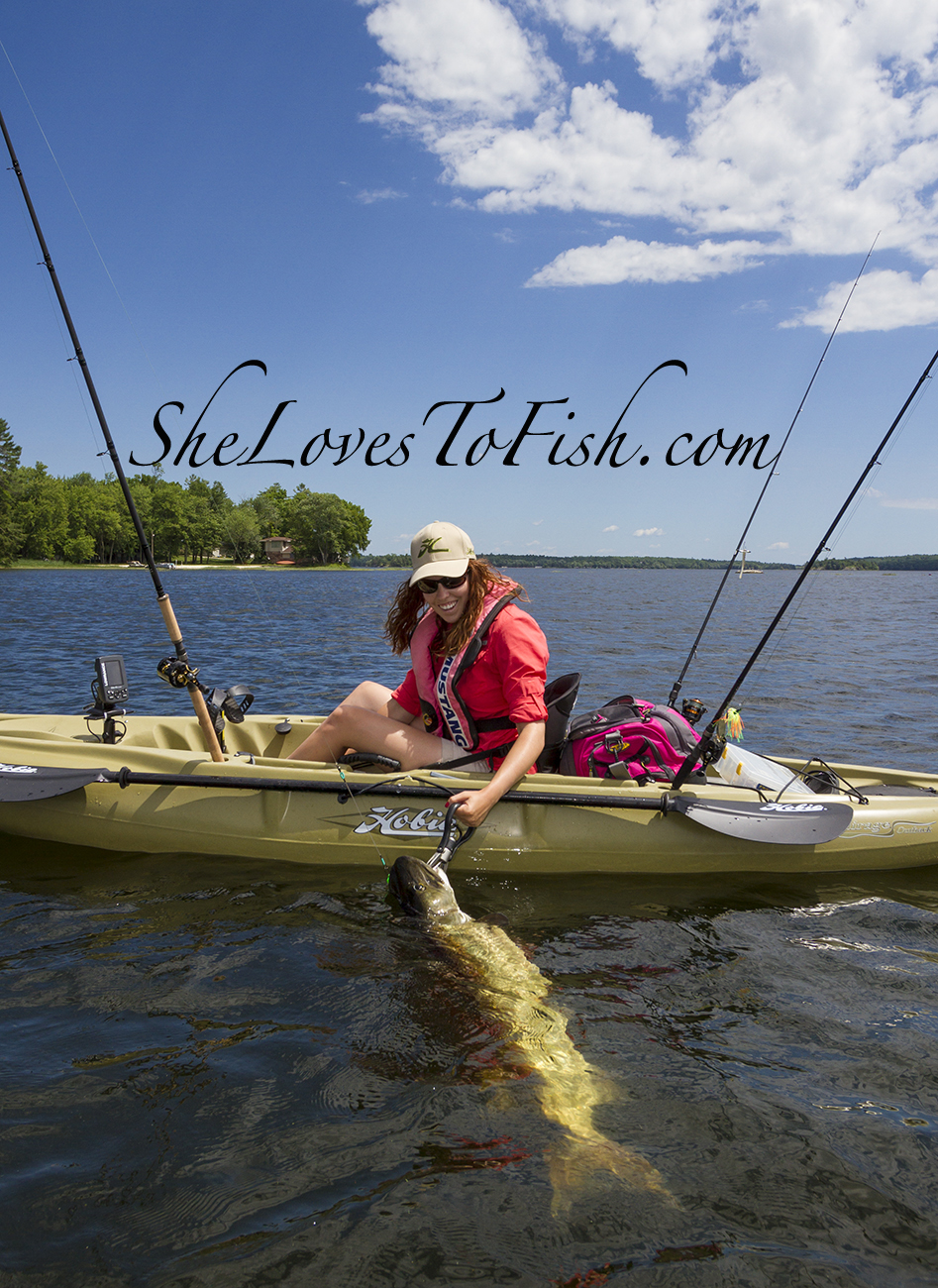 My first kayak musky – 40+ inches!
At first I had doubts that I could land and unhook the fish on my own. The key was having good control over the fish with proper gear, and stability in the right kayak for the job. I remained calm and careful and ….I DID IT!!!! I landed my first kayak musky at over 40 inches long! Another experience off the list… but I have a feeling I won’t be putting this idea down for awhile. The thought of bigger musky is way too enticing 🙂
Thank you to Jeffrey for incredible photos that deserve to be framed, including my new website header. Thank you all for reading! 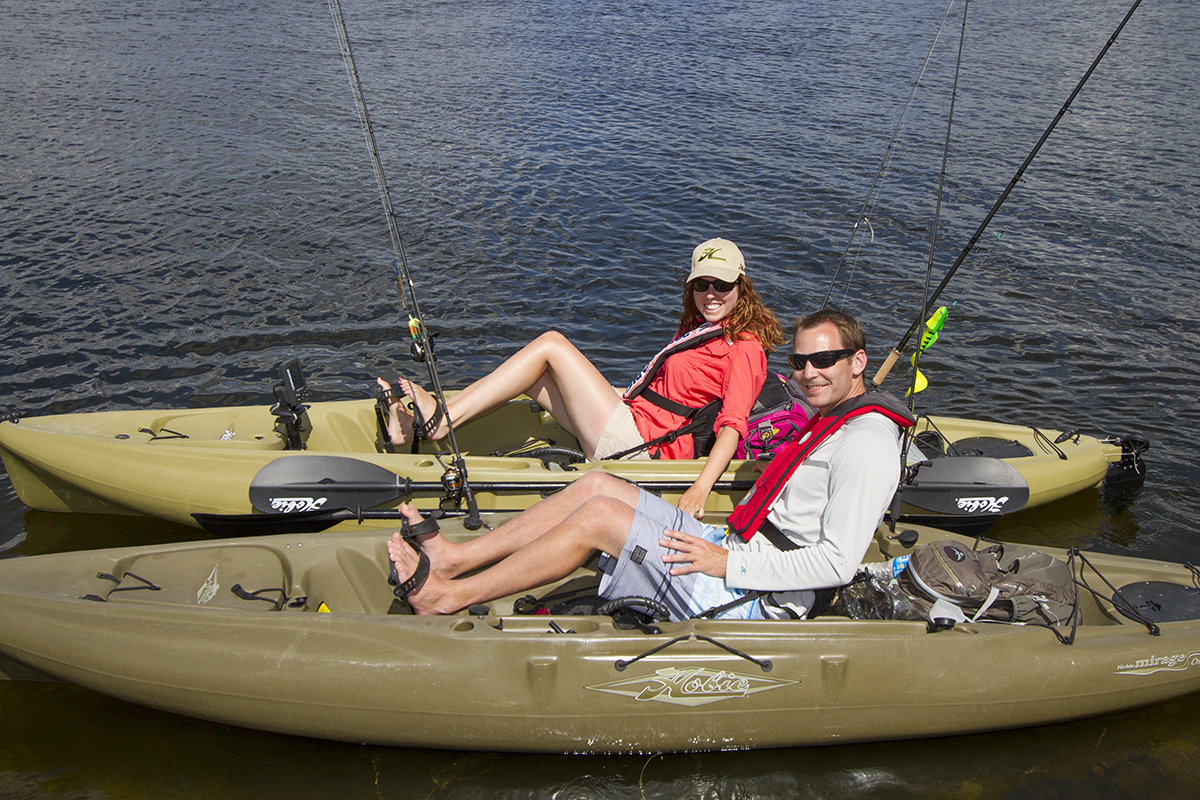 The video is now live! Thank you so much Jeffrey for putting my experience together into this video. Hopefully more to come 🙂