First of all….. CHECK THIS OUT! My BEST personal salmon, a Lake Ontario tributary chinook!
This isn’t one of those stories where I will talk about the fishing being ‘on fire’. Don’t get me wrong, I am absolutely THRILLED – but it was a tough day and I had to earn the giant featured above!
I was out of town today with my usual fishing partner Matt, and on our way home we decided to stop at some of the tributaries to see if the salmon were in. The first pool we visited was loaded… but we didn’t have our fly rods or any of the salmon gear I’d normally use. We made a quick trip to Canadian Tire to pick up floats, roe bags & split shots for the spinning gear we had in the car, and headed back to the pool. We fished late afternoon into evening with a few hook-ups but no landed fish. It’s so hard to consider calling it a day when you’re gazing at giants swimming literally feet away…. taunting you, and I really wanted Matt to get his first chinook! We kept on… 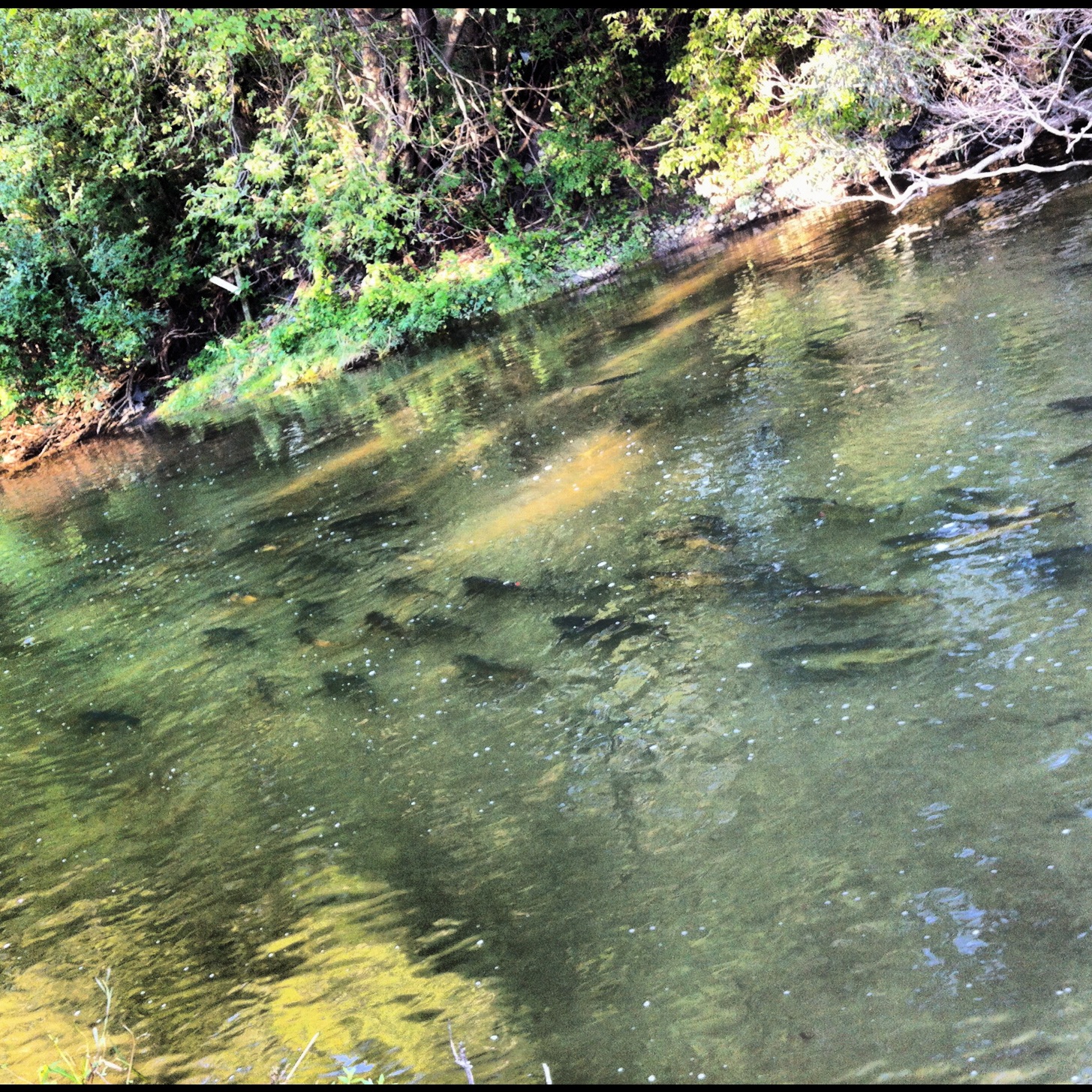 The view….
We only bought one jar of roe and ran out after awhile. As darkness fell, Matt decided to tie on an X-Rap and I thought he was crazy! For me it made sense to throw a hardbody bait in open water or deeper water for staging salmon, but I had never considered it in a pool. He depended solely on feel as he reeled, then twitched only moving about 2 inches of line at once. He kept it literally just below the surface, above the fish and not through them or below. Fish were bumping it as they stirred and rose, and as it got darker, they seemed to get more aggressive. At a slow retrieve and with the sensitivity of the braided line (20lb Sufix 832), he was able to feel everything that was going on. We heard baitfish jumping and he thought that the vibration and the faint flash of the lure in the nearby street lights may trigger some action. Within a few minutes he had a hit, his drag screamed as the fish bolted and splashed and Matt’s first ever chinook was ON!!! No way!! He took his time since it was now dark and the mighty salmon did about a 10 minute dance before joining us on shore for a photo op! 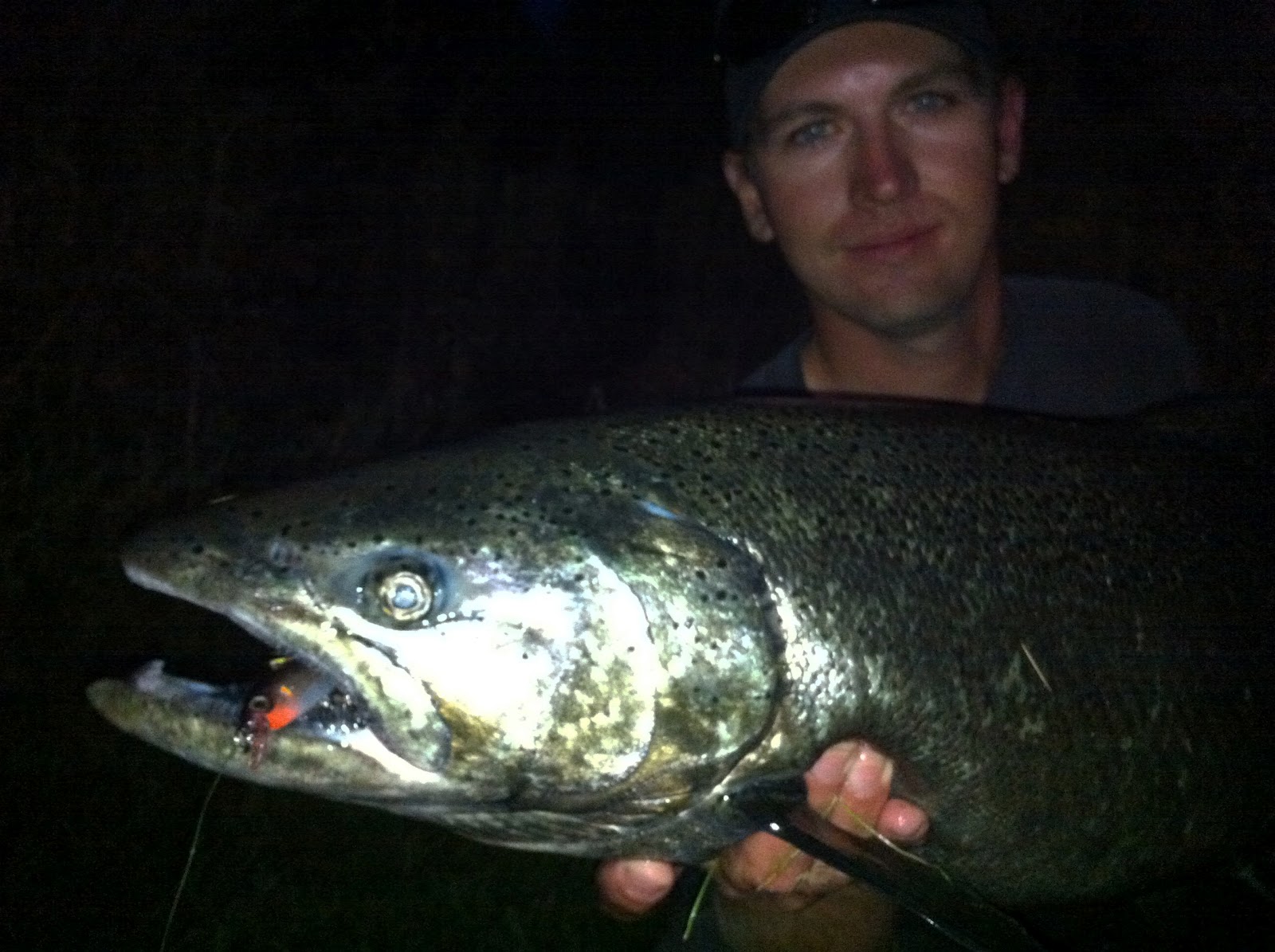 Way to go Matt! A 34 incher!
I was so happy for him! Nothing like seeing someone catch their first of a species, and he figured something out completely new to me! Awesome! I naturally had to try next. There was just one X-Rap in the small box he brought, so he handed me the rod. I did the exact same technique…. twitch, reel 2 inches, twitch, reel 2 inches really slowly and repeat. I haven’t done a lot of night fishing, so it was really cool to be so tuned into the action of the X-Rap and the feel of the line. My fish didn’t come so easily but after a little while I hooked into …. a monster! This fish went ballistic initially and then just put up a steady fight which seemed to go on forever! My heart was pumping and it was so freaky not being able to see what I was dealing with. Normally I watch a fish turn or jump and am a step ahead on rod handling.. but not in the dark! My drag was backed way off and I just followed the fish where it wanted to go and kept tension while pulling it backwards downstream as much as I could. Around 20 minutes later the fish gave up and we pulled the beast to shore…. snapped some photos and celebrated a mission accomplished for both of us!! The nearby lights went out shortly after, and it was time to call it a night.
What a rush!!!! I get really excited about sharing my photos with you guys and I thought this one would be best celebrated with a CONTEST!! This is my personal best salmon, and may actually be my personal best fish but I didn’t have a scale with me. 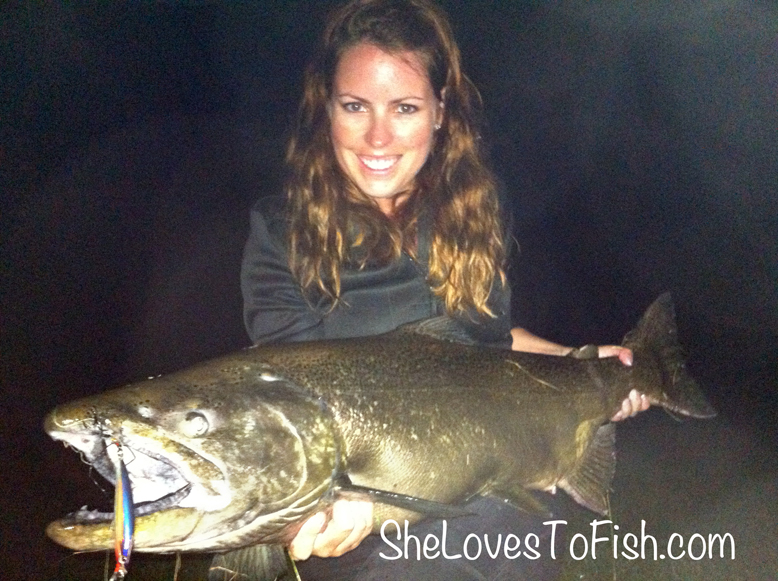 TO ENTER:
Leave a comment here on my blog with your name and your guess at the fish length (in inches). (Your comment may take a little while to appear, don’t worry if you don’t see it right away.)
The first 6 people to correctly guess, or the first 6 that are closest will all win the same X-Rap used on our fish… brand new ones of course 🙂
Be sure to check back here for the winner on Sunday, September 23!! You can subscribe to my blog (there’s a box on the right side bar) or just remember to come back and see if you guessed correctly 🙂
Thanks for reading and good luck!!