With ice seriously lacking in many parts of the province (of Ontario) this winter, it was a little more challenging to hit the ice as hard as I usually do. Typically my favourite hard water experiences take place when exploring big bodies of water in search of big fish. With such a late first ice and the constant unpredictable temperatures this year, it really just gave me good reason to stick to smaller bodies of water that had safe ice and focus on some species that don’t usually get a ton of my attention. With all the warm weather recently, I think it may even be safe to say this could be my last ice fishing update! I figured it was a good time to recap some highlights from this years ice season and talk about some of the species I focused on.

Pumpkinseeds! I think these fish are one of the prettiest and most colourful around when it comes to freshwater. I’ve grown to love these scrappy little guys more and more over the past few years as I’ve been spending more time targeting them both on the ice and on open water.

My favourite presentations this season for pumpkinseeds and bluegills have included 1/64th ounce Tungsten jig heads with tiny soft plastics like the Trigger X Mustache Worm or Wax Tail. I typically go with white, red, or chartreuse for the soft plastics depending on the water clarity (brighter colours for stained waters). When the panfish are loaded up on my flasher and hitting anything I drop down, I up-size to a spoon to weed out the little guys. I have done well this year on a 1/16th ounce VMC Flash Champ.

On one particular lake that I frequent in the winter, there always seems to be incidental northern pike caught but none are very big. It’s fun every now and then when the panfish all vanish and a big red mark comes cruising in on my flasher and hits a spoon.

During one panfish trip this winter while using a tiny 1/64th ounce Tungsten jig, I had a bigger bite that was no typical pike for this lake. I backed off my drag as I had only 3-pound test line and was barely able to move this fish at all. It was burying itself down into the weeds and with some slow coaxing and pleading for my line not to break, I somehow was able to bring this fish up over time and eventually land it (all while filming live on Periscope)! Talk about pressure! 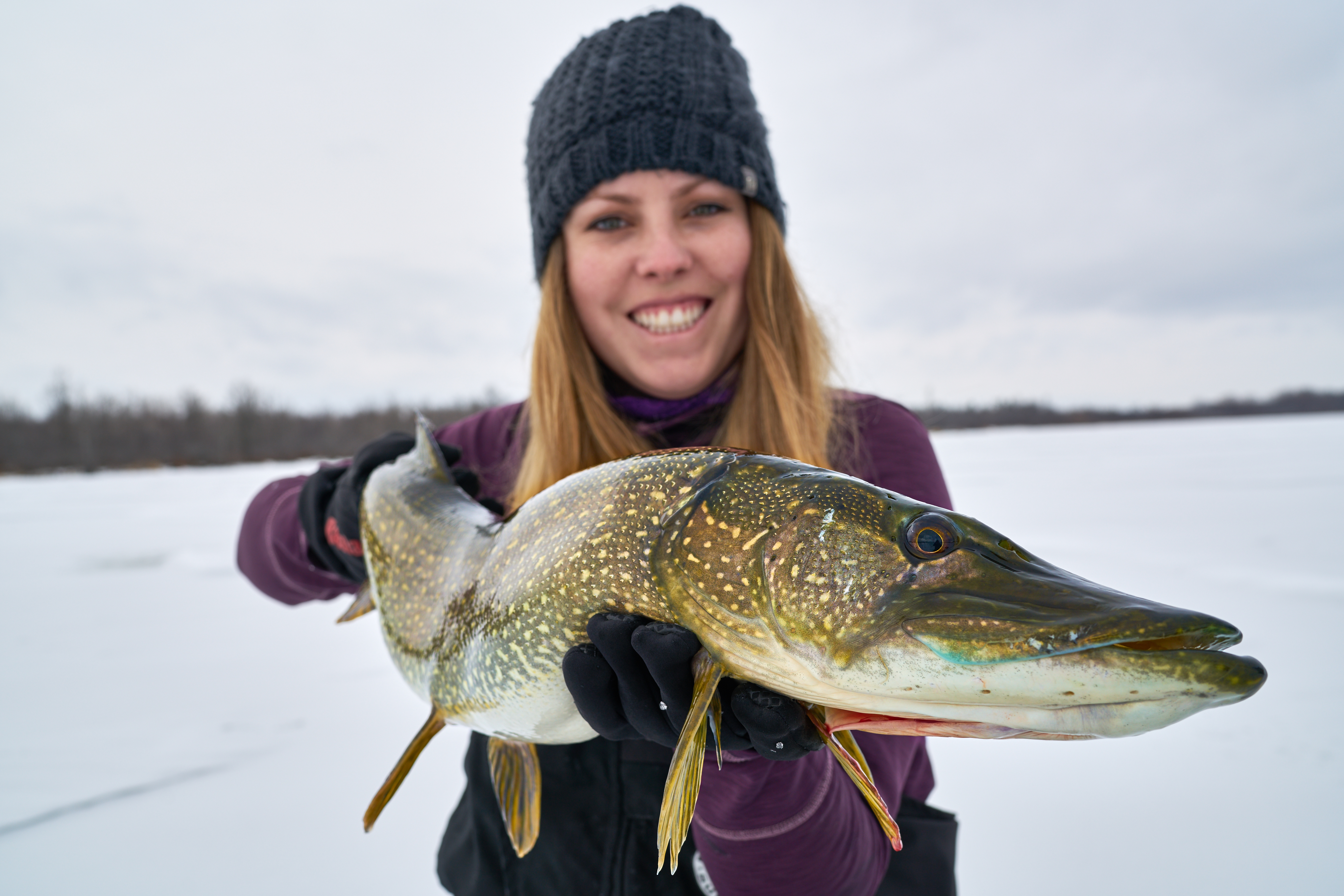 It was certainly a catch that took me by surprise and the largest pike I had seen on this lake! What was also unique was the blueish-green lip markings as well. This fish was certainly one of the highlights of this winter. It was released too.

Another memorable experience this season was a day on the ice targeting lake trout with Eric, our friend Mike Bredlaw, and of course Blitz. If I don’t post enough photos of my pup, people start asking how he is 🙂 We were using blade baits, tubes, flukes and fishing a big area in between 40 and 120 feet of water. There was a ton of bait in the area and not far behind were hungry lakers!

Lakers are one of my favourites through the ice. They put up an insane fight! I keep telling myself I need to spend more time on lake trout during the winter. They can be super aggressive and can get pretty big, even on some of the smaller lakes. Next year, when ice conditions are better (fingers crossed), I am hoping to venture to some bigger waters in search of huge lakers. Lake Simcoe and Lake Temagami lake trout are both on my bucket list!

Eric was the star on this day bringing in two big lakers that were likely in the 10-pound range!! Such beautiful fish!!

Although it was a short season, I can’t complain because it was still a ton of fun with a good variety of species and some great memories! Dare I say this ice season could be in the books?! To be honest, I’d be OK with that! This warm weather has given me open water fever and I can’t wait to get back out in my boat!

As always, thank you for stopping by! For more frequent updates, connect with me on my social media pages below.