There are moments where blogs seem to write themselves in my mind while an experience is taking place. The sun shines a little brighter, the cool water swirls around my wading boots.. ducks taking off just downstream and flying feet overhead. It sounds to be straight from a book, but no – it’s fly fishing. This weekend was truly one of those times, and as I am writing this I am smiling while reliving it all over again.

Usually my blogs start off as a story and I save the best photo for last… but this time I am going to lay it on you right away.
CHECK OUT THIS FISH: 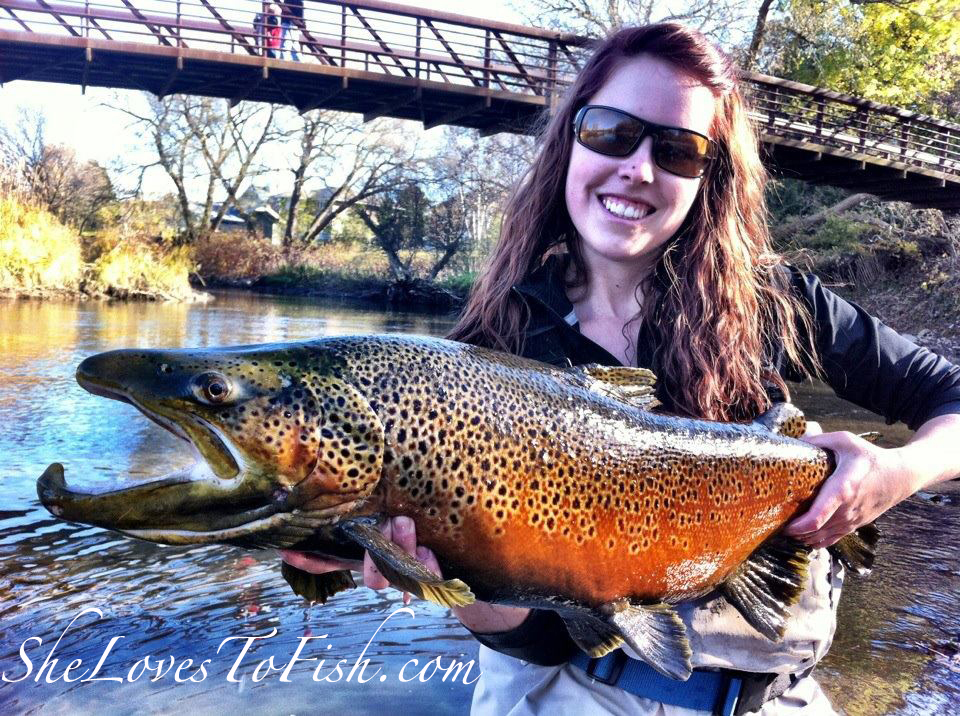 Brown trout are officially the most beautiful fish I’ve seen here in Canada. This one was spotted during a steelhead mission on a Lake Ontario tributary with my fly fishing partner, Mikey Fitzgerald. We made quite a trek down stream towards the big lake and began fishing when we spotted a couple trout.

Mikey:
“The area we found the two brown trout holding is what I would classify as a classic holding location. It was a deeply cut pool with wood on the steepest bank very close to an undercut bank. Migratory brown trout are literally suckers for areas like these. Two or three fish will stack up under the wood, and spawn at night at the tailout. We struck out with finding a spot like that.”

I stood on a high bank and casted down to the log that the trout were holding under. I was out of sight for the fish, and Mikey stood back enough to see what was going on. I could see my fly, but he had a better view of the fish. They were down low and tucked under a small log sticking out from the bank. The log was at the edge so the current swirled by the log, which was a perfect path for a “Pink Crystal Meth” fly. The fly caught the current and drifted right in their face. A few practice casts and tips from Mikey to get in the right spot and I was set. Now cast… cast… cast… and FLASH, SPLASH, FISH ON!

“Ashley, that is a HUGE brown!”

His words made me panic.. in a good way. Never had I been hooked into a brown trout! The battle lasted a few minutes and then the fish freed itself. A good story always has some heartbreak. I was really let down… but somehow I felt it wasn’t over yet. The fish moved into the stream and held beside another brown facing upstream. Mikey suggested letting the fish rest before trying for it again, and trying a different fly. 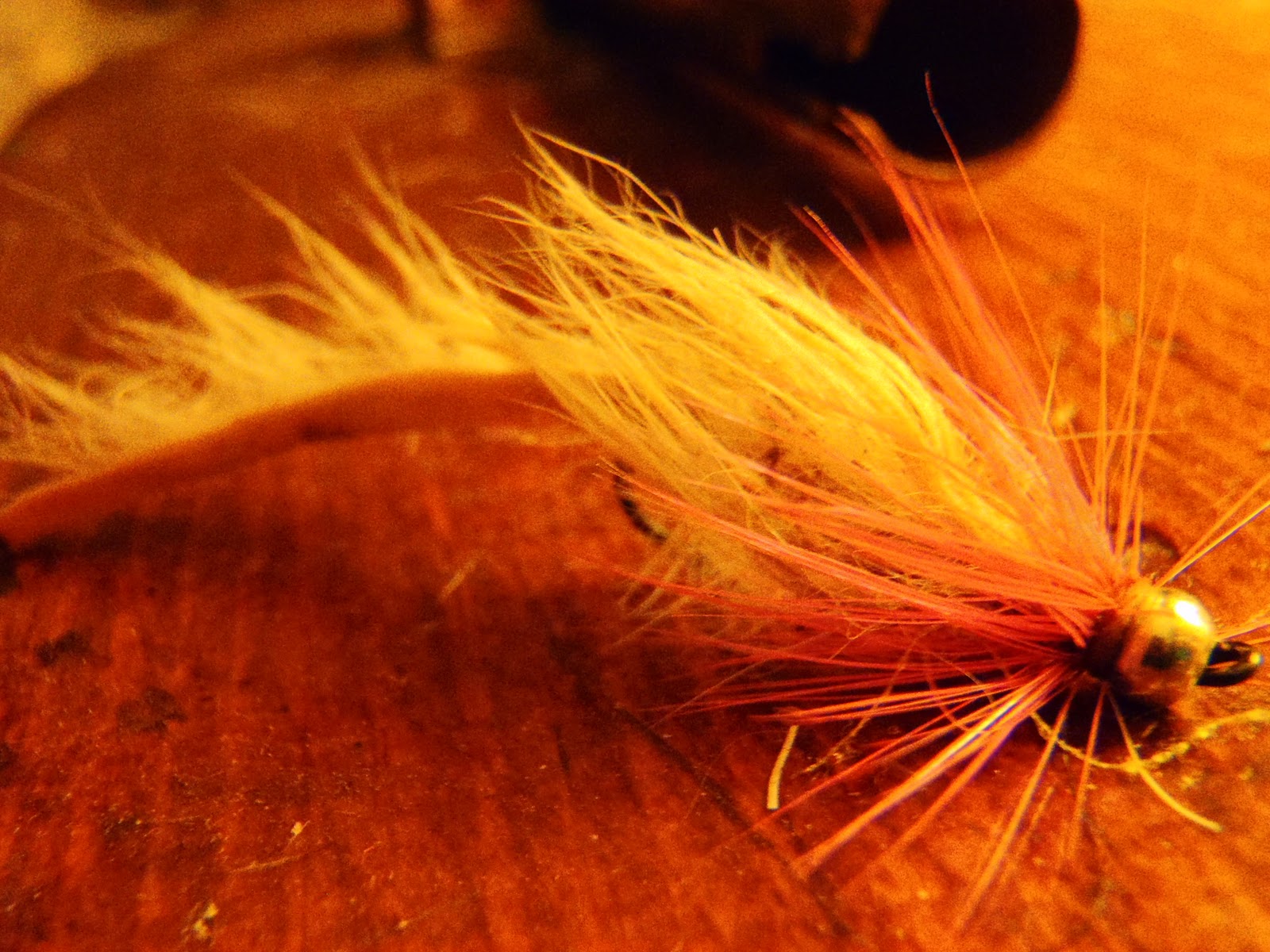 The next item on the menu – a “Fresh Fly”.
This fly was larger and imitates rotting salmon skin… tasty eh? The smaller brown went at the fly first but missed and then after a few more casts…it happened. That big brown inhaled it… and the real battle began! I immediately backed off my drag and jumped in the stream and made my way across to a larger flatter area where it would be easier to land the fish if I had that opportunity.
“The fish generally tried to keep itself buried in the submerged logs, really bulldogging it and staying on bottom. It made a couple of really desperate runs to the back of the pool then back up to the head of the pool. What they love to do is try to wrap around anything they can find first thing and that’s exactly what it was looking to do. If Ashley’s flyrod had of been one weight lighter, she might have been in trouble, but she wrestled him really well.”
(I use a 7 weight G Loomis Eastfork with a Venture reel, by the way). As you will notice in the pictures, there is a walking bridge in the background. As I was fighting the fish, a small group of people that were walking the trail stopped to watch. I noticed a couple at first but I became so focused on landing the fish that I couldn’t hear anything except the fish splashing, the line peeling out and Mikey talking me through it. When the fish finally gave up the group of about 6-8 people were cheering and clapping. I asked if one of them could come down and take our picture. (Thanks hiker-man!) We didn’t have a scale on us, or a tape measure, but I am all about catch-photo-release anyway. It was THIS big! 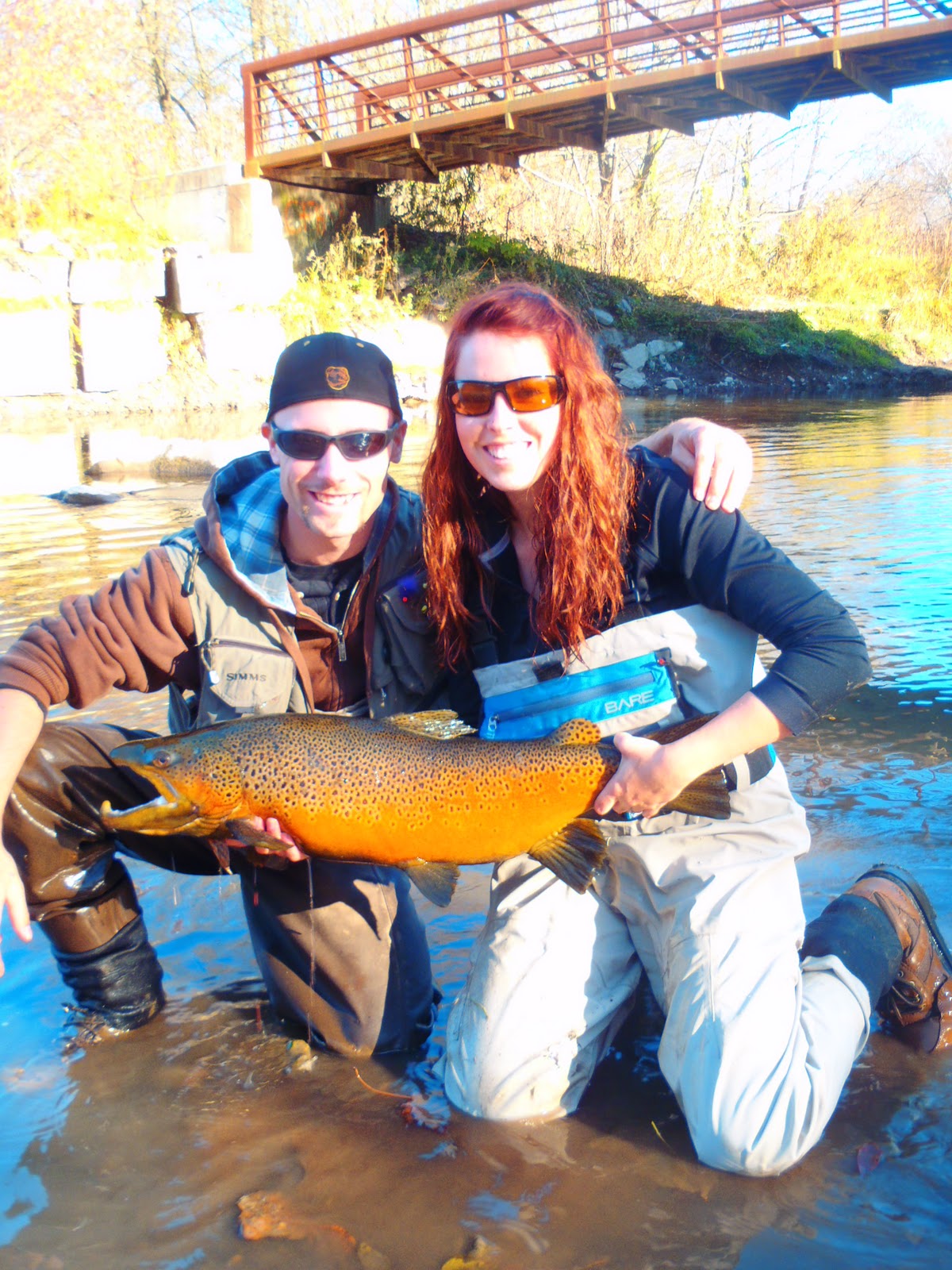 Mikey, myself and the most beautiful fish I’ve had the chance to meet. 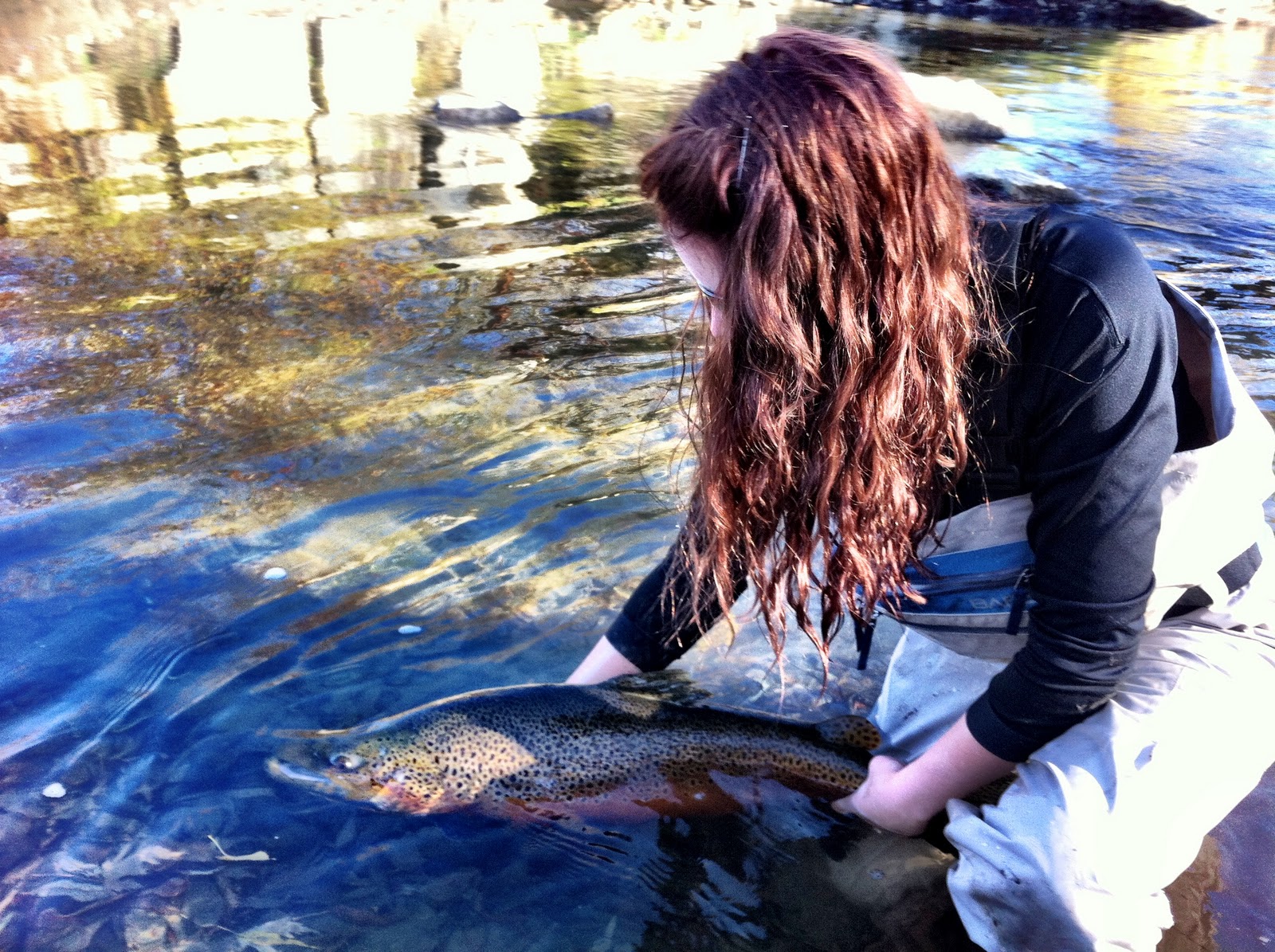 After a few photos on my iPhone and Mikey’s camera, the fish was back in the water to be released.
After this incredible moment, we climbed back up on the bank and just sat there to take the whole experience in. The trout layed low in the stream for awhile, and finally took off which felt really good to see. We stuck around for a bit and Mikey landed the other brown! After that we made our way upstream and searched for steelhead. I definitely smiled the rest of the day.. even after hooking steelhead and losing them!!!! The mission for my first steelhead continues… but the adventure has been worth it so far. Hopefully next time. Thanks Mikey!