Skip to content
If you’ve read any of my recent blogs, or follow along on Facebook or Twitter, then you may know just how badly I’ve wanted to catch a steelhead! In fact, there is no other fish that I’ve wanted to land as much. I’ve been learning how to fly fish over the past couple of years, and in the past 2 months I have been spending some of my weekends chasing after steelhead in several Lake Ontario tributaries. These fish are truly amazing and difficult to catch on the fly! It’s a love/hate relationship. 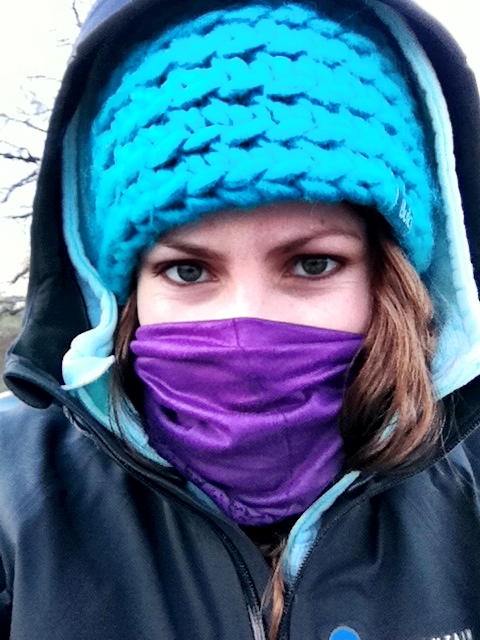 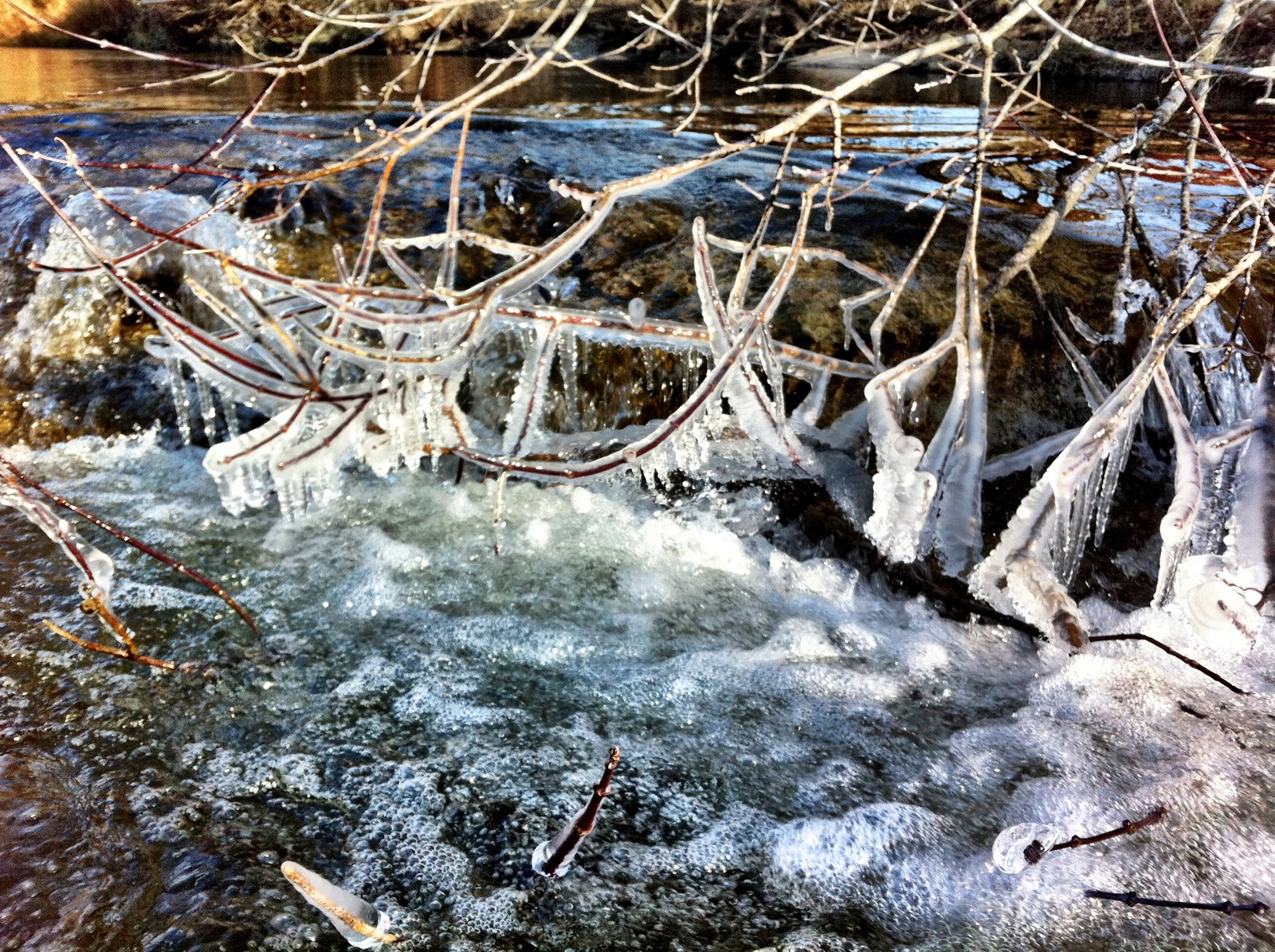 I was happy to see ice!

This past Sunday all the elements were against me; the thermometer read -4°C, winds were strong, and the water was chocolatey. The usual pools were barely visible. I saw shadows but couldn’t be sure that they were fish. All in all, it was pretty hard to even cast with my guides freezing up and wind messing with my roll casts, but I woke up at 4:15am, drove a fair distance and wasn’t ready to call it a day. With a little exploration, my friend and I found a clear, shallow pool holding fish and thankfully the sun was shining enough to reveal that they were steelhead. I really felt that “today was the day”. To be honest, it’s my usual attitude but something was different about this day. I felt mentally prepared for battle this time. I’ve hooked several steelhead, but landing them hadn’t been successful for me. They go ballistic as soon as I set the hook, and in my previous blog post, I had the longest battle yet but still ended up losing a monster. I’ve talked to a couple of friends about how to handle landing one and really considered everything going into this day.

As soon as I set the hook and really had a fish ON… I was totally zoned in. Immediate jumping and thrashing… I was literally in the worst spot to try and land this guy. Trees over head.. and all around to get tangled in, an easy escape route downstream and a fairly wide creek which made it hard to stay behind the fish. My main focus was keeping my rod tip high to absorb head shakes and thrashing… and keeping tension on the fish, yet letting it peel as much line as it needed to on 4 pound test to tire itself out. When I could see the fish slowing down, I pulled it back, and side to side to tire it out even more.


I fought this fish like my life depended on it, until landing it… landing a steelhead!
“ASHLEY! You did it!”
Another line I will never forget, by my friend Mikey. I am so glad he was there. He’s taught me so much about fly fishing and I wanted him to be there for my first steelhead. I have never felt such a mutual happiness over one fish. 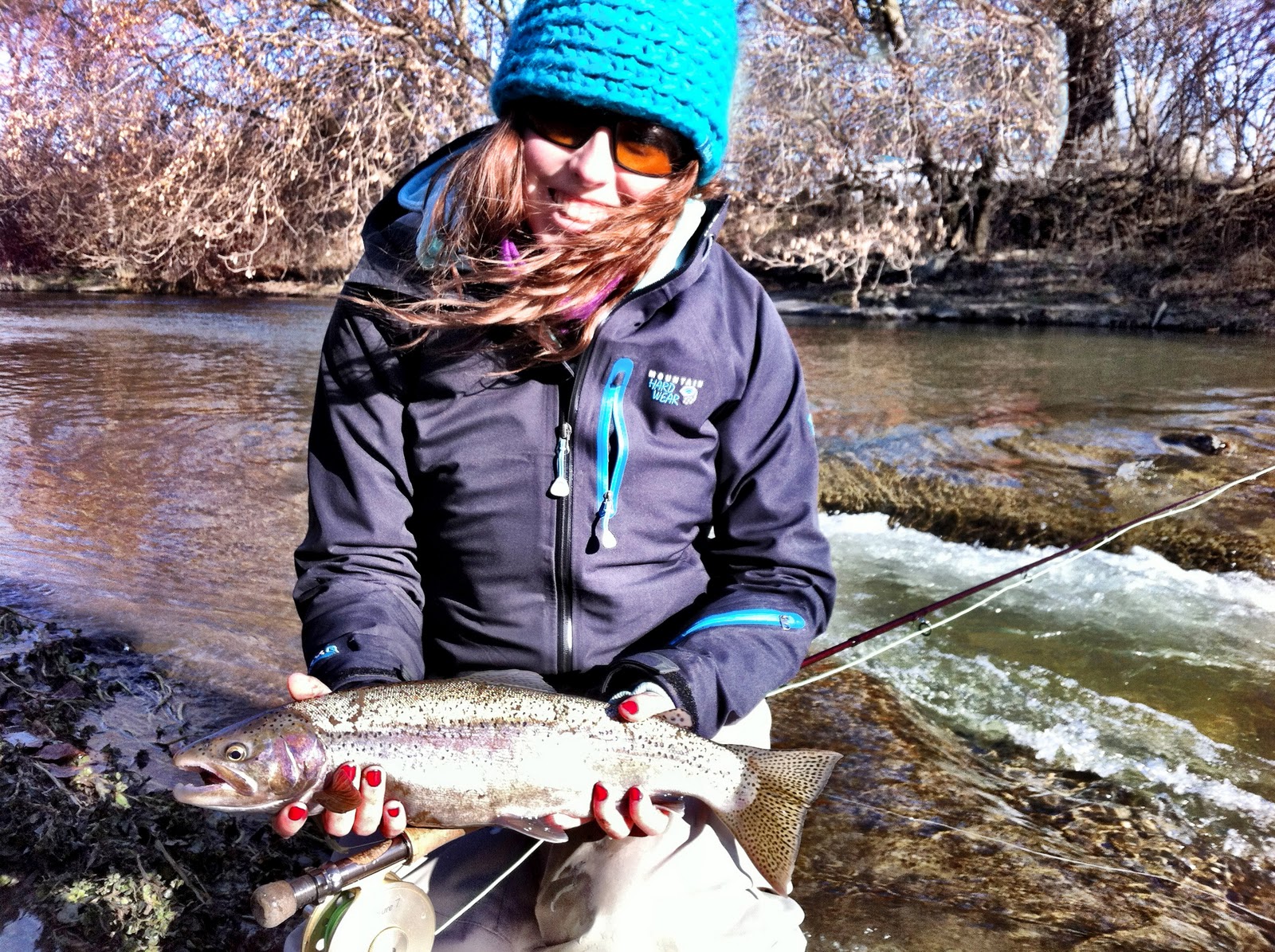 My first steelhead
My hands were so cold that they turned nearly as red as my nail polish after releasing this fish, but I was so happy that I didn’t care. I got my gloves back on and warmed them up, then took the gloves off to start fishing again. At this point we each had a steelhead landed.﻿ Could things get any better? I’m sure most people would be very satisfied… but I saw bigger fish in this pool and really didn’t think it was over just yet. I am sure that sounds a little greedy… or maybe it’s just what happens after you land a steelhead, but I wanted another one.
I began the day throwing egg patterns, but switched to a nymph after Mikey had landed his first on a nymph. I did have fish chasing the egg pattern, but wanted to try a nymph anyway. It worked for my first fish. The steelhead seemed pretty active, and it was really neat seeing them take our flies. I didn’t see the second fish take, it was all while watching the line. Mikey went further up stream and I was alone when it happened. The sun was bright and in my eyes even with sunglasses on. I watched my drift as much as I could until it got past the glare on the water… it twitched so slightly and I set…..
I fought it for a few seconds to make sure it was on before I yelled:
“MIKEY, another one!!!”
I saw him look downstream towards me, but I knew something was up because he didn’t come running like before. He had to be onto a fish. I saw my fish come up out of the water and I started shaking. This was a bigger one. After a little while Mikey yelled down to me again:
“Do you need help?”
Immediately I said “No.”
I knew this fight could last awhile, so I took my time and I wanted to do it alone. The fish went for cover immediately, but I just kept pulling it away from the trees and got behind it. I did my best not to let it go too far up or down stream, pulling back and walking backwards at the same time to try and control it. I saw a flat shallow area to land it on. I pulled back towards that and jumped on the shore. The fish was giving up, and I got it right tight to the shoreline.. I reached to grab the tail to land it and..
“ASHLEY!”
A splash and bend in his rod and I knew what was up! Mikey had one too!!
My fish took off far when I stalled so I had to work to bring him back in again. Mikey had his landed and came rushing down the creek in time for me to land mine. 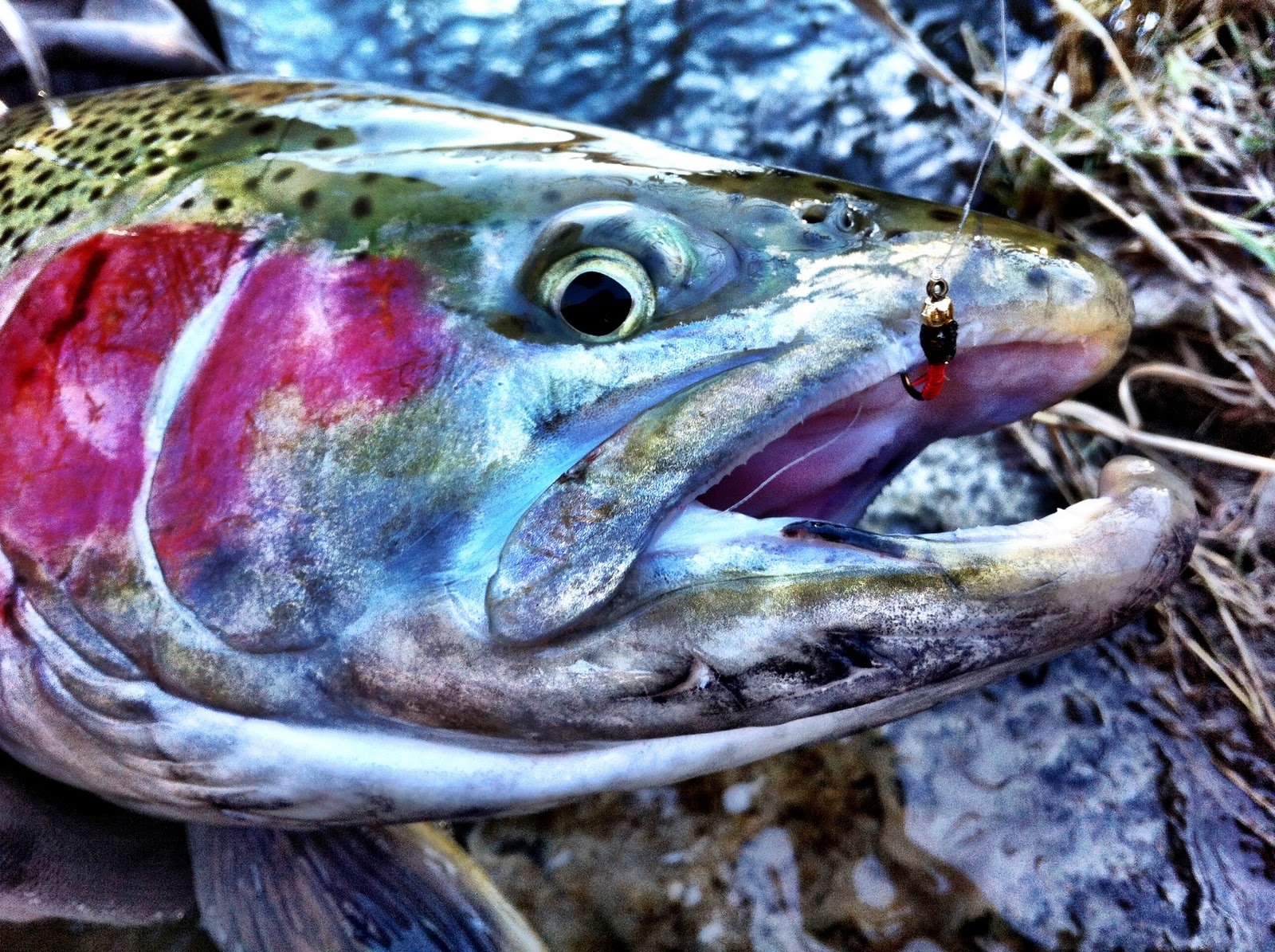 Mikey’s fish with one of the fly patterns we used 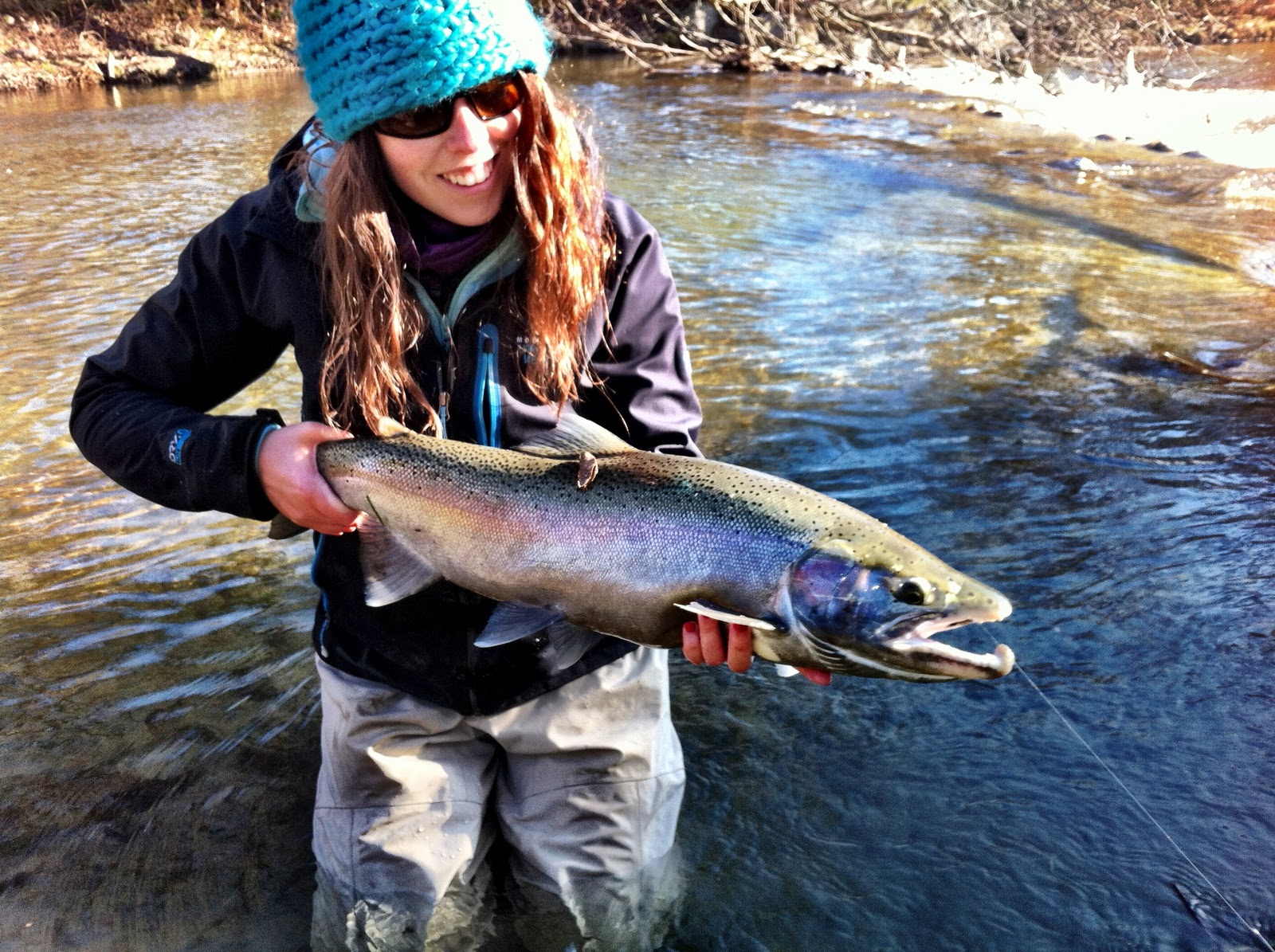 My second steelhead
I can honestly, FINALLY say, “I did it”. Many steelheaders say once you get one ‘you’re ruined’. I will admit that I have been sleeping better at night since, but the days are much longer and really just want to be back at that creek more than anywhere else. ﻿It’s all I can think about now. I guess I am ruined, but I am OK with that. I just need to go steelheading again soon…. that’s the cure.
Special thanks to Mikey, and Naoto, and G Loomis too 🙂
Ashley