Skip to content
Lately my grandpa’s fishing stories have been about ‘the one that got away’ so I realized he was in need of a good day on the water. He’d never expect to go fishing this time of year because he’s more of a summer time fisherman, so a surprise fishing trip was pretty easy to pull off. I got ahold of my friend Joe that I’ve fished with quite a few times on open water and on ice. He’s kind of a big deal and knows how to get into some serious walleye (he will laugh when he reads that)! Joe has a really nice boat that’s fully rigged, heated and really comfortable and fishable, which is perfect for my grandpa who is 78. Joe cleared his schedule for us to fish Sunday!

My dad and I formed a plan for the surprise. My dad asked my grandpa to join him on an early morning road trip for Sunday. My grandpa loves going on any sort of outing, so he didn’t even ask questions, he just agreed to go. My dad planned to meet with me at Tim Hortons around 6:15am, and then we would carpool and meet Joe at his boat. I walked into Tim Hortons and my grandpa was surprised to see me. I asked ‘are you ready to go fishing?’ and he laughed. He thought I was kidding, so he said ‘I forgot my fishing pole’ and to that I said ‘we have you covered’. He finally believed us when my dad explained where we were going. My grandpa was concerned at first because he didn’t have any warm clothing, but my dad had it hidden in the truck the night before. After he realized what we had done, he was SO excited and surprised!! The look on his face was priceless. 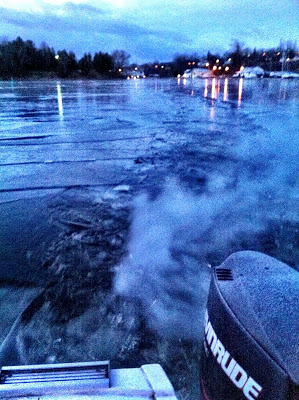 We met up with Joe and broke our way out of the harbor, which was covered in ice! Extreme walleye hunters!
Not far into the morning the first walleye was on: 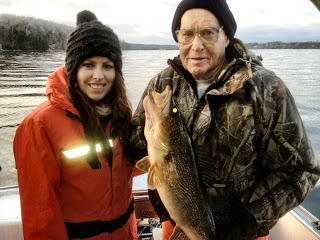 My grandpa was thrilled at the first fish and said his day was already made. The fish was guessed at around 7 pounds, which was his personal best! His eyes were glued to the rods after that, and he was in awe of the electronics, line counters, planer boards, etc. Things have definitely changed since he began fishing. My dad and I wanted him to land every fish, and I knew Joe would show him a good day on the water!
Just when he thought things couldn’t get any better, he got fish #2: 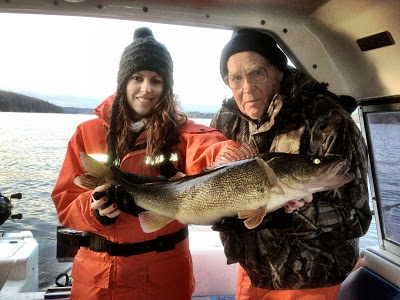 9.1 pounds.. his new personal best!
Fish number 3 weighed in at 10.4 pounds erasing the previous personal bests, fish number 4 was around 5 pounds, and fish number 5 was 8.1 pounds!! My grandpa was having the best day!! He lost a couple fish, but was so happy at every fish caught! He beat his personal best 3 times…. until this hawg: 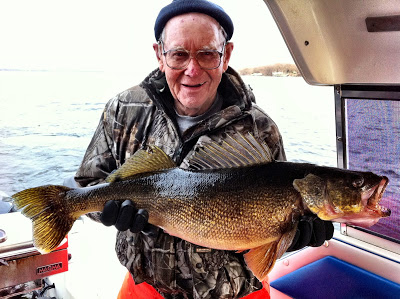 A nice chunk of 12.05 pounds of Quinte gold! The look on his face says it all! 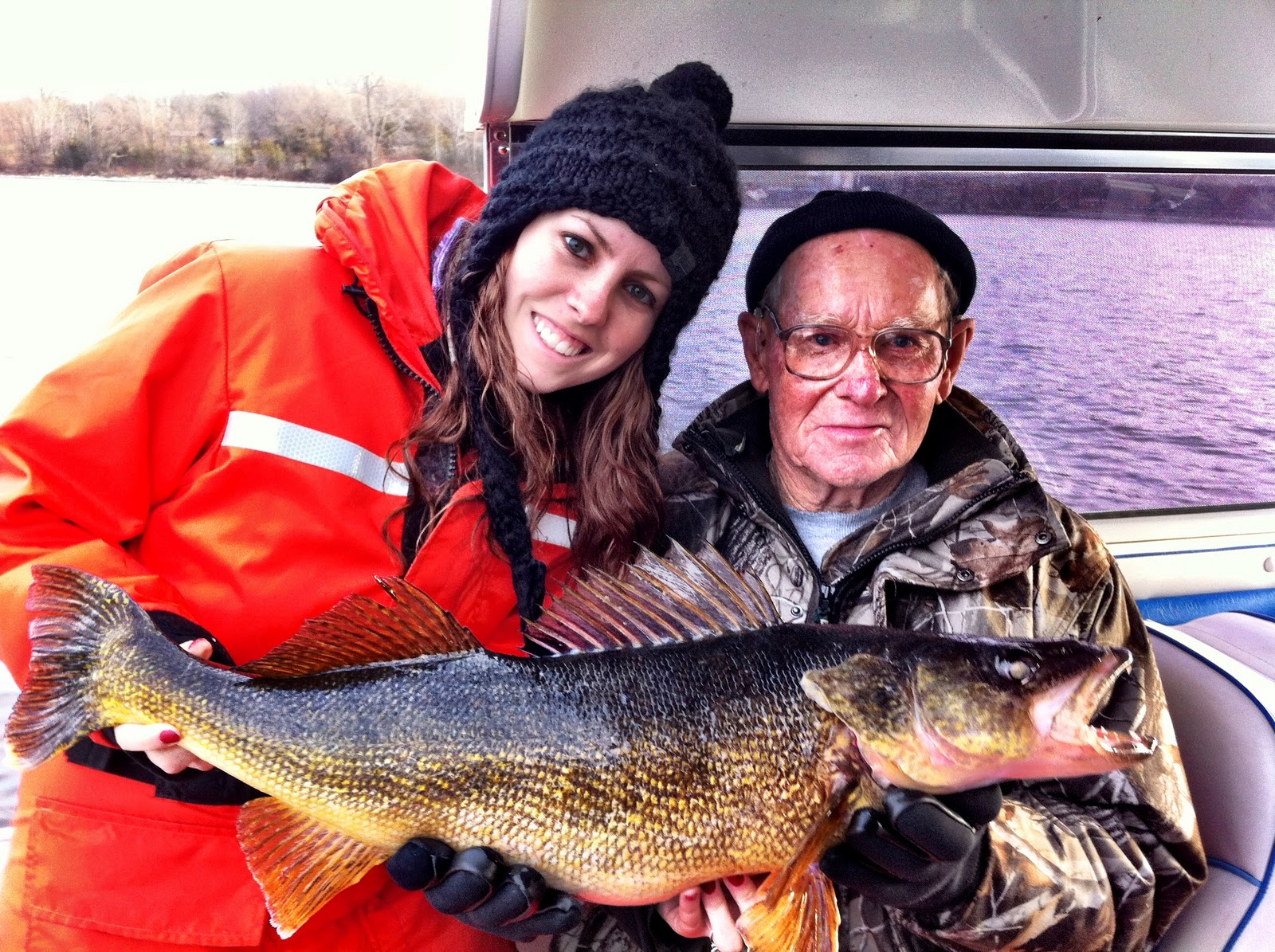 Myself, my grandpa and his personal best walleye – 12.05 pounds! This photo is a framer 🙂
This last fish was the big one! Joe grabbed the scale and we guessed the weight without seeing the scale.. I snuck to take a look and said ‘Grandpa, it’s 12.05!’ – I’ll never forget that look on his face… his words were: ‘I won the lottery!’
It’s important to pass on the sport of fishing to others, no matter their age or experience. I am lucky enough to have friends like Joe that have the skills and experience that I can learn from. It was really great to give my grandpa the chance to experience Bay Of Quinte walleye fishing at it’s prime! I know he will talk about this day for a long time, and he already has plans to go out again.
If I don’t post again before Christmas….. 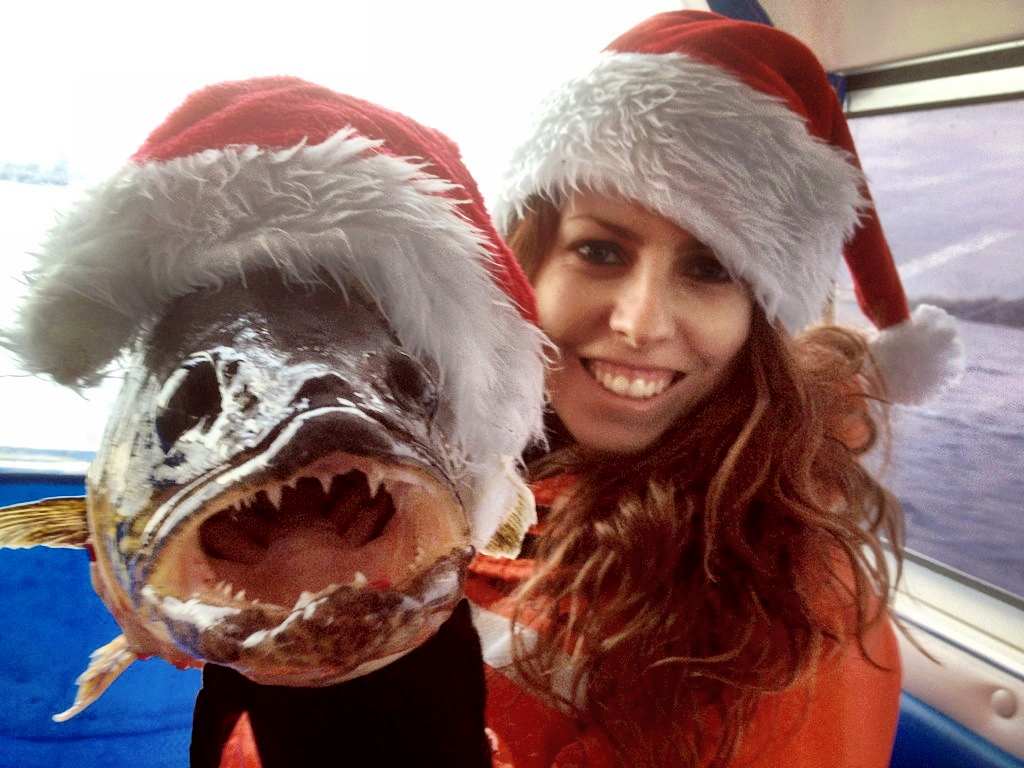 MERRY FISHMAS from SheLovesToFish.com!
Give the gift of fishing 🙂