After watching countless episodes of Major League Fishing, open water bass fishing was on my mind. Sure, I love winter and ice fishing, but open water bass just gets my heart pumping. Spring and summer are my favourite seasons here in Canada. Eric and I began talking about how incredible it would be to escape to the south and do some bass fishing and that’s how it all began, planning a trip to FLORIDA! It was a place on my bucket list. It would be an amazing experience to drive away from wintery Ottawa mid-February and into summer. We began planning and mapping out the details of this trip a month in advance, and would depart on February 23rd and be gone for two weeks. My brother, John, also came along on this adventure. The best part – bringing my Alumacraft, Ruby! 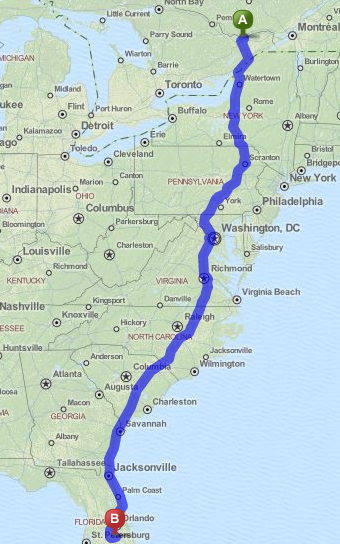 Leaving from Ottawa, Canada, we made our way through New York, Pennsylvania, Maryland, Virginia, North Carolina, South Carolina, Georgia, to finally arrive in Florida after 26 hours of straight driving. The climate change was remarkable. We left snow behind in Canada and drove through what felt like the seasons, until finally arriving to ‘summertime’! We alternated driving and sleeping to save time and make it to Lake Wales in just over a day. Our destination was Camp Mack, a sixty-acre fishing resort on Kissimmee Lake, what a heavenly place! 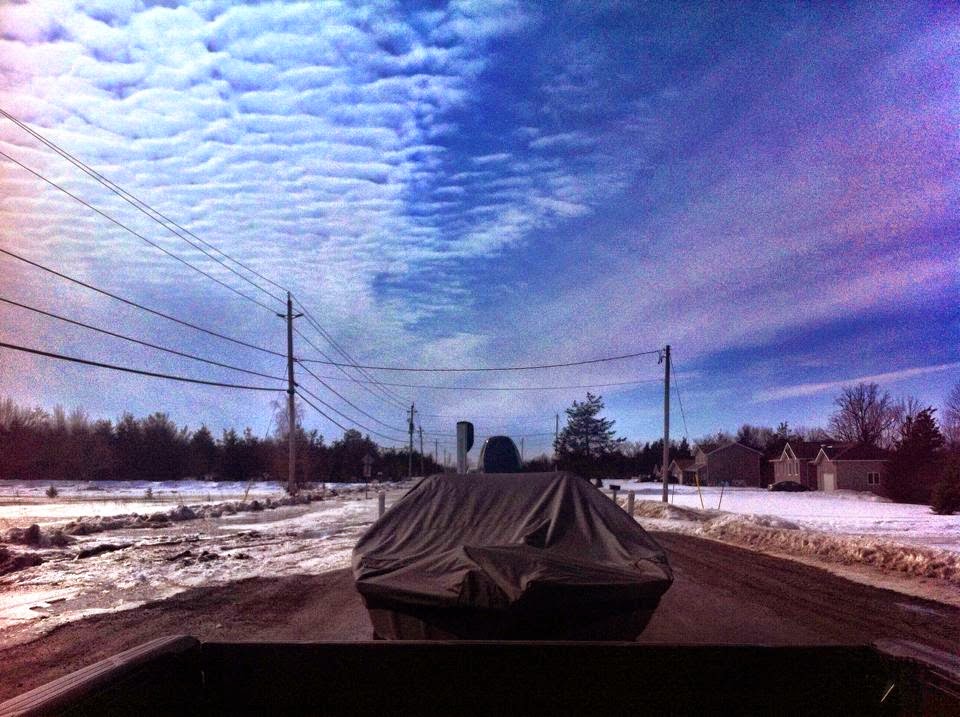 Leaving the snow behind… 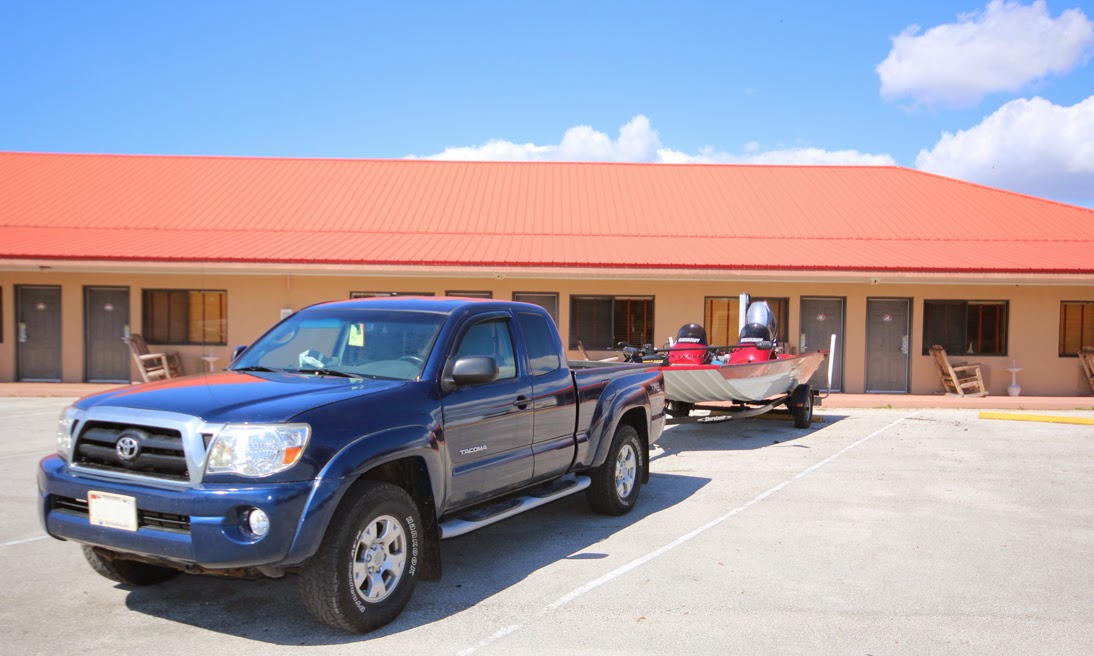 Arriving to sunshine!
We stayed at the Liars Motel at Camp Mack for the duration of the trip. (Check out the boat-sized parking spaces!) Upon arriving at Camp Mack, we were immediately impressed with the lodging at the Motel. We didn’t require much as the goal of the trip was to eat, sleep, and FISH as much as possible, but the rooms were very cozy, cottage-like and very clean! The housekeeping staff were wonderful and the resort is an anglers paradise.
Arriving during a passing cold front made bass fishing a little tricky to figure out for the first few days. The ‘trouble’ with Florida fishing…..??
EVERYTHING LOOKS FISHABLE! 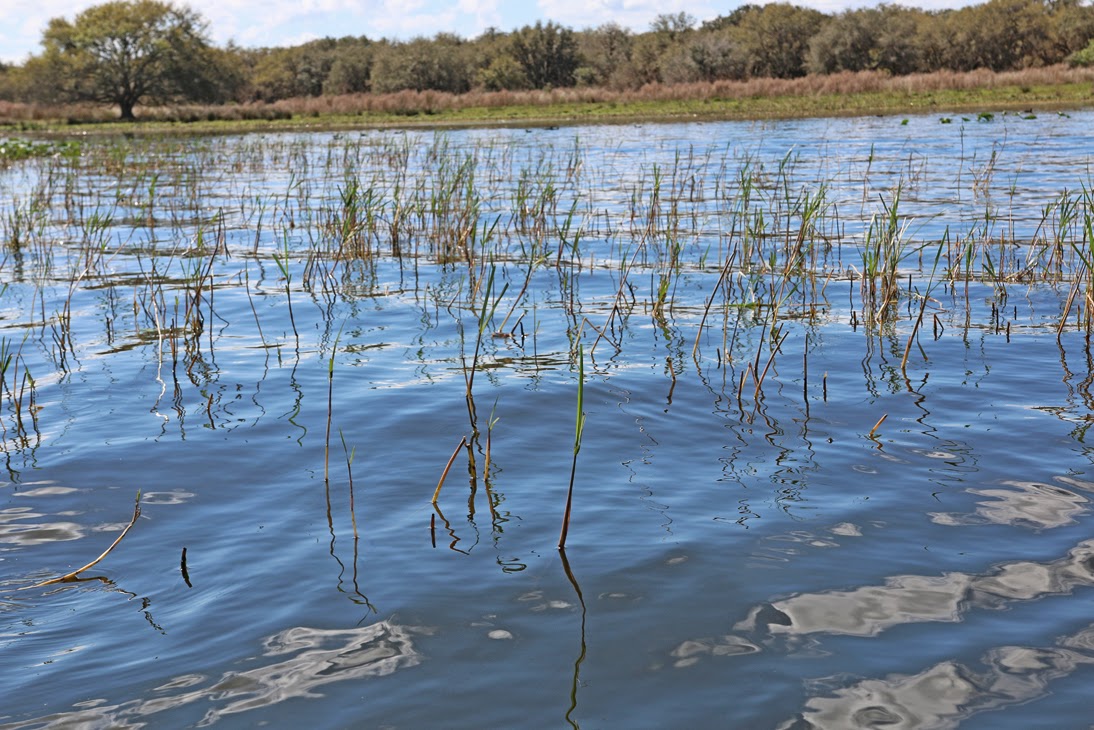 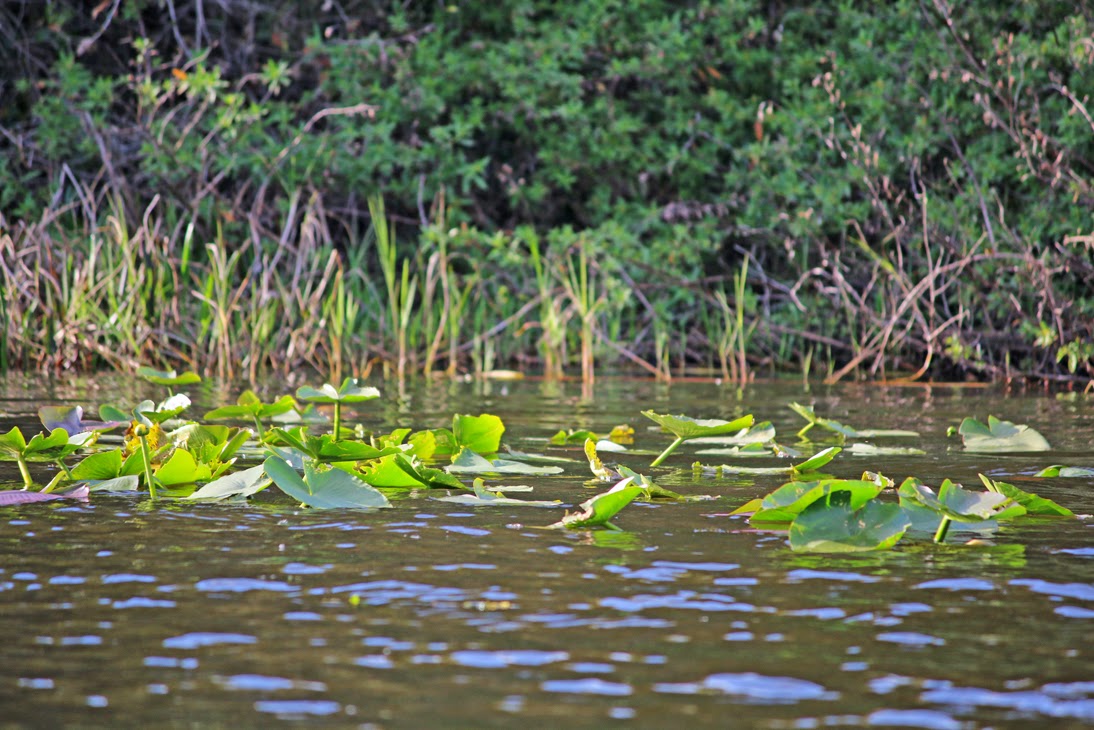 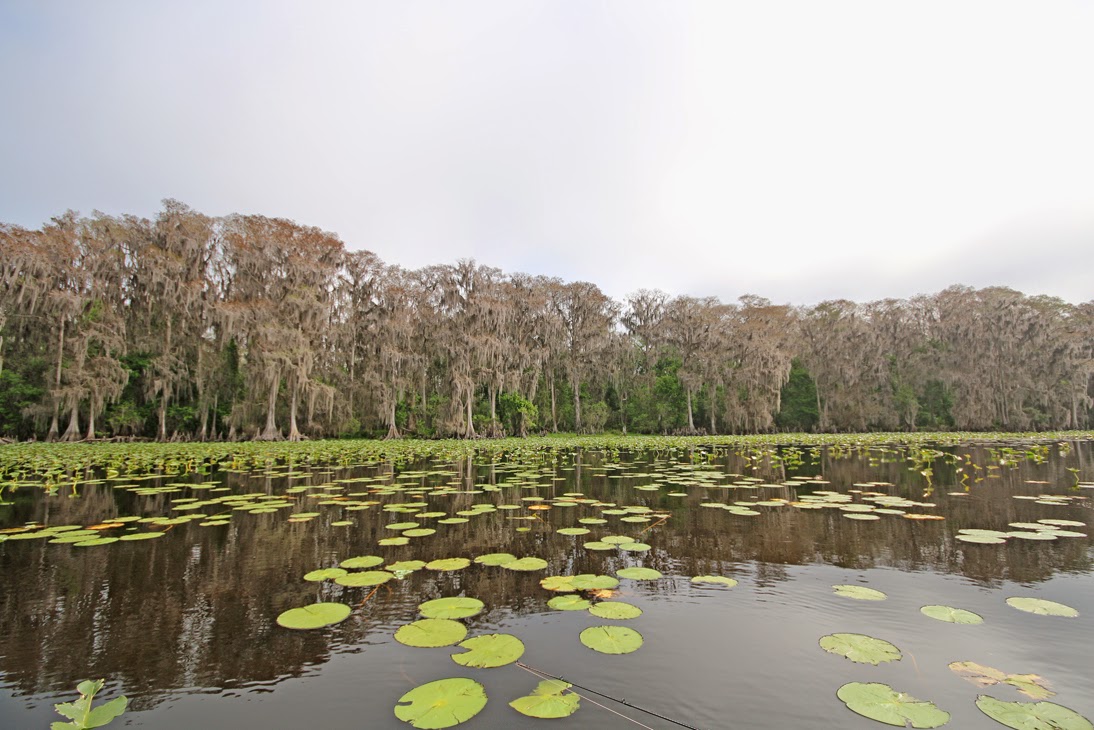 With endless healthy structure as far as the eye could see, it was hard to know where to begin. We were successful in catching fish each day, but it was keying-in on specifics: locations, vegetation, water temperatures, and the presence of baitfish that consistently put fish in the boat for us. The main thing was slowing down our presentations as the bass were staging to spawn. When everything looks so good, it’s easy to want to cover a lot of water quickly. I had hoped for a topwater bite, but it just wasn’t happening.
Our main targeted species of this trip was largemouth bass: 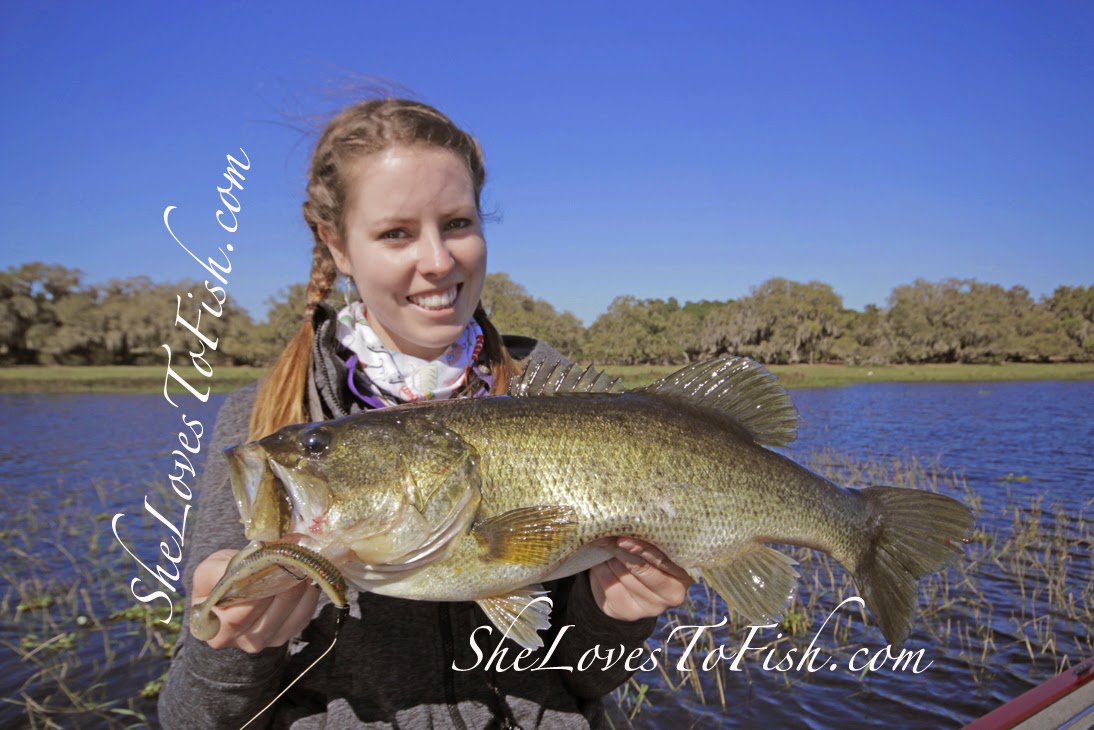 My biggest of the trip, a five-pounder! I caught this fish on a TriggerX Slop Hopper by working it super slowly through the Kissimmee grass. 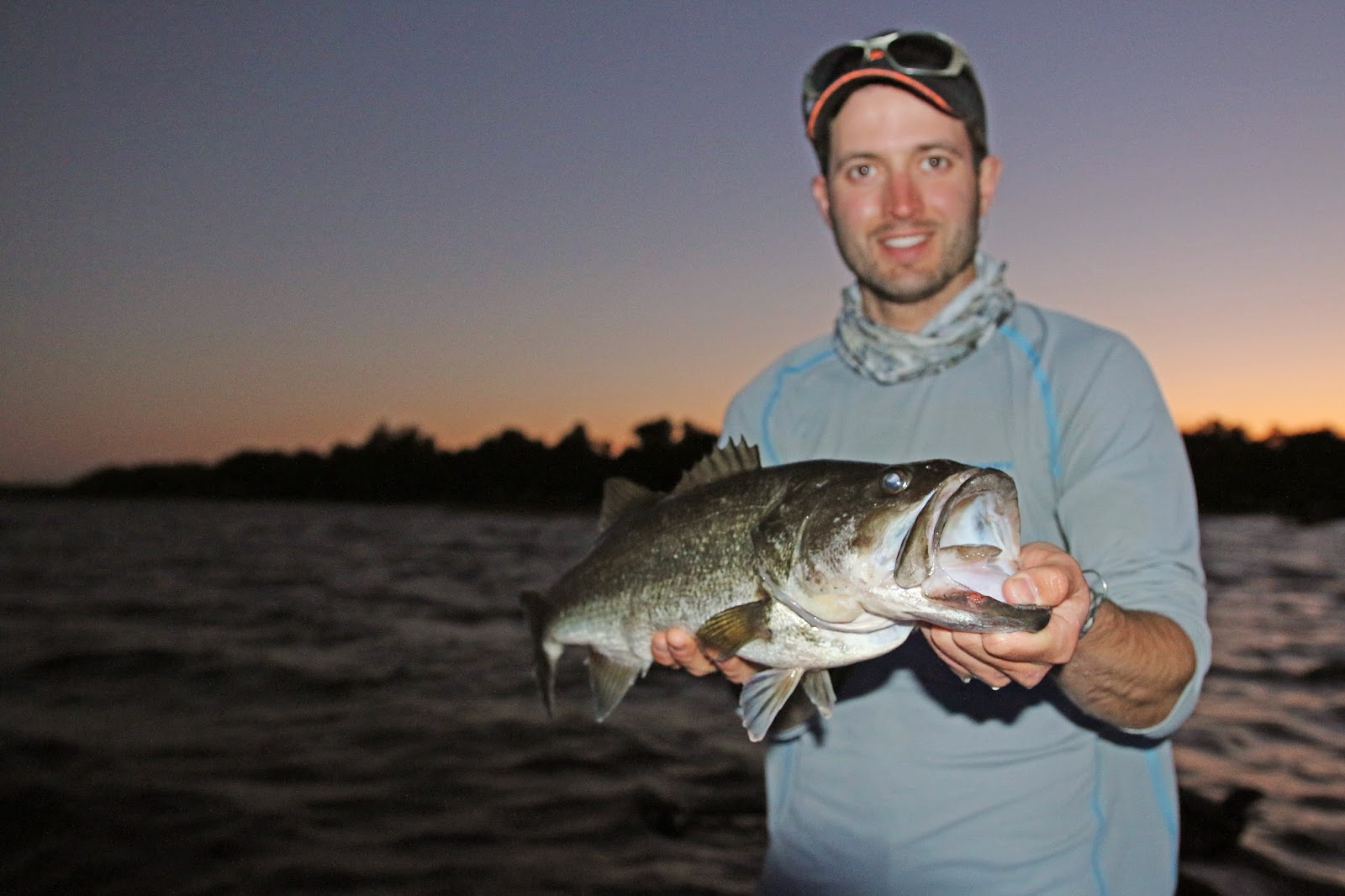 Eric’s four-and-a-half pounder! One evening we were fishing a creek mouth when bait began busting all around being chased by largemouth bass! It was exciting sight to see. We casted X-Rap Props and surface baits and had great success until the wind picked up and shut the bait down and the bass moved out of the area.
Aside from largemouth, we had the opportunity to target a few other species: 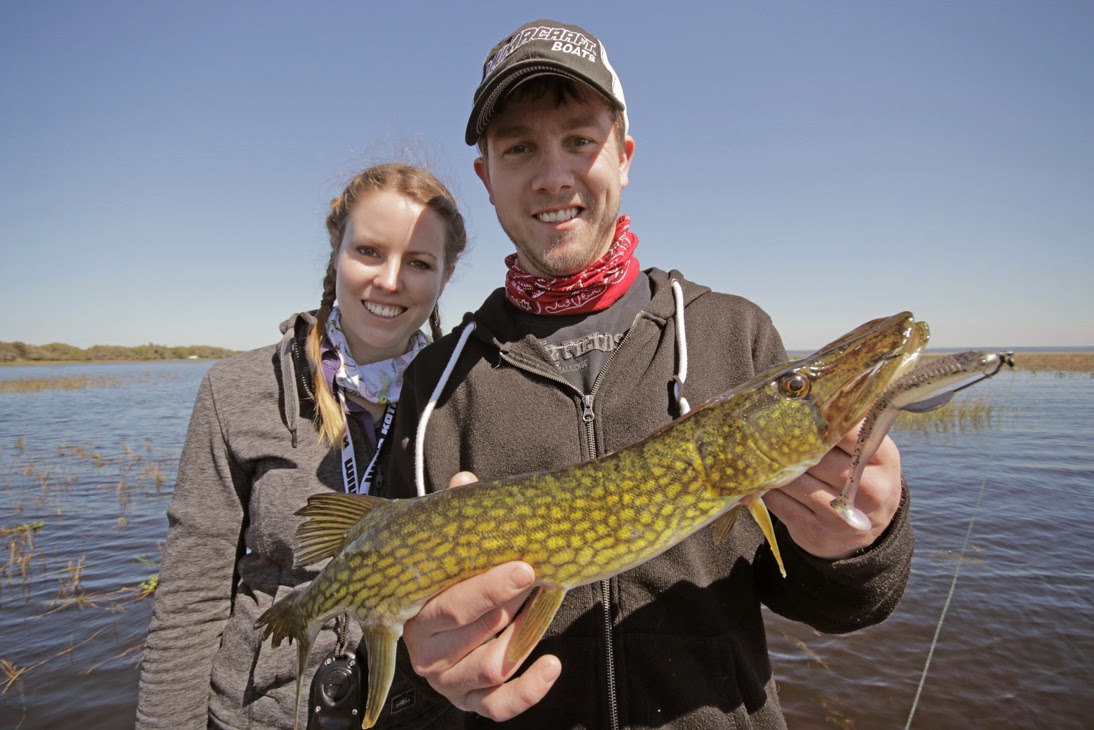 John with a chain pickerel! The chain pickerel were aggressive and we boated a few on our bass gear including TriggerX Slop Hoppers and Flutter Worms. 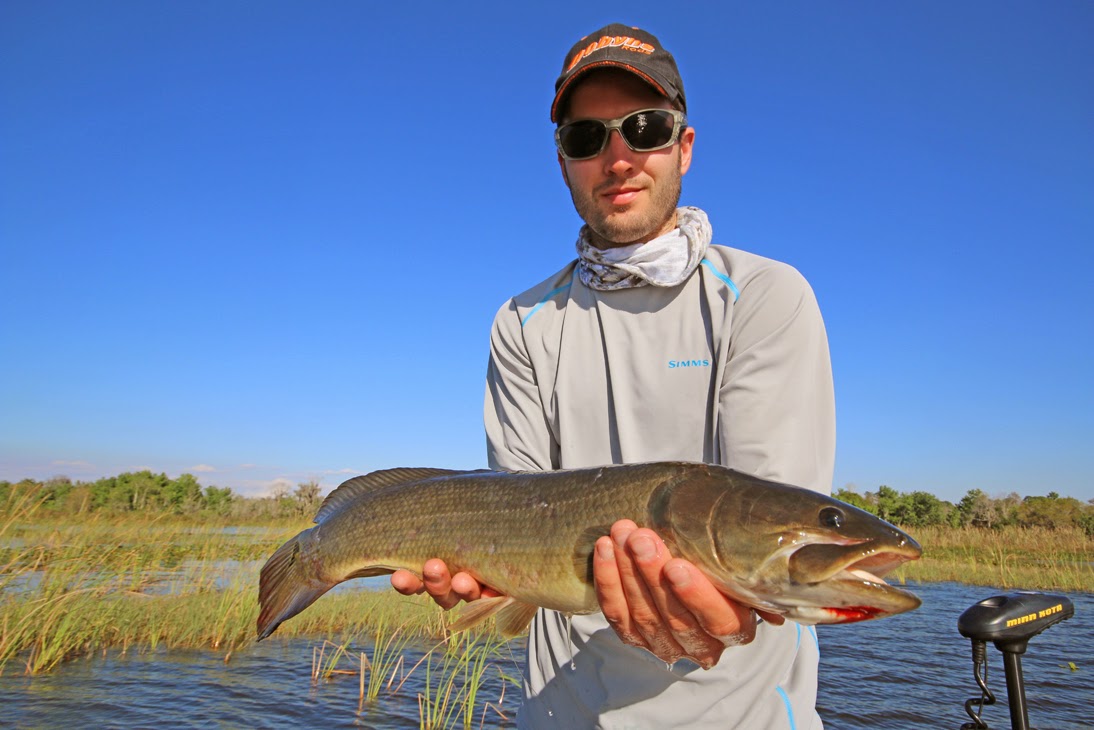 Eric with a bowfin! Eric hooked into a few bowfin in very shallow water while using a punch rig. 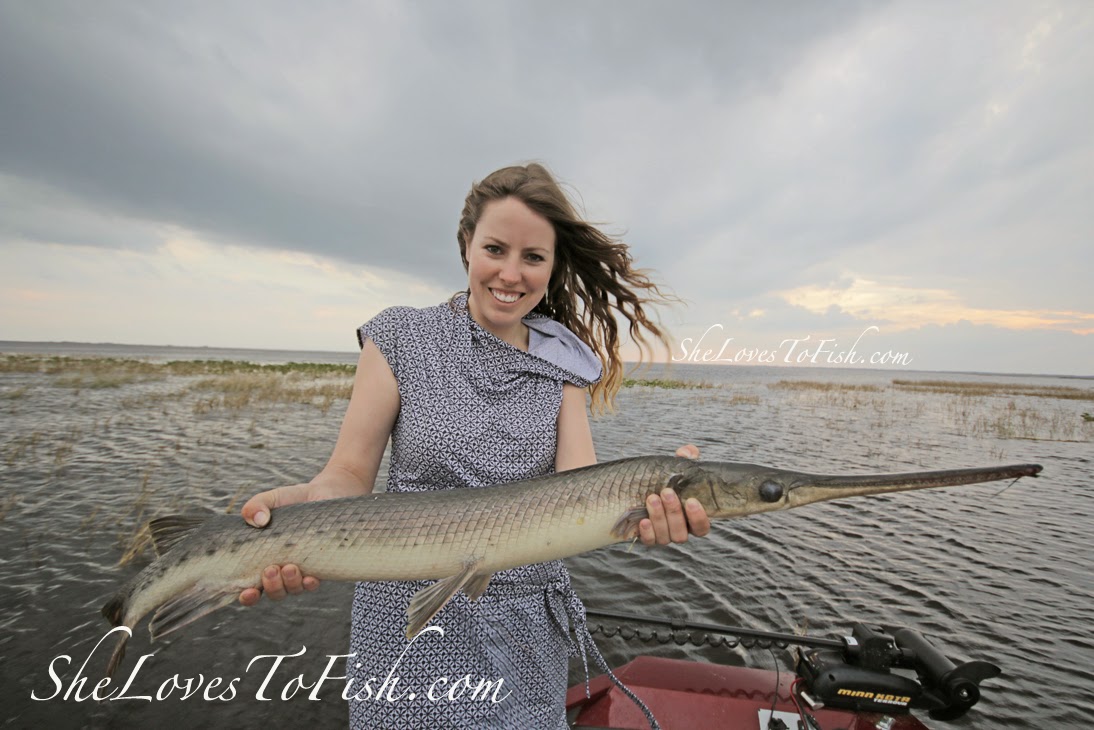 My GAR! We found gar surfacing in the shallows several times, and targeted them using Rapala X-Raps. These baits worked well as they suspend when paused, so the gar would stalk and crush them! The story behind this fish: as you can see in the photo there’s a storm brewing. We knew it was time to head back to shore but saw a school of gar surfacing so I decided to try a few casts. I hooked into this fish and it went ballistic, jumping clean out of the water a few times and then getting the line wrapped in the trolling motor. Eric grabbed the motor and freed the fish, and thankfully it was still hooked! After it was freed from the motor, I brought it to the boat where it barely fit in the net. A quick photo, and release and back to shore we went to let the storm pass. 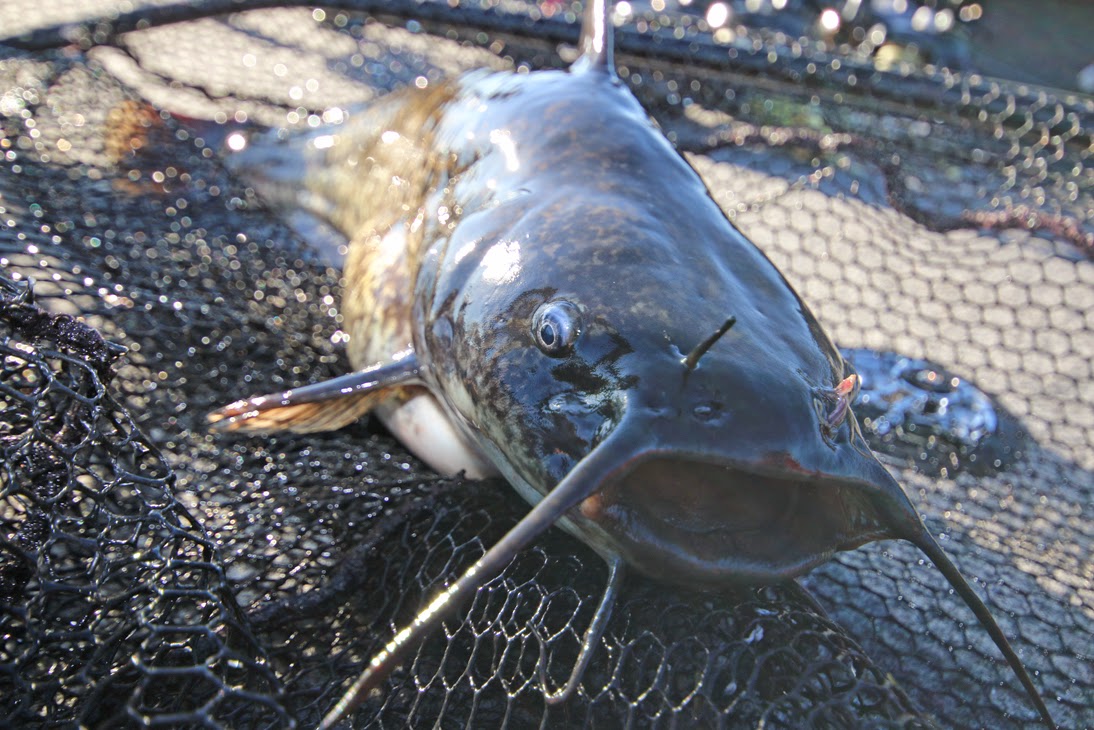 I also landed this catfish – meow!
Fishing was unreal, but it was absolutely incredible to be back in my boat on the open water after a long winter in Ottawa! I really missed her 🙂 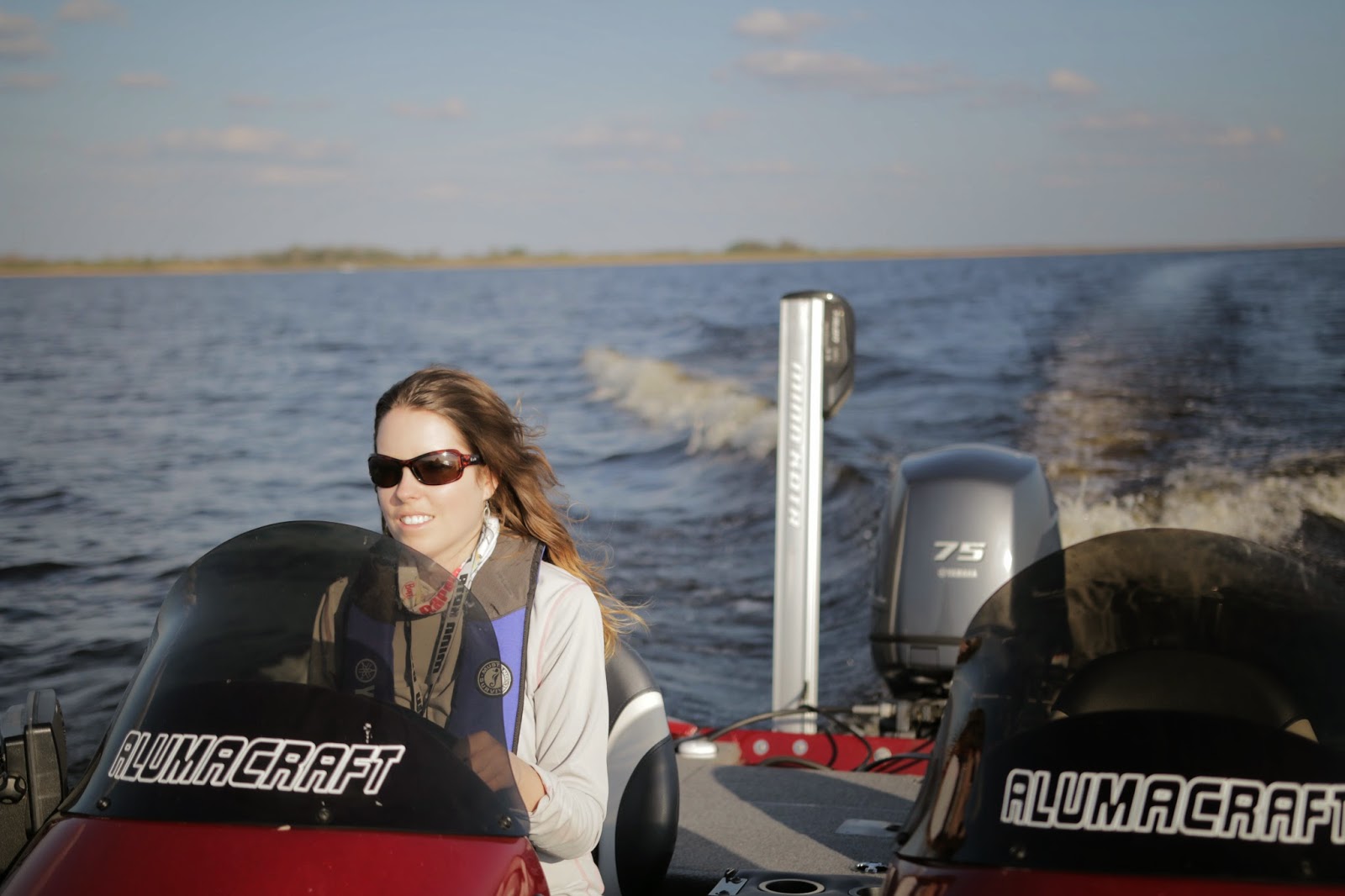 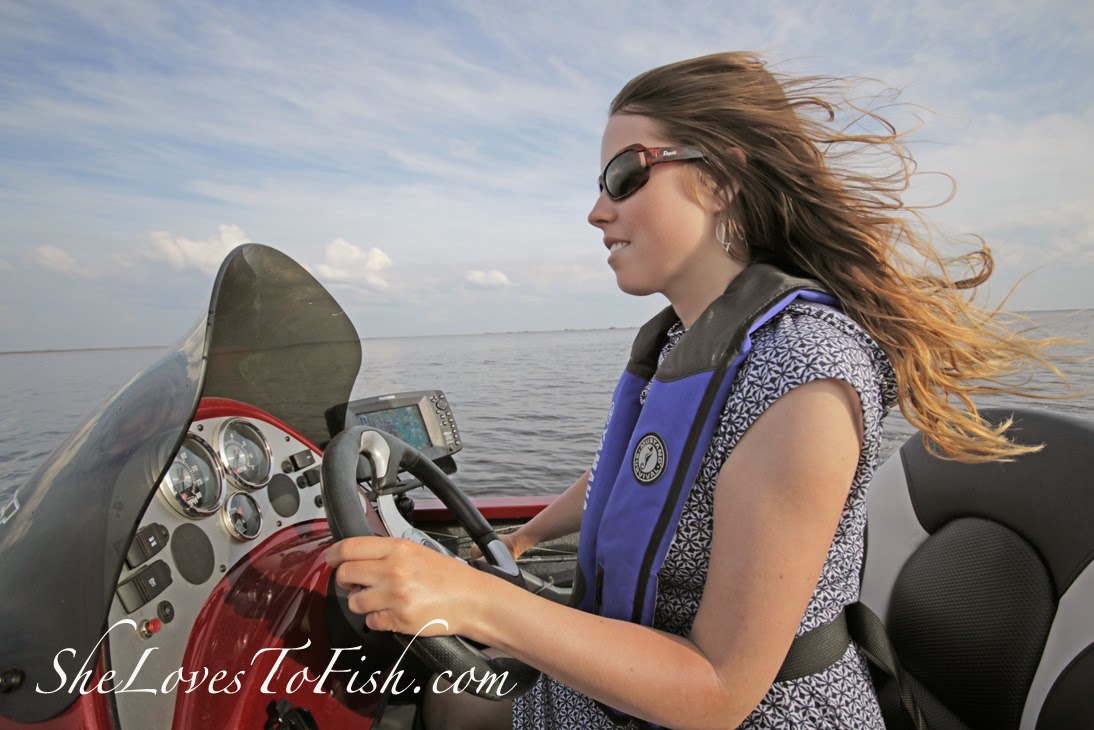 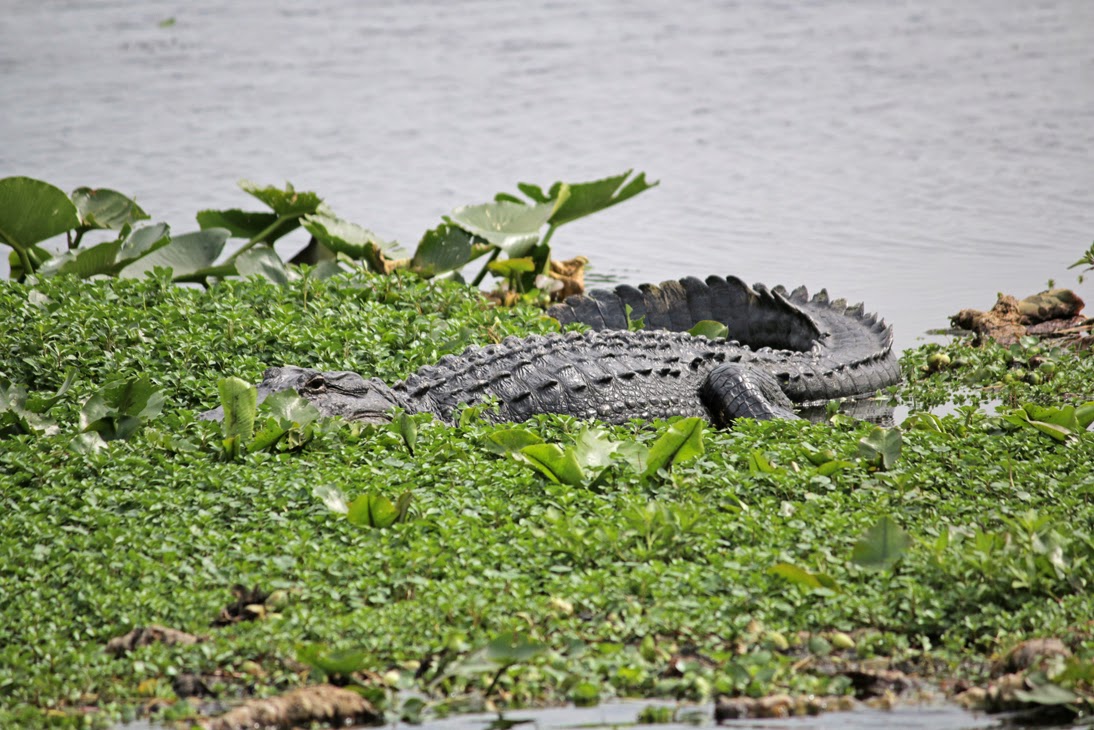 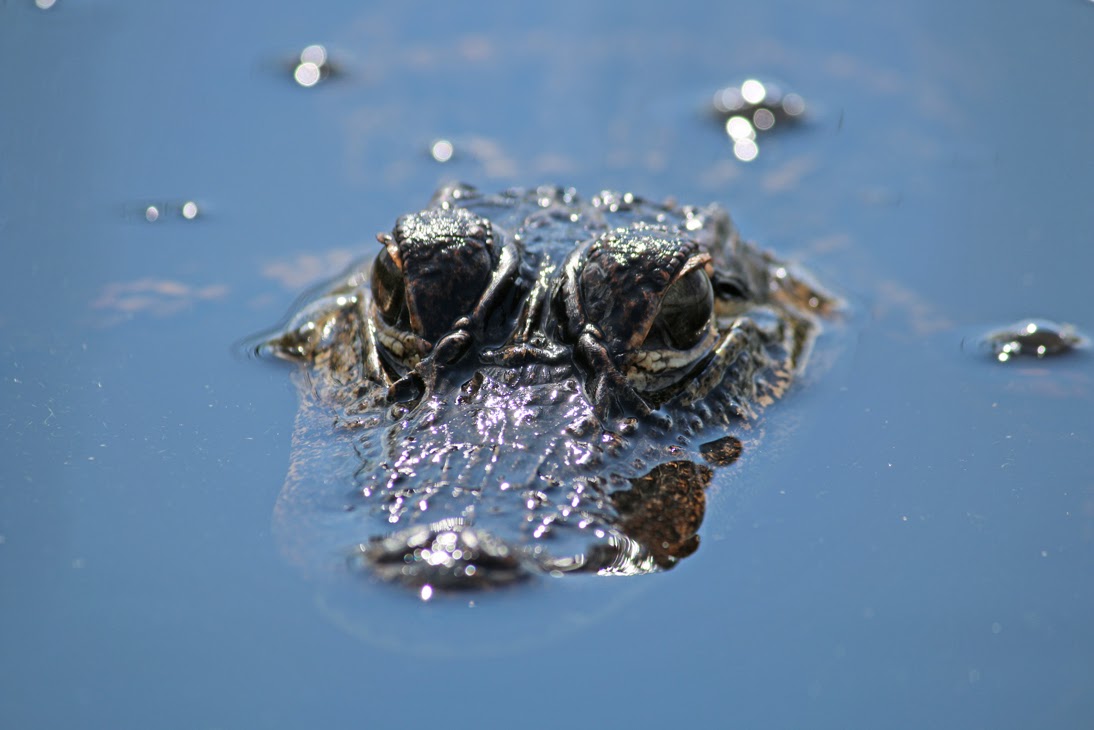 Alligators were everywhere! It was pretty unreal for me to see them in the wild (as opposed to the zoo). They kept their distance for the most part except the curious young alligators, like the one in the bottom photo that came right up to my boat! 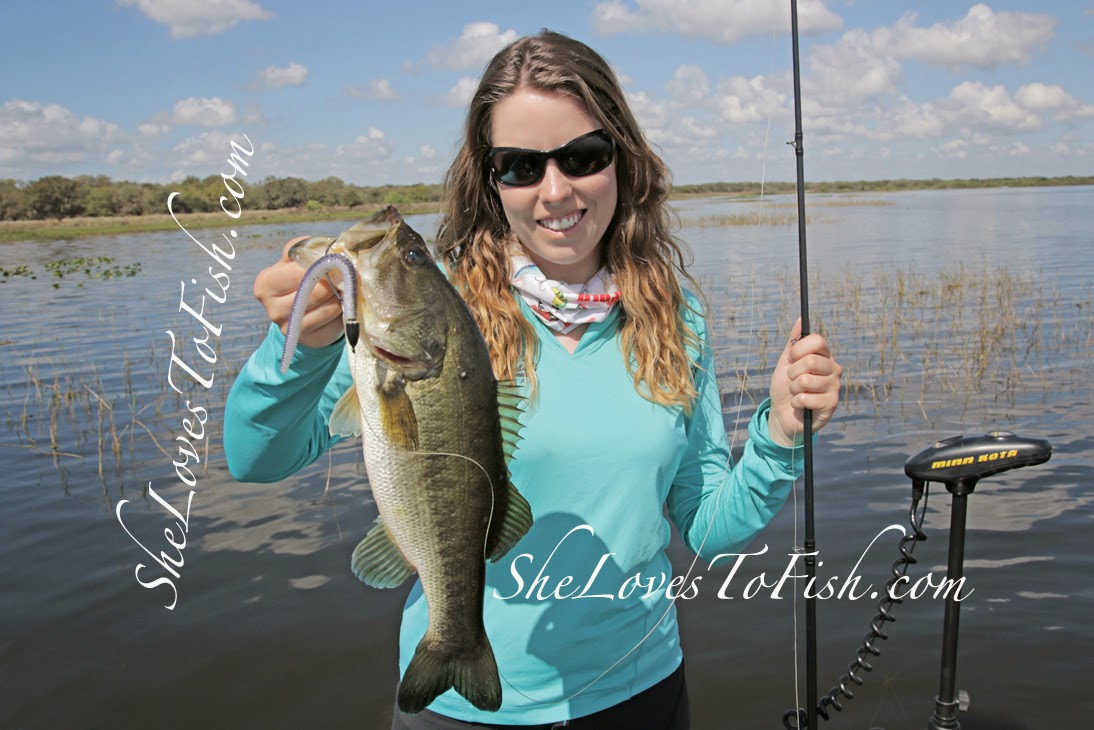 Another productive presentation on this trip: Texas-rigged Flutter Worms with 3/8th ounce Ultra-Tungsten weights. The best way to fish was slowly and the Flutter Worms were effective in cutting through even the thickest cover where the fish were hiding. 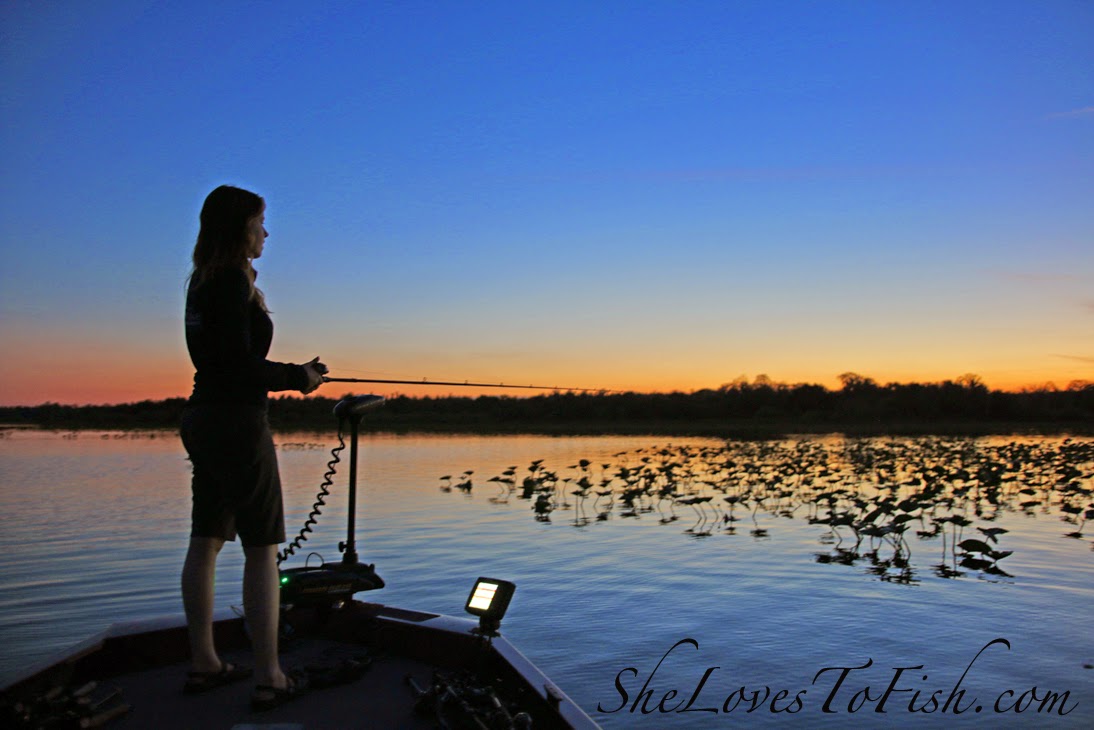 After ten straight days of fishing, it was time to head back home to winter. It was the trip of a lifetime and I cannot wait to hopefully go back again someday! We will definitely stay at Camp Mack again and fish in pursuit of the monster bass that Florida is known for!
On our way back home, I stopped in Pennsylvania to visit an artist who I had connected with through Facebook. 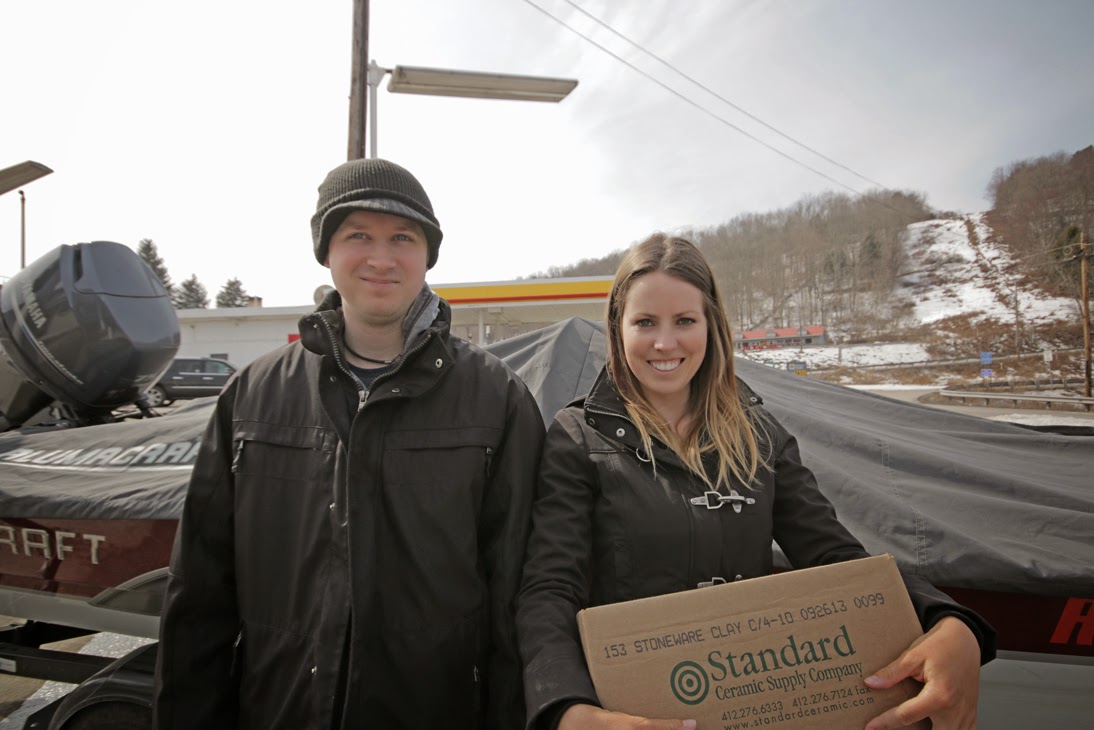 Mark Chuck is incredibly talented and I have been admiring his work for a few years. I am thrilled to say that I have finally added some of his pieces to my fish art collection! Behold: 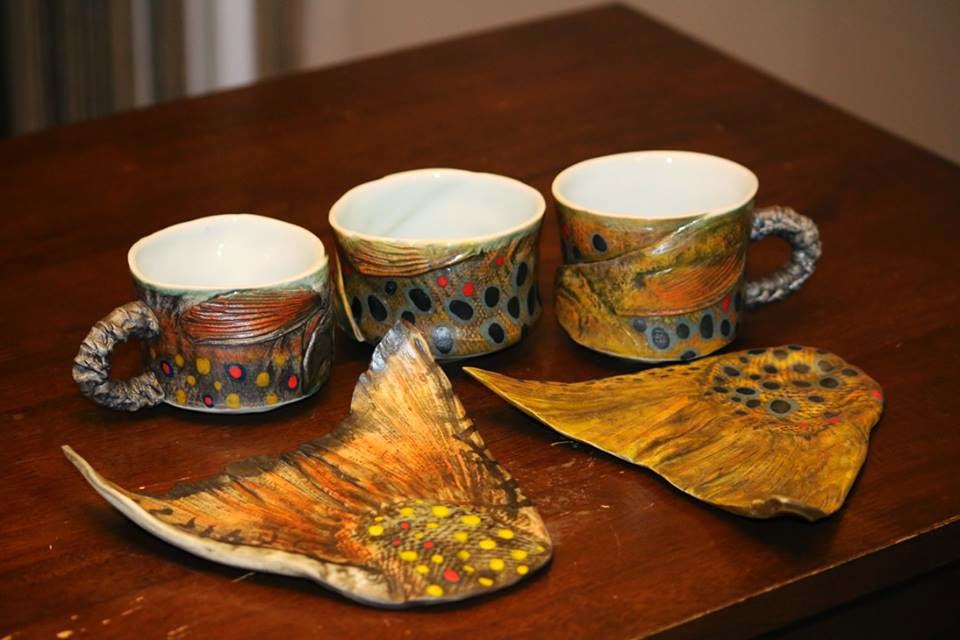 Brook trout and browns…. beautiful! Visit his website at: http://www.markchuck.com/