Since my last post, my focus has remained on targeting black crappie and so far it has been a very successful spring! The water temperatures are steadily rising and as a result, the fish are becoming more and more active in shallow bays and creeks. Hundred-fish days are not out of the question at this time of year, so if you’re thinking of getting out there for crappie or panfish the time is now! On a recent trip out with fishing pals Eric and Tyler in my Alumacraft, we decided to venture to a new lake to see if we could get into some ‘slabs’. Starting at one end of the lake with 49-degree temps, perch were biting but it wasn’t quite what we were after. Making our way to the other end of the lake, we found a promising looking bay with 60-degree water and could see small clusters of panfish beds on the Humminbird ONIX Side Imaging in about 8 feet of water. It didn’t take long for us to find a reason to stay…. 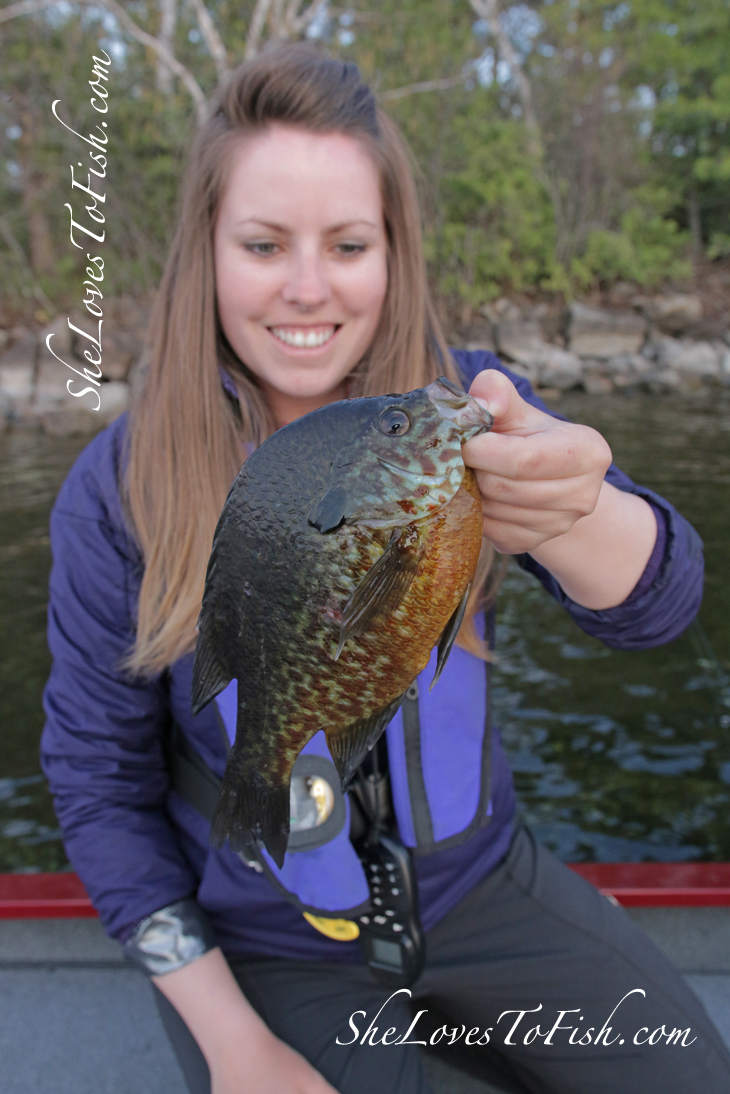 A technique I’ve found very effective this year when targeting crappie, bluegills and pumpkinseeds in deeper water is a ‘mini’ drop shot rig. I’m typically fishing in the shallows in spring but as a result of the rise and fall in temperatures, fish also move in and out of the shallows. On my ultra-light Rapala set up and 4lb test Sufix fluorocarbon, I tie on a #8 Gamakatsu Octopus hook rigged with a 1.5″ TriggerX Wax Tail in pearl white and a 1/8th ounce drop shot weight. The drop shot rig has been just the trick to get down to those fish that have not yet moved shallow or have dropped back to the deeper waters hugging bottom. 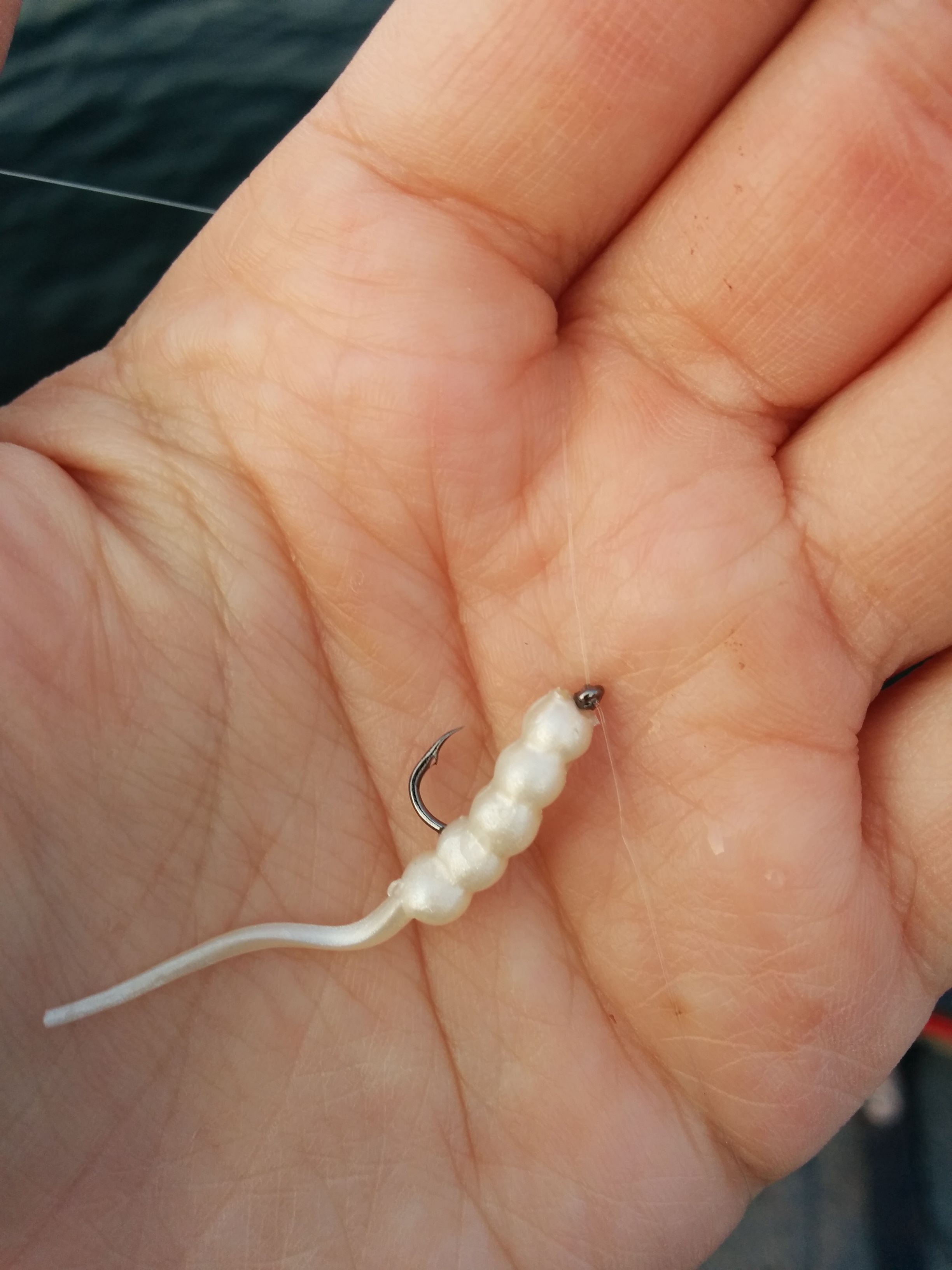 Positioned in 10 feet of water outside of the beds, I hooked into the largest pumpkinseed I had ever laid eyes on! This fish measured 10 inches long! The length of this fish was on par with the Ontario record: which was 10 inches and weighed 1 pound even….. but…. we had no scale on the boat. I put the fish in the livewell, kept fishing and contemplated keeping it to see if it was a new record. Moments later, Tyler hooked into another big pumpkinseed in the 9-inch range. We decided to bail on the crappie, stick to this area and focus on these quality ‘seeds. It proved to be a good idea as each of us caught several large pumpkinseeds with an average of 9 inches and a few 10-inchers too! As you can see below, we had a pretty good haul of them in the livewell! 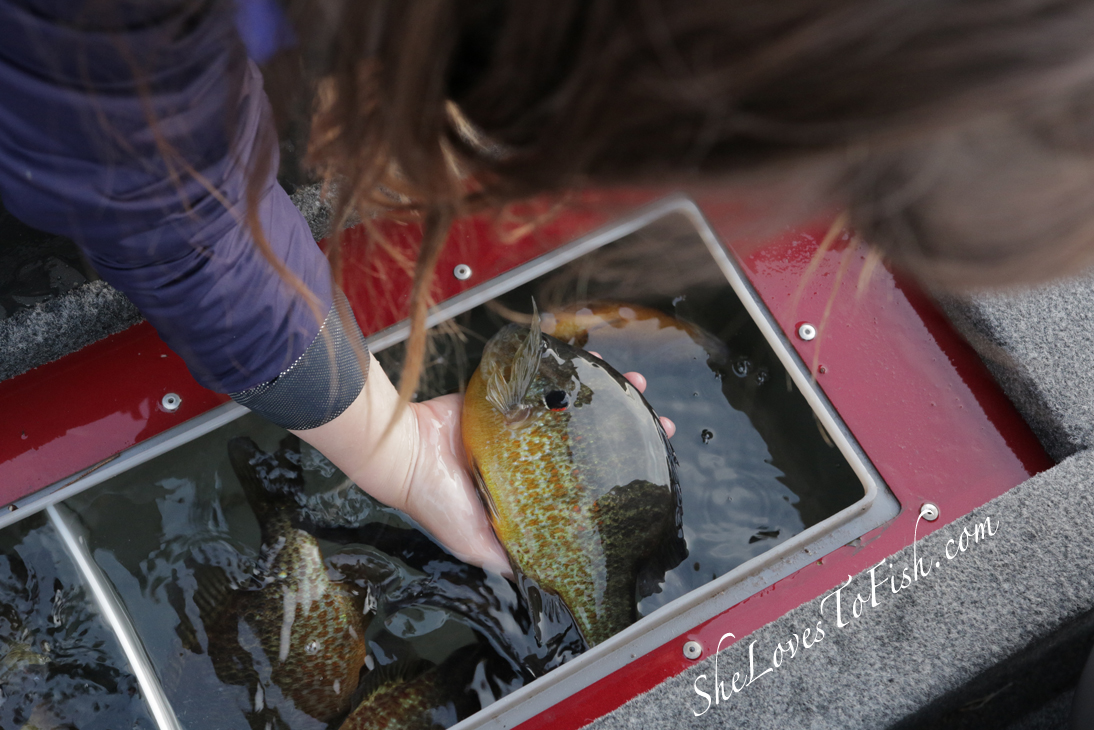 With the largest fish of the day still being my first fish, we were discussing the process of verifying a record. I did some research online and made a couple phone calls to see what the process consisted of. Without a scale and not knowing whether or not this fish was larger than a pound, I didn’t want to take the risk of keeping the fish to have it verified as it would not be released. I thought to myself:

‘I’ll just have to catch a bigger one‘.

And then it happened (shortly after the thought). Another bite that felt a little scrappier and up came the biggest pumpkinseed of the day! We were hollering and cheering so loudly that I am sure everyone on the lake could hear the commotion! 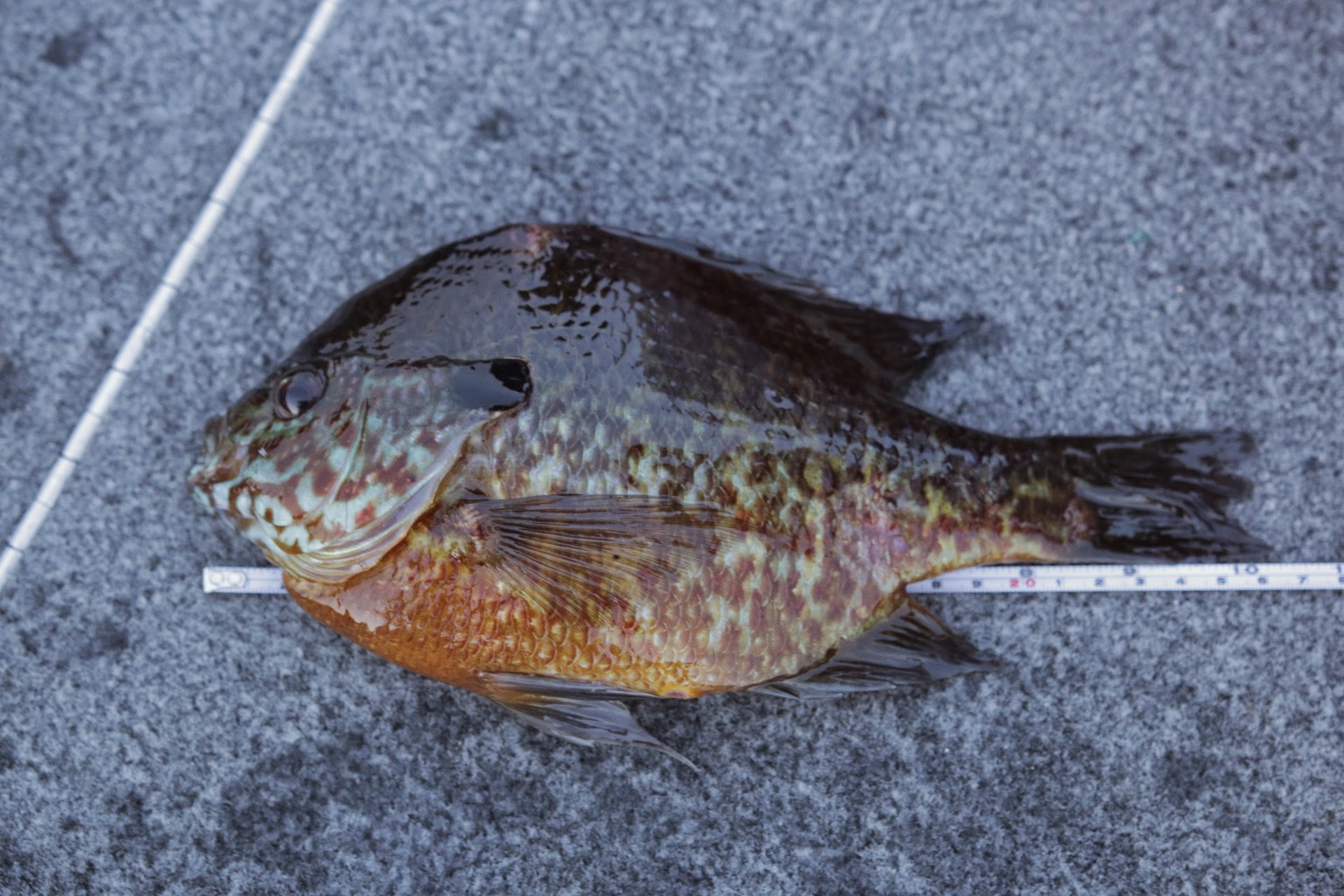 This fish measured 10.25 inches and was definitely my personal best. A few more nice ones were caught between the three of us and it was time to call it a day with the sun setting. I made the decision to release this fish and all the others with no way to know if they were larger than the record without a scale. Looking back on the photos it looks as though my biggest of the day may actually be a pumpkinseed/bluegill hybrid! I am even more pleased that I released it. Check out the release video here. The feeling that came over me when this fish swam away can only be described as pure happiness/thankful to witness such a gorgeous creature. Never in my life have I been so excited for a 10-inch fish! Haha! 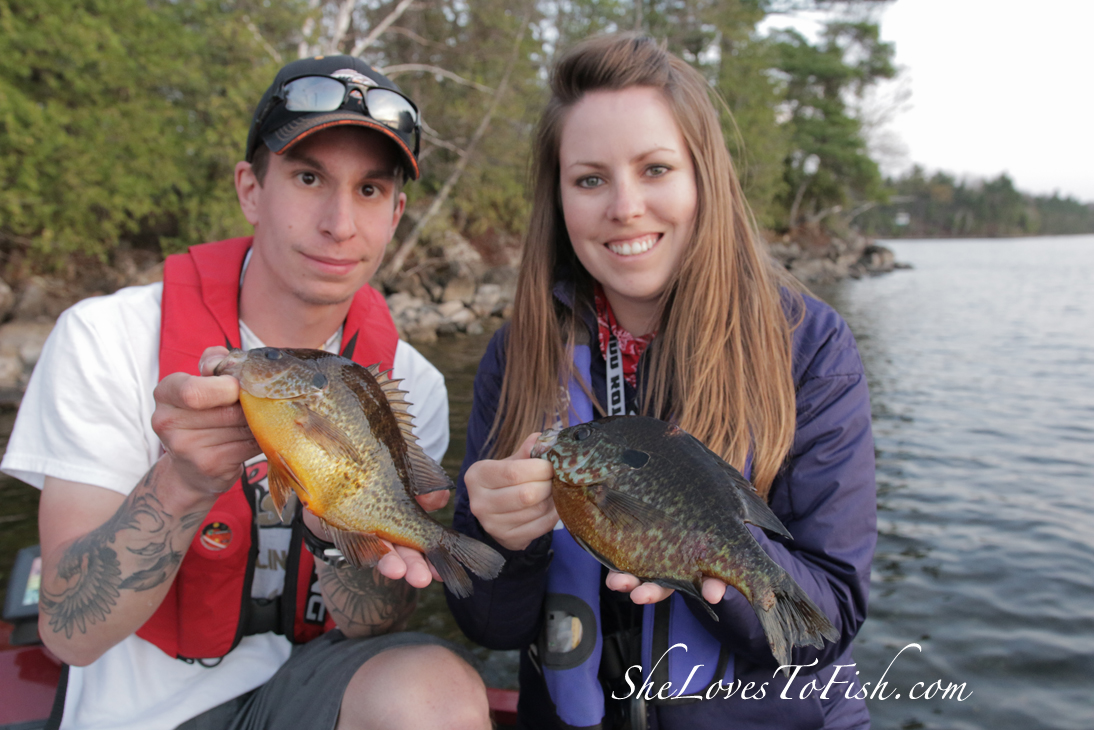 Tyler and I with a couple of our best of the day before setting them free.

Since that day, I was able to get out for another black crappie trip and the action has only gotten better! From here on out it’s time to focus on carp, walleye, pike & more! Thank you for reading! 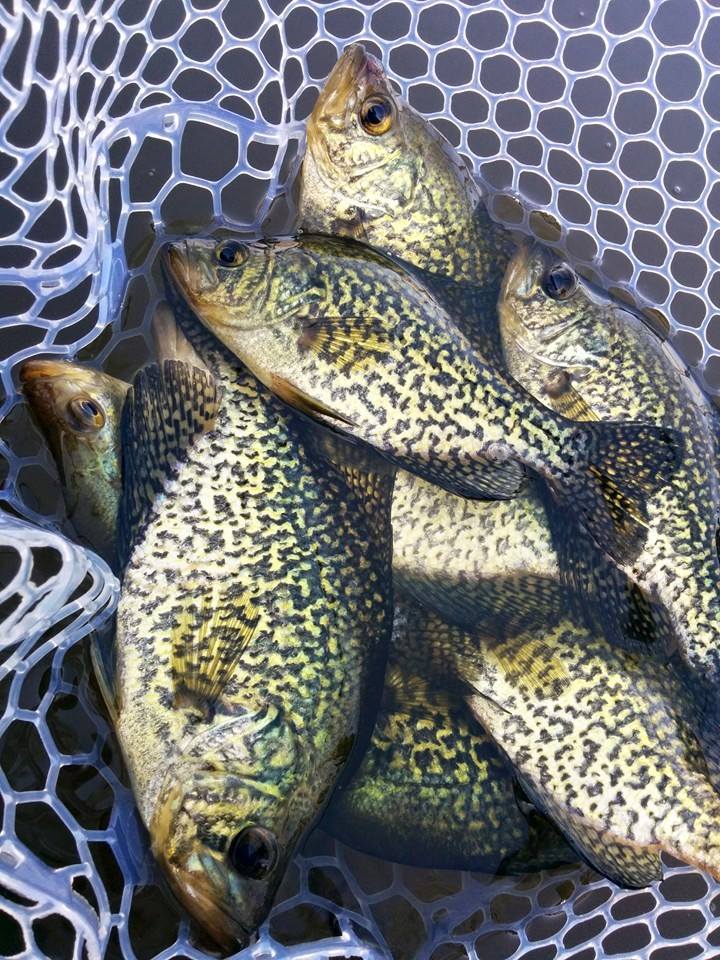 A few nice crappie from yesterdays outing just before being released.