It was a wonderfully busy summer on the water with a lot of travelling. One of my favourite adventures took place earlier this month in the Peterborough & the Kawarthas region located in Southern Ontario, Canada. I had been to the Kawarthas a couple times in the past for day trips but I was especially excited for this trip as I would be bringing my boat with Eric joining me as well for this 4-day adventure. The Kawarthas is a well known angling destination with so many lakes to explore and a wide variety of species to chase throughout the seasons. It was only natural to make this trip a multi-species adventure and set out on a few different bodies of water.

The trip began on Lower Buckhorn Lake as Eric and I checked in at Three Castles Resort where we stayed for two nights. We were greeted by Louis, the owner, and chatted with him about fishing in the area and learned more about his lovely resort. He’s super friendly and took great care of us during our stay. Three Castles has 17 cottages and suites sitting along the shores of Lower Buckhorn. Our cabin was situated on a point with a gorgeous waterfront view from all three sides and our own private dock. The cottage itself was rustic with a gleaming all-pine interior, three bedrooms, full kitchen & bath, large sitting area, front porch, and more. I loved it!

The Trent Severn Waterway lock system runs through Lower Buckhorn providing the opportunity to travel to other lakes by watercraft. There are 45 lock stations creating a winding 386kms to travel through Central Ontario – that’s a lot of possibilities. We quickly unpacked and hit the water for the afternoon. Eric had his heart set on bass and I was craving some musky action, so we decided to spend some time on both. The vegetation was lush and healthy everywhere we looked but we quickly found success in the areas where bait could be seen scattering and hopping along the surface. It was quite windy so we tucked in for shelter and started catching largemouth and smallmouth among lily pads and floating mats in the shallows on chatterbaits.

We ventured in to another sheltered area and approached a weedline adjacent to a big patch of lily pads in around 10 feet of water. I worked the outside with a large chatterbait-style musky lure (the Stud Finder by Northland) while Eric worked the edge. My Stud Finder got hammered by a nice musky who put on a display with a couple jumps before being netted! I was so pumped to get a nice musky like this in only our first afternoon in the Kawarthas!

We did a little more searching for muskies but didn’t find any others that evening. We moved up into the shallows where Eric was landing largemouth and smallmouth bass one after another. We were both happy to get our fix in just the first afternoon and were anxious to see what the remainder of the trip would hold.

The next morning brought us this amazing view from the shoreline at Three Castles Resort. Wow! 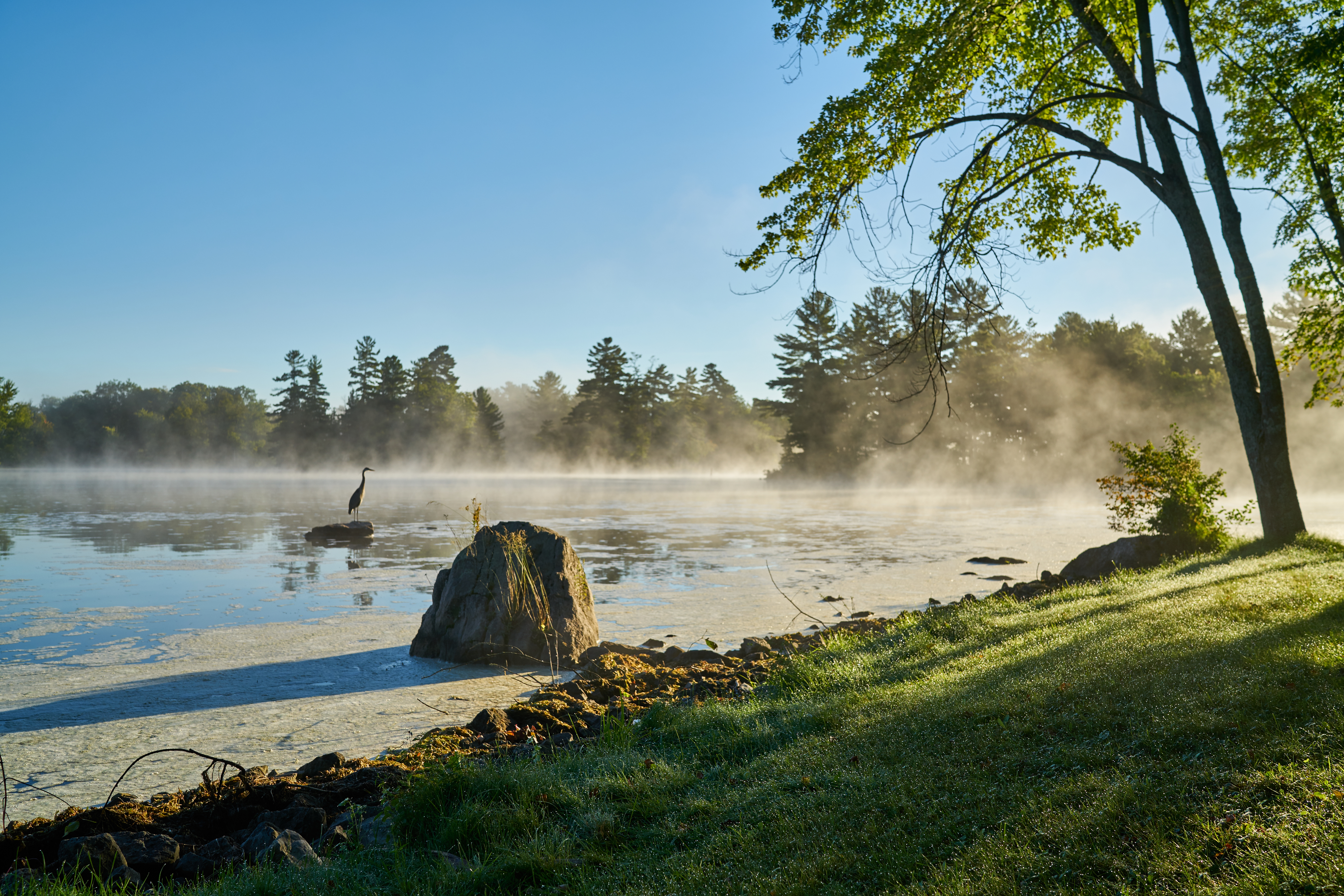 We didn’t have any wind to deal with on the second day so we decided to make a run to some offshore rocky islands to start things off. The boulders were surrounded by weeds and sloped to deeper waters providing great musky habitat. I threw a few casts tight to the boulders and a musky hit right away! When I felt my Stud Finder stop I thought I may have even hooked a rock initially but then the musky took off jumping and thrashing! Another nice fish hits the net and I was shocked it happened so quickly! I felt the musky rush and was shaking and smiling for awhile afterward. Nothing beats the adrenaline that comes from landing these gorgeous toothy creatures. Our musky rods and bass rods were in constant rotation on the deck of the boat for the remainder of the day. Eric lost a musky boat-side which stung a bit after we caught a glimpse of it but that’s the way it goes sometimes! We were happy with our catches so far and we still had two more days to explore. 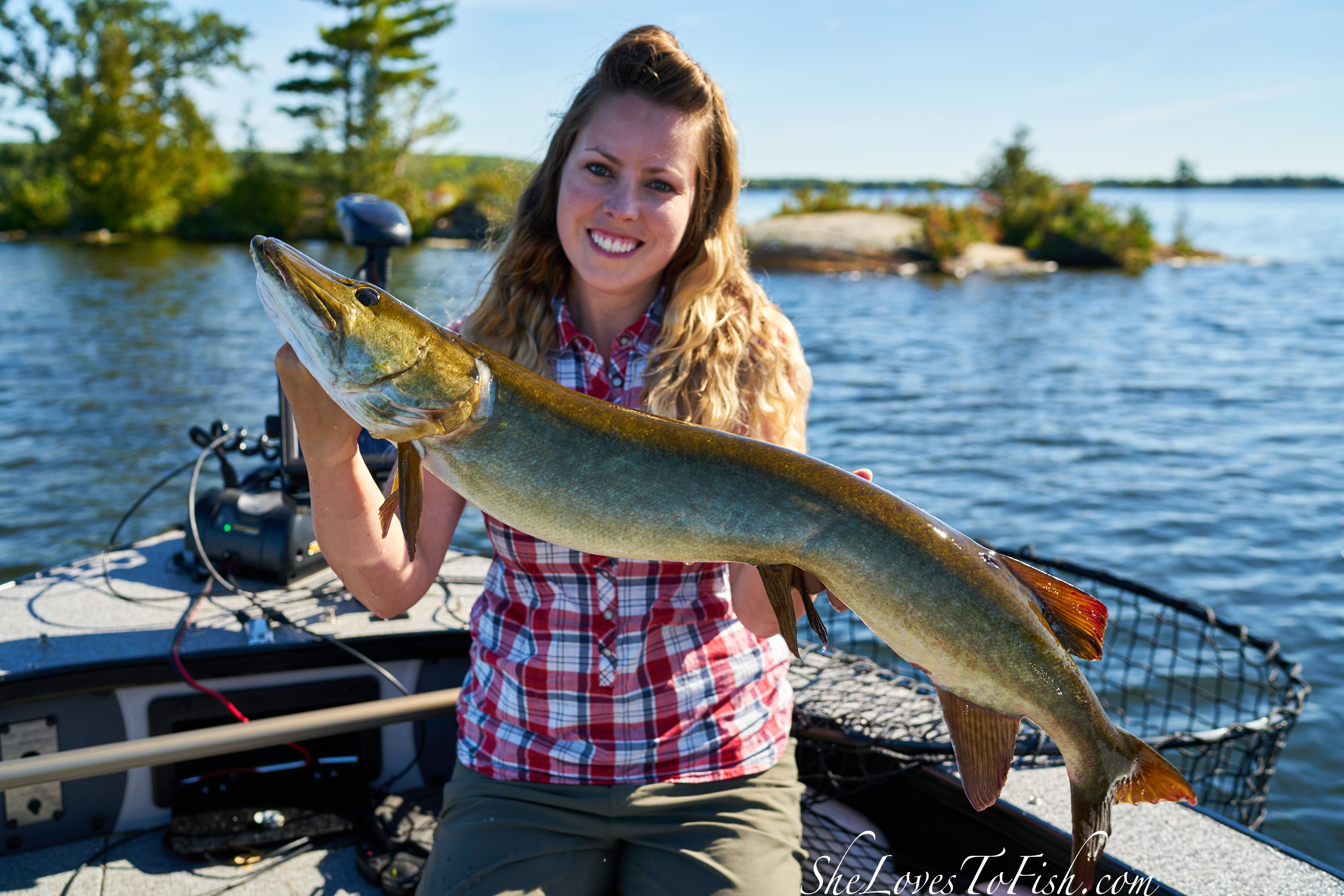 Our third day took us for a brief visit to Rice Lake but with the extreme winds we decided to change our plans a bit. Initially we would be spending the last day of our trip with Will Muschett of Peterborough Carping Guides but decided to meet up with him a day earlier, extending our carp fishing adventure. I was so excited as I had been talking back and forth with Will on Facebook leading up to our adventure. We met up with him in the evening and fished for a few hours landing one carp and broadcasting the experience in a live Facebook video. You can view the video here. It was a great start and we were hopeful for some more action the following day as we saw plenty of fish jumping and even spotted some feeding just a few feet off shore where we had chummed.

We spent the night right in Peterborough at Best Western Plus Otonabee Inn and had a lovely stay! Our room was very cozy and comfortable with a Jacuzzi, full bath, sitting area, desk/workspace, kitchenette, and a view of the river outside of our ground level balcony. There was plenty of space in the parking lot for the boat and in addition there were electrical outlets on the lamp posts to charge batteries. We had a great sleep and were anxious for the next day of carp fishing especially since we would be joined by some special guests!

During the trip I had received a message from a man named Terry who follows my fishing adventures with his son Jaden. An avid young angler himself, Jaden at the age of 12 has caught some impressive fish and over the years Terry has shared some of the images with me. Terry wondered if I may have some spare time during my visit to Peterborough to meet up and say hello to Jaden since they live in the area. I decided to invite them out to join us for the second day of our carp fishing adventure. Jaden was lucky enough that his parents let him miss a day of school during the week to join us. We were all pretty excited for Jaden, along with his parents (Terry and Clara) to join us for the day. We were hopeful that we could get Jaden into his first ever carp.

Eric and I arrived first to chum the area and get set up. Jaden and his father then arrived next and we explained the equipment we were using as it was the first time they had seen carp-specific gear. They were both anxious to learn about it. Carp can be caught on basic equipment but due to their size and power it’s best to gear up properly so as not to break your equipment or lose fish. We saw carp jumping consistently and not far in to our morning, Eric’s rod went off literally in his hand when he was picking it up to re-cast. This 16-pounder was the first fish of the day!

After Eric’s fish, Jaden’s rod went off twice in a row and he had a few seconds of battle before the fish came unbuttoned. Will joined us next and set up all his gear. We were now all ready and waiting for some more activity!

It seemed Jaden had the hot stick because his rod went off again with another fish! The pop-up rig was the favourite on the menu that day! This time I helped by steadying the rod as Jaden reeled the fish in. The fish took several runs but Jaden was able to get bring it to Will who was ready with the net and successfully land his first carp! I love this action shot!

Some passerby’s noticed the commotion and stopped in to take some photos. It was the most memorable fish of the trip, especially for Jaden as it was his biggest fish ever at 18 pounds! Way to go, Jaden! He was quite thrilled and told us it was the best day of his life.

After things settled a bit and we gathered ourselves, another rod went off and this time Terry had the opportunity to reel in a carp! Big fish = big smiles! We all had an awesome day! A huge shout out to Will at Peterborough Carping Guides for putting us in some prime carp waters and helping us all have such a memorable experience. I’m so glad that Jaden, Terry and Clara were able to join us too!

This trip was certainly a highlight of the summer with great fish and great memories with new friends! I cannot wait to be back in the Peterborough & the Kawarthas region! Thank you for stopping by to read about our adventure.

You can find me updating more frequently on social media: