After such a memorable experience two years ago while visiting Mille Roche Campground on the St. Lawrence River (in Ontario), I was thrilled to finally get back there this spring. The first time around we spent the weekend hauling in carp right from our waterfront campsite and recently went back for another round.

The string of islands along Long Sault Parkway provide great little bays and inlets for carp to move into. It’s a very unique area, just check it out on Google Maps and you’ll see what I mean. During the spring, carp move into these shallow warm waters in preparation for spawning providing angling opportunities right from shore. Carp are known to be found in this area through the spring, summer, and fall months as well. It’s a popular destination bringing in carp anglers from around the world.

This year I was joined again by Eric, but I had also invited some friends to join us. My puppy Blitz was also along for his first camping experience. What I love about carp fishing is how social it can be. The waterfront campsites at Mille Roche make it so convenient to get a line in the water from the comfort of your own camp chair with plenty of room for all the essentials of camping. It’s a beautiful location with spacious sites and you don’t have to rough it either. The washrooms and showers are nice and clean.

My weekend began on Friday evening when I arrived to the park. Eric was already there with our friend Justin who had stopped in for a few hours. Justin landed a nice carp before I had arrived!

Before I made my way to the park, I stopped in at the grocery store to load up on food for the weekend. We didn’t waste any time tearing into it either.

As soon as we sat down at the picnic table to eat, my rod went off with a fish! I’ve never seen three people drop their food so fast! Haha!

Justin departed for home as darkness fell and Eric and I called it a night so we could have an early start the following morning. My friend Jenn would be joining us along with two of her sons and her nephew. Our goal was to get them all into their very first carp.

I woke up and when I returned from the restroom, Eric had landed a nice catfish! That was a surprise catch as we had not caught any here in the past. I snapped a quick photo and Eric sent it back into the river.

We have been primarily using one rig over the past couple years for carp with much success: the 360 rig with a pop-up bait. The pop-up matched with the 360 rig make for a versatile presentation. It works great in locations with a soft bottom where normal presentations sink down going unnoticed by cruising carp. The key flavour has been the Mainline High Impact 50/50 Fruit Tella with the Hi-Visual Pinapple Juice coming in second. They smell amazing! No wonder carp love them so much.

Not too long after Eric’s catfish, Jenn arrived with Ryland, Griffin and Chase. They unpacked, got their tent set up and settled in. There wasn’t much of a wait before the first fish was on. Chase was up first to reel in his very first carp! With a little help from Eric, Chase brought this monster to shore and I netted it. We didn’t realize just how big it was until it was inside the net…

Wow! A 28-pounder is a heck of a first carp ever! I love this photo 🙂 After the excitement settled and our heart rates slowed down, we began grazing on snacks and food. So this is the other great thing about carp fishing… the snacking!

Jenn is always known to bring amazing homemade baked goods on our fishing trips and this time was no exception. It seems the talent for baking runs in the family as Jenn’s sister, Tara, made these amazing cupcakes for us! They were so cute that I didn’t want to eat them!

We didn’t see any more action on the rods during the day, but still had fun lounging around the campsite and playing some games with the boys. Jenn and I took Blitz on a walk around the park and he settled in nicely snoozing away in a camp chair.

As darkness fell, the boys called it a night settling into their tent. Jenn, Eric, Blitz, and I were sitting by the fire listening to the carp surfacing and the campfire crackling. Such a nice way to end the day. All was peaceful until the screaming sound of the bite alarm broke the silence and a fish was on! We hollered at the boys and they came barreling out of the tent in their pajamas. Ryland was up for his first carp!

Another big beauty of a fish weighing in at 18-pounds! Way to go, Ryland! It’s always exciting when these fish are hooked up and it’s fun working as a team to get them in. A big net and landing mat certainly help to manage these large lively fish. After a quick photo, the carp went back and shortly after we all hit the hay.

Morning came with the sounds of birds chirping and carp surfacing all around. It’s pretty neat seeing them jump clean out of the water at times but it’s also a tease! Part way through the morning, the boys left for the restroom to brush their teeth and I was helping Jenn pack up her tent when a rod went screaming! Although Jenn loves fishing, she wanted nothing more than the boys to have a great time and get to bring some carp in. She is such a selfless person and I’m so thankful to have connected with her through a women’s outing in the fall last year. She’s quickly become one of my closest friends. With the boys all away from the site, it was now Jenn’s turn to bring a carp in!

It’s so much fun seeing others experience just how strong carp are and most people are quite surprised by this underrated species. Jenn did an awesome job bringing this fish in! The boys arrived just after her fish was landed and we all jumped in a photo together (with Eric behind the lens of course). A great way to cap off our adventure! 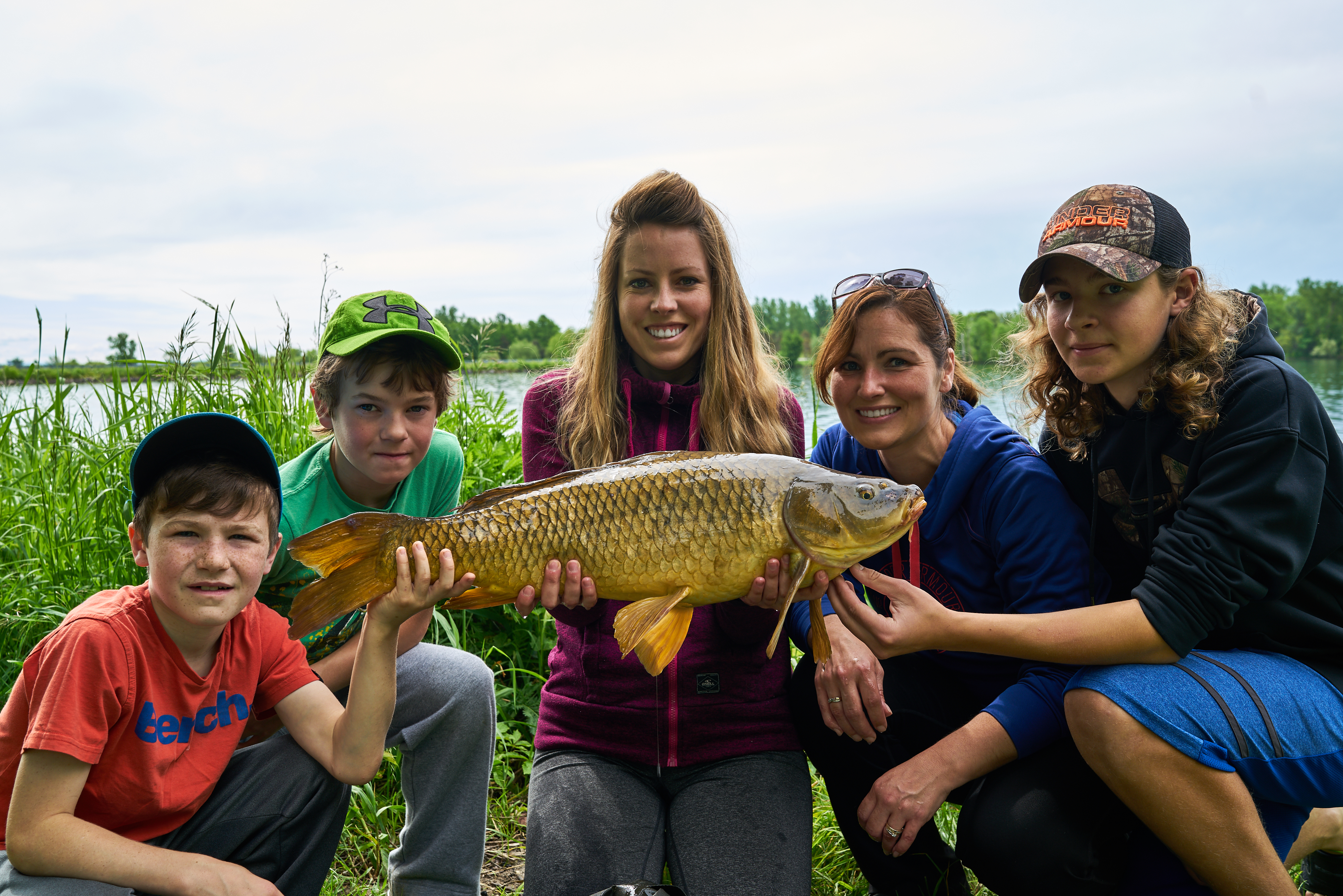 Although the bite was slower due to the fish beginning to spawn at this time, we all had a great experience. Griffin didn’t get into his first carp this time, but I look forward to our next adventure. Jenn and the boys made their way home and Eric and I stayed for a few more hours to see how the rest of the day panned out. Shortly after they left, my rod went off!

A quick photo before this fish went back into the river. These fish are such a riot!

We were lucky to have beautiful weather for the duration of our stay but we did get some rain during the last hour or so. Eric landed a nice carp just as we were packing up in the rain but we didn’t want to risk getting the camera wet for a photo.

This was our last carp outing of the spring and it was a memorable way to end the season. Carp are open all year to be targeted but as a multispecies angler I’m anxious to spend time on some other species!

Thanks to Justin, Jenn, Ryland, Griffin and Chase for joining us. We had a blast with you guys! I am quite certain our trip to Mille Roche Campground will be annual!

Thank you for stopping by. Be sure to subscribe below as I have some more stories on the way as well as some upcoming giveaways!

Connect with Ashley on social media and subscribe below to have new blog posts delivered to your email: