My fall fishing routine has been quite different this year! After winning first place at the FLW Canada Cup with my friend Erik Luzak in August, we qualified to represent Canada at a larger bass tournament in Alabama, USA! Now that I’m back home from this incredible 11-day adventure, I wanted to put together a blog to share my experience competing in the FLW Costa Championship on Lake Guntersville. It was the opportunity of a lifetime to be part of this event!

Our journey down to Alabama began on Friday, October 26th. We departed from Southern Ontario (Canada), driving for 18 hours straight until we reached Guntersville in Northern Alabama. We rented a house through AirBNB for the duration of our stay so that we could buy groceries, have a spacious spot to rig gear/ hang out, and cook/prepare meals. It turned out to be the perfect home base for this adventure.

The official practice period for this tournament was 4 days in duration. The 3-day tournament would begin on November 1st. Erik and I decided to pair up for the pre-fish to make the most of our time exploring this body of water that was new to us both. The scenery on Lake Guntersville was absolutely beautiful! Lake Guntersville is Alabama’s largest lake at 121kms in length, covering 69,000 acres. The Lake is part of the Tennessee River system and was created by Guntersville Dam. I was really impressed by the amount of boat launches here! All of the launches we used were paved and free of charge to use. Fishing is a lifestyle in Guntersville. I loved the atmosphere, the friendly locals, and of course the southern accents!

After watching countless videos, and reading many articles about fishing on Lake Guntersville, I assumed I’d be spending most of my time throwing topwater frogs and punch rigs around heavy vegetation at this time of year. We arrived in Alabama during a cold front, which changed our plans significantly. We found a few fish up in the shallows using the above mentioned methods, but the most consistent action came from focusing on areas with current, bait, and vegetation, that were adjacent to shallow bays or flats.

A Chatterbait was a staple for me back at the FLW Canada event on the Bay of Quinte, and it became a very important part of this trip as well. I also threw a variety of other presentations including: Alabama rig, Ned Rig, swimbait, flutter spoon, lipless crankbait, topwater frog, and a punch rig.

Our 4 days of pre-fish were fun but also very humbling. During practice, a 300+ boat tournament was also going on, which is really nothing out of the ordinary for Lake Guntersville. The lake receives a ton of pressure, and it really goes to show just how skilled the anglers on this water must be to find success. We had to work hard for our bites! FLW invited me to host a takeover on their Instagram account, so I was able to share one of my pre-fish days with their followers through short videos and photos. It was a fun experience and thankfully a few fish cooperated!

On our last day of pre-fish, Erik (right) and I were joined by Sean Palmer (left), another Canadian qualifier competing in this tournament. Sean earned a spot at the Championship through FLW Canada in 2017. It was great to have him as a roommate (the man has awesome stories!), and he was so much fun to get out on the water with, too! As you can see, Sean and Erik caught some nice fish during pre-fish as well.

Although most of you know me as a boat owner, I competed in the FLW Canada Cup as a co-angler (non-boater) and therefore moved on the Costa Championship as a co-angler. This means I would not be fishing out of my own boat, but instead be randomly paired with a boater each day of the event. This tournament was not a team format (like the FLW Canada Cup was), so all anglers would be fishing for their own 5-bass limits each day. Although it would feel a bit strange fishing from the back of the boat (as per tournament rules), I was excited for the opportunity to meet new anglers, fish a new body of water, and for the learning aspect of it all. This would be the largest tournament I’ve ever competed in.

Anglers were allowed to weigh in 5 bass per day with a minimum length of 15 inches for smallmouth and largemouth bass. Spotted bass were also permitted with a minimum of 12 inches in length. There were around 400 anglers that qualified for this event from 9 different countries. Anglers qualified either as a pro (boater) or a co-angler (non-boater). In addition to representation from Canada and the United States, there were competitors hailing from South Africa, Korea, China, Mexico, Italy, Portugal, and Spain. FLW stated that this was their largest international event yet. What an incredible experience to be part of!

Our partners were drawn for day one the night of the meeting, giving us a chance to get in touch that evening to discuss strategy for the following day. I found out that I would be fishing with Kent Ware, a Guntersville local. I also had the chance to meet his lovely wife and daughter who accompanied him to the meeting. I learned that Kent occasionally fishes tournaments with his wife and daughter. It is slightly nerve-wracking jumping in a boat with a complete stranger, but I was at ease instantly after chatting with Kent and his family. I knew we would have a fun day on the water.

I was so anxious to finally get this tournament started and was thankful for better weather this time around.  Kent and I blasted off from Guntersville City Harbor at 7:30am with a 4:00pm check-in time.

I learned a lot from Kent who sure knows his way around this body of water. He’s a very knowledgeable angler and a super kind person. Even though it proved to be a challenge to get bites, we were each able to get a few fish in the boat. Although I had a few more bites, I only found 3 keepers. Our day flew by and it was time to head back to the harbor.

I ended up with 7 pounds, 14 ounces for the day, which was enough to put me in 26th place out of 196 anglers on the co-angler side. Fishing was much different and more challenging than back home. I had a fun day and felt optimistic for the final day. Most of my bites came on a ChatterBait and an Alabama rig.

On the second and final day of the tournament, I was paired up with Andrew Upshaw from Texas. Andrew is a skilled angler who has earned his place fishing the FLW Tour. It was great to share a day on the water with him and hear about his experiences. As with each day prior spent on Lake Guntersville, it was still tough to get bites. I landed my personal best Alabama rig fish, which ended up being my only keeper of the day. No matter the results at the end of the day, I felt very grateful just to have earned a spot fishing against such amazing anglers from around the world. Additionally, I was enjoying the warmer weather as it was snowing back home in Ontario!

I wanted to mention just how fortunate I feel to have had this amazing opportunity! I started this blog nearly 10 years ago to document my travels and it means so much to me to have people to share these stories with. Thank you! With that being said, this adventure wouldn’t have been quite the same without my amazing family. My parents, along with my significant other, Eric (not to be confused with Erik, ha, ha), drove all the way down from Southern Ontario to cheer me on for this tournament. I’m lucky to share so many adventures with Eric who loves being out on the water as much as I do. During this trip he happily and proudly supported me from the sidelines and captured some amazing images in the process. His photography skills lead him to a spot on a media boat to take photos during the tournament. My parents aren’t anglers themselves, but seeing their proud expressions when I brought my fish up to the scales made me feel very blessed for their support. A very special thank you also goes to my brother who stayed home to care for my grandparents (and my puppy) while my parents took this well-deserved mini-vacation. We don’t have a big family, but I couldn’t ask for a better, more supportive one!

I also wanted to say a big thank you to FLW Canada for a top notch event in August which provided us this opportunity to complete in Alabama! I am grateful to the companies that have supported me this year and in years past: Alumacraft Boats, Yamaha Motor Canada, URBAN SPORT, Minn Kota, Humminbird, Mustang Survival, Striker Ice, and SAIL!

And Finally… The Results! 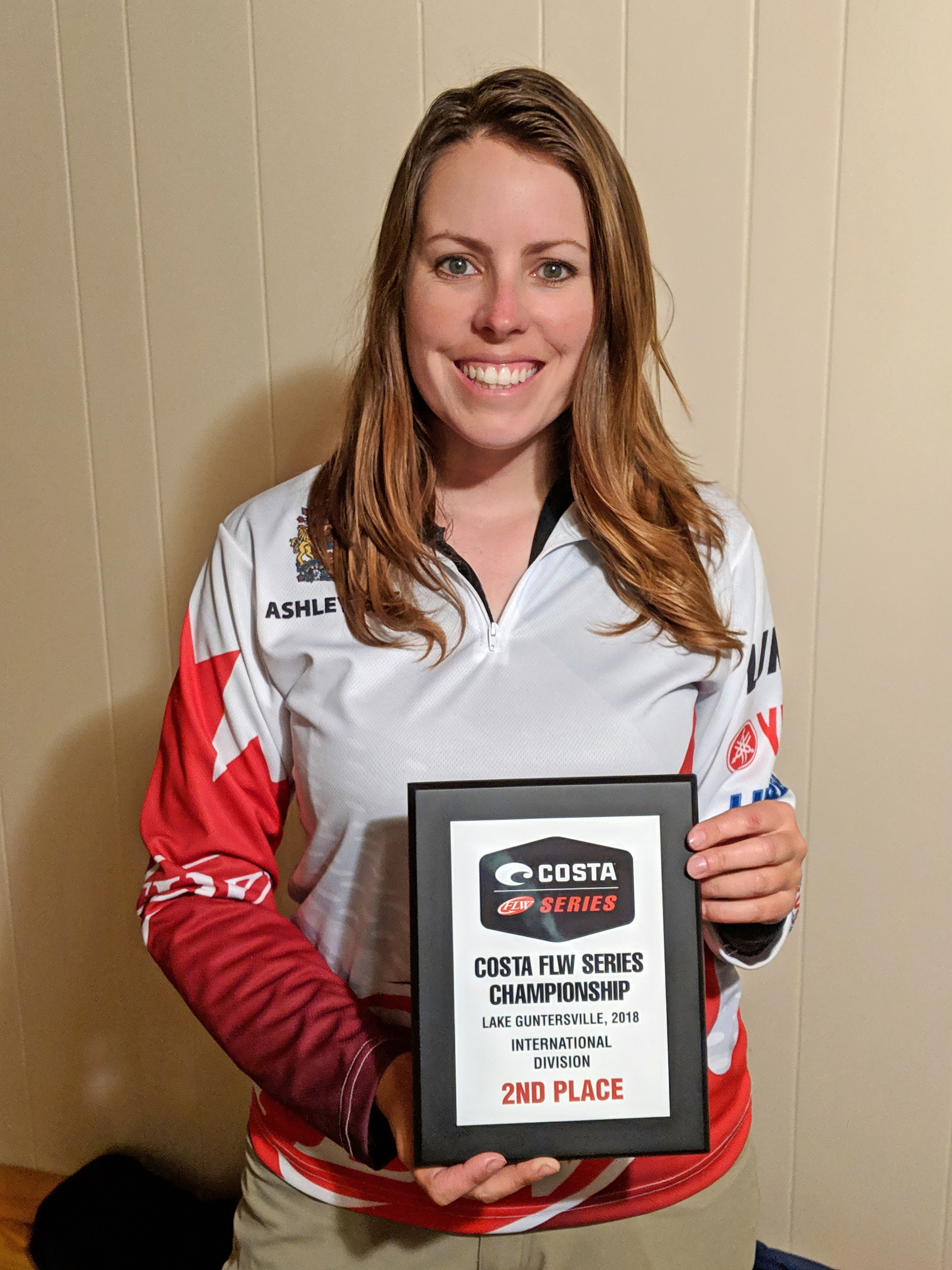 Qualifying for this tournament was a dream come true, and having the chance to fish these waters was a bucket list experience for me! I ended up finishing 44th place on the co-angler side out of 196 anglers, and earned 2nd place co-angler in the International Division! Payouts in this tournament went to the top 40 anglers on both the pro and co-angler side. On day one I was sitting in 26th, but unfortunately I was one fish short on day 2 (7 ounces, to be exact) from taking home a cheque in this event. SO close!

Cooper Gallant finished 3rd place on the pro side in the International Division. Erik Luzak took home 1st in this division, which earned him a spot at the Forrest Wood Cup next year!! HUGE congrats to Erik on this amazing accomplishment! The Forrest Wood Cup is the highest level tournament in the FLW organization. It’s pretty incredible to have Canadian representation at this tournament, and to have been apart of Erik’s journey in making it to the Cup.

I also wanted to say a heartfelt thank you to those of you that have followed along throughout this journey. So many of you were cheering us on during the FLW Canada Cup on the Bay of Quinte, and all the way through to this Championship event. This experience is one of the highlights in my life thus far that I’ll certainly treasure forever. As the temperatures are dropping here in Ontario and the hard water season grows near, I’m even more excited for next season. Perhaps more tournaments will be in my future? We shall see!